FRASER FORSTER may consider taking a pay cut to end his playing career at Celtic.

That’s the thoughts of Hoops goalkeeping legend  Pat Bonner who believes the on-loan Southampton shotstopper could see it as being worthwhile in slashing his wages to continue his love affair with the Parkhead club.

Forester has excelled since returning to the champions having left the Hoops in a £10million switch to the south coast club in 2014.

The 31-year-old former England No.1 is under contract to the Premier League side until June 2022 and his basic weekly salary of over £70,000 is an obvious obstacle to Neil Lennon’s hopes of re-signing him on a permanent basis.

But Bonner, speaking to The Scotsman, said: “The grass is not always greener somewhere else. Now, of course, Fraser is on big money with Southampton. It’s incredible money players get down south and it’s hard to know if Celtic could even afford to take him for half his money.

“Possibly not, but he seems to be happy at Celtic. He’s made his money and is this the place for him to spend the rest of his career? To finish his playing days at a club which he enjoys?”.

“I talked with Neil Lennon in the past about what does he want as a goalkeeper and he likes a big and imposing guy.

“Fraser is an immense presence. He doesn’t come out for many crosses given his size, but I think he has really improved his work with his feet.

“Since he’s been down in England, he seems to have learned and got better with that, even if he’s never going to be brilliant at it

“But he makes the big saves at the big times and I admit he’s actually done even better than I thought he would since coming back.

“When he signed for Celtic the first time around, he was a big goalkeeper, but seemed a little bit sluggish and slow. He seemed to do a lot of work on his speed and movement and he turned out to be very good.

“Having been away from Celtic for such a long time and missed a lot of football during the latter stages of his time at Southampton, I wondered if he might have lost a bit of that speed with his lay-offs.

“But he’s still got it and that’s the critical factor for him because he is such a big guy. Yes he’s tall, but that’s not enough for a keeper, you need momentum and quickness . All of that stuff is part of the package. 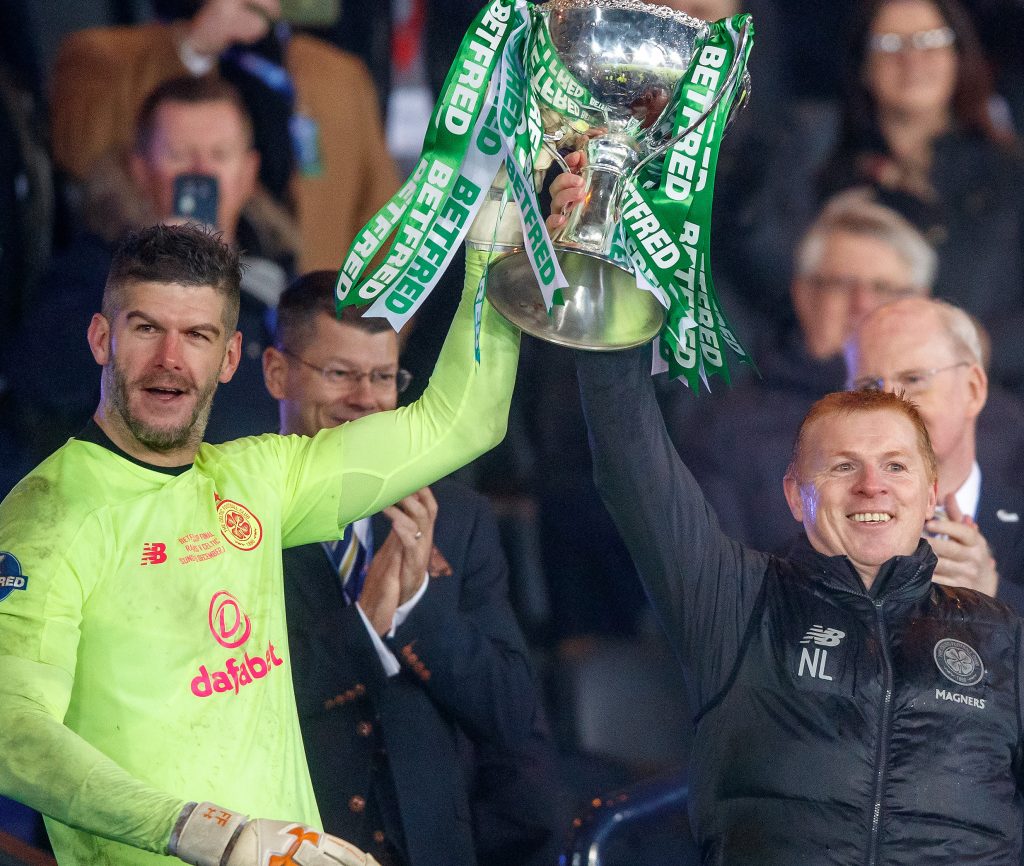 HAMPDEN HOORAYS…Fraser Forster and boss Neil Lennon after the 1-0 success.

“I think it’s also very important that he enjoys being at Celtic. He feels that people respect him and value him.”

Forster’s highlight since his Hoops comeback was his unbeatable performance in the 1-0 Betfred League Cup Final against Steven Gerrard’s Ibrox outfit earlier this month.

He has played his role in helping the team rack up 10 successive Premiership wins and he will be the last line of defence against St Mirren in Paisley on Boxing Day and, barring injury, likely to be in again to face Alfredo Morelos and Co at Parkhead on Sunday.

Scotland’s title kings are looking for a ninth successive championship and are five points ahead at the top as they prepare for two games before the winter break.

Forster is ready to put up the shutters as he once again proves his worth to the team.