IBROX was the setting for a game where I came off the pitch a bit demoralised. It was back in the Sixties and we had lost 1-0. It wasn’t the defeat that got to me, though.

It was the fact I had been involved in a sickening collision with their left-back Davie Provan that saw him carried off with a broken leg. I was horrified when I realised the Rangers defender was so badly injured. Tommy Gemmell insisted he could hear the awful crack as Provan’s leg gave way. And he was on the other side of the pitch, too.

There is always a lot of innuendo, insinuations and wild stories when a player is seriously injured and, with the Old Firm, there are always added ingredients. You are on the receiving end of some outrageous claims and, naturally enough, some of the Ibrox support believed I had ‘done’ their player. Absolute nonsense. 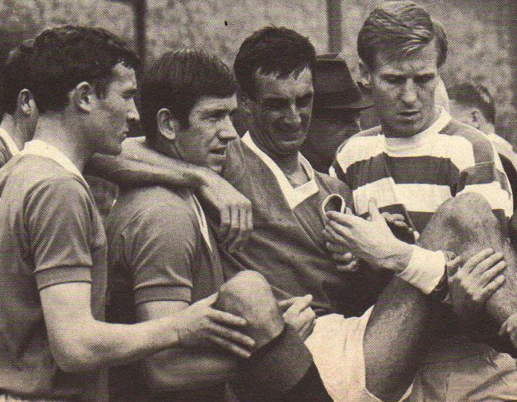 HELPING HAND…Billy McNeill and his Rangers counterpart John Greig carry off broken-leg victim Davie Provan after an incident with Bertie Auld in September 1967. A concerned Sandy Jardine looks on.

I had switched over to the right for a brief spell as Chopper, Bobby Murdoch, moved to the left. We did that every now and again just to freshen things up and give the opposition something else to think about. I remember chasing a ball down the right flank at the Celtic end of the ground that afternoon.

I was very much aware that Provan was coming across to tackle me. I got there a fraction before him to send over a right foot cross. Just as I delivered the ball, the Rangers player’s outstretched left leg appeared on the scene. I couldn’t stop my momentum and, equally, he couldn’t pull out of the tackle.

There was a crunch as my boot made contact with his leg and he went down. I knew immediately it was a bad one. I felt sick, but it was a complete accident. Later in another Old Firm derby Rangers skipper John Greig broke Bobby Lennox’s leg and, as I said earlier, Celtic fans were far from convinced it was purely accidental. Again, that wasn’t fair on Greigy. Bobby was the first to absolve the Rangers player of all blame. 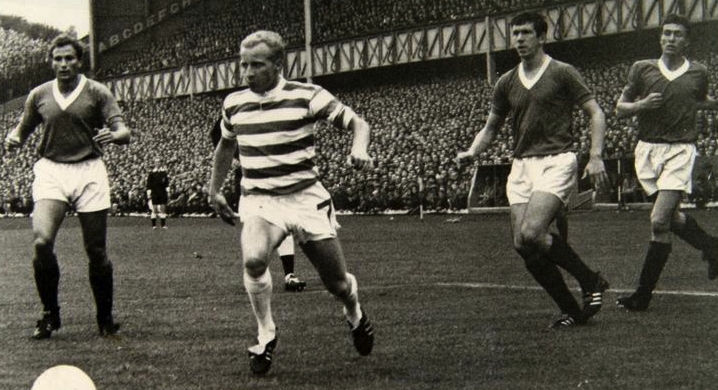 I should say here that Davie Provan was a player for whom I had massive respect. I saw him play against Jinky on loads of occasions and I don’t think he ever kicked our winger. He might have been given the runaround, and I hope he doesn’t mind me saying that, but he never stooped to underhand means to stop Jinky.

It must have been frustrating facing the Wee Man when he was at his tantalising best. Being taken apart in front of thousands watching on cannot be too pleasant. But Davie never lost the rag and never tried to boot our player. You could not say that about too many left-backs Jinky came up against back then.

In fact, I rated the Rangers lad so highly as a person as well as a professional that I gave him a job on our backroom staff when I was manager of Partick Thistle. And, just to underline how well we got on, Davie was a guest among the Lisbon Lions at my surprise 70th birthday bash at the Burnside Hotel in Rutherglen in March 2008. 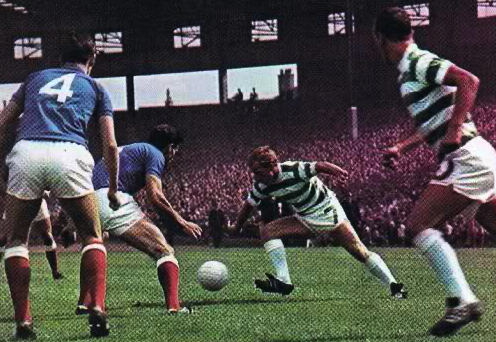 ON THE RUN…Jimmy Johnsone lives up to his Jinky nickname as he takes on Rangers defender Roger Hynd. Bobby Lennox and John Greig look on.

He reminded me that night of the story of how he reckons he saved Jinky’s life!

Some nutcase managed to get onto the pitch at Ibrox and made a beeline for our player. Davie is convinced the yob was carrying some sort of object in his hand. You could be certain he wasn’t about to make a presentation to Jinky to congratulate him on another fine performance.

However, as he raced past the Rangers player, Big Davie did a quick bit of thinking and grabbed the would-be assailant. He wrestled him to the ground and the police eventually frogmarched the intruder off the field and up the tunnel.