CELTIC’S summit with the SFA bosses will be held next week as the champions demand clarification in the rules that saw Alfredo Morelos escape retrospective punishment following THREE incidents in the game at Ibrox last weekend.

The controversial Colombian dodged even a word of caution from referee John Beaton, despite being clearly seen kicking Hoops skipper Scott Brown after only three minutes.

Morelos followed that up by making a crude gesture as he grabbed at Ryan Christie’s groin area and topped it off with a sickening and obvious stamp on the grounded Anthony Ralston, an unwarranted action that left the right-back injured.

Beaton admitted he saw all three infringements and decided no action was required. The SFA were unable to dish out punishment because the whistler had made such a revelation. 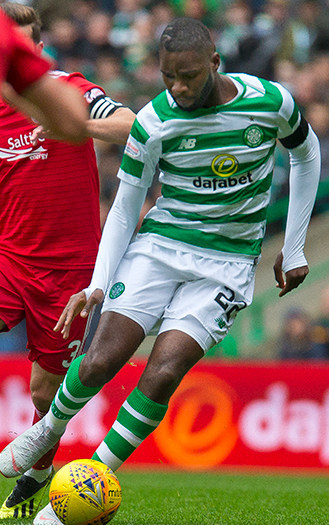 OFF-DAY…Odsonne Edouard before the “very reckless” challenge from Aberdeen’s Scott McKenna saw him helped off in the first-half of Celtic’s 1-0 win in September.

That being the case, nothing further could be done and Morelos, red-carded three times this season, was given the all-clear to continue playing.

Celtic have demanded clarity from Beaton and it’s believed they also want the entire system opened up to scrutiny and consultation.

The champions are believed to be bewildered by the Scottish soccer’s ruling body by their bizarre u-turn after Aberdeen defender Scott McKenna was banned earlier this season following a wayward challenge on Hoops striker Odsonne Edouard that led to the Frenchman being forced to come off in the 35th minute..

No action was taken by referee Bobby Madden – and the Celts were denied a clear penalty-kick at the same time – and the bungling official admitted he had witnessed the chest-high assault which was later condemned by Brendan Rodgers as being “very reckless”.

McKenna was allowed to remain on the pitch before justice caught up with him later when a fast-track decision was made to suspend him for two games.

Why was McKenna punished and Morelos not? The Celtic chiefs will now demand complete transparency in the rules.