SCOTT BROWN agreed a £4.4million switch from Hibs to Celtic in May 2007 and former boss Gordon Strachan promised the Hoops fans “something special” from the player who had just inspired the highest-ever fee between Scottish clubs.

The all-action midfielder insisted he had joined up at Parkhead to win silverware.

Neither Strachan nor Brown got it wrong with their predictions.

The 34-year-old ex-Scotland international onfield leader made his 500th appearance for the club in the 3-0 Premiership triumph over Motherwell at Parkhead on December 19 2018. He was given a couple of rests during the season following a hamstring problem that saw him hirple off diring the 4-2 win over the Easter Road side in Glasgow on October 20.

It’s been a rollercoaster THIRTEEN-YEAR journey for the player affectionately known as Broony to his team-mates and the supporters.

CQN‘s ace snappers have been along for the thrilling ride to capture the images en route to the dynamo’s place in the Celtic Hall of Fame. Here is the pick of the pics over the dramatic years.

THE SURVIVOR..Scott Brown (fifth from the left) leads the applause among his team-mates before a game in 2011. Remarkably, he is the ONLY player still at the club. Left to right: Mark Wilson, Lukasz Zaluska, Anthony Stokes, Daniel Majstorovic, Brown, Ki Sung-Young, Kelvin Wilson, Kris Commons, Gary Hooper, Charlie Mulgrew and Joe Ledley. 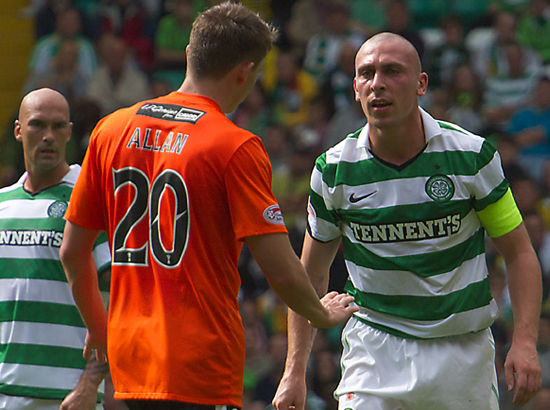 SCOTT v SCOTT…the Celtic skipper has something to say to Dundee United’s Allan during a game in August 2011. They later became colleagues at Parkhead! 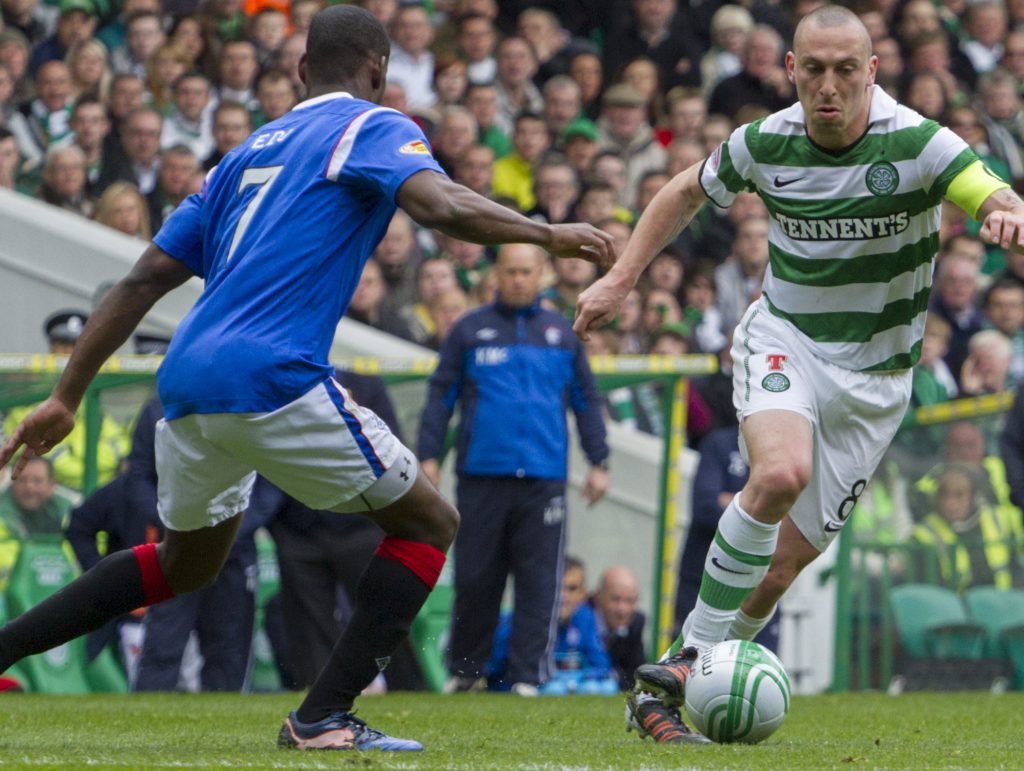 FOLLOW THE LEADER…Scott Brown is about to weave away from Ibrox midfielder Maurice Edu. 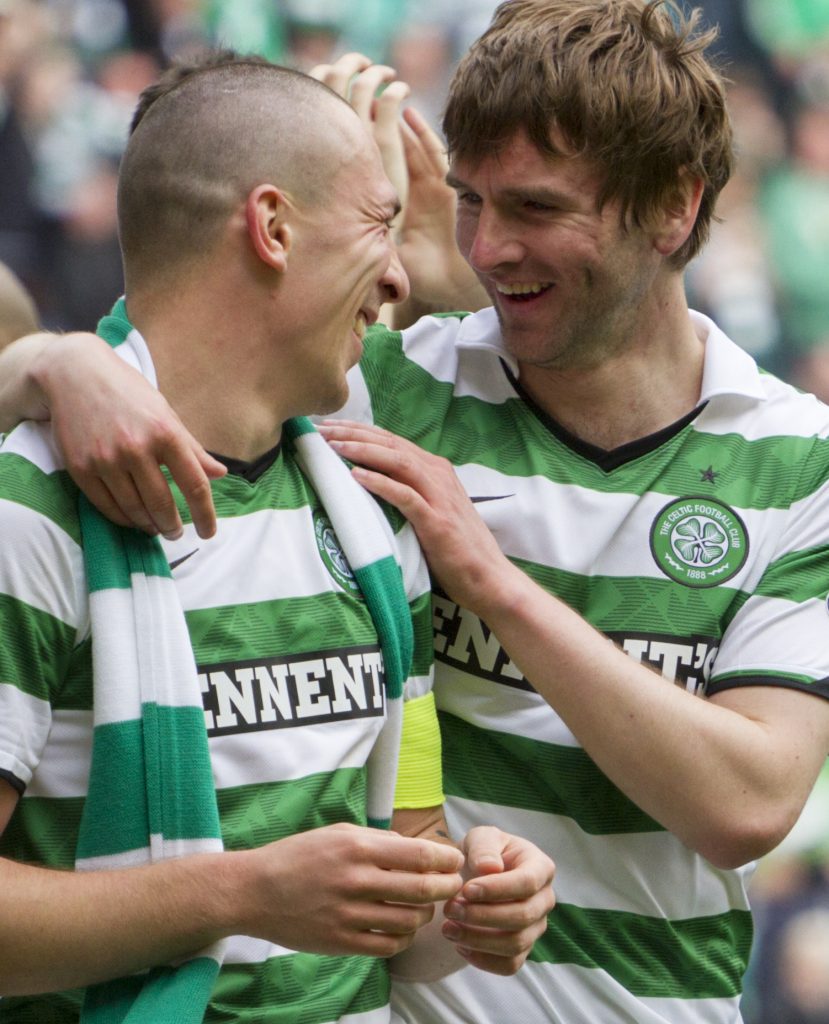 LAUGHING BHOYS…Brown enjoys a moment with Paul McCourt aka The Derry Pele. 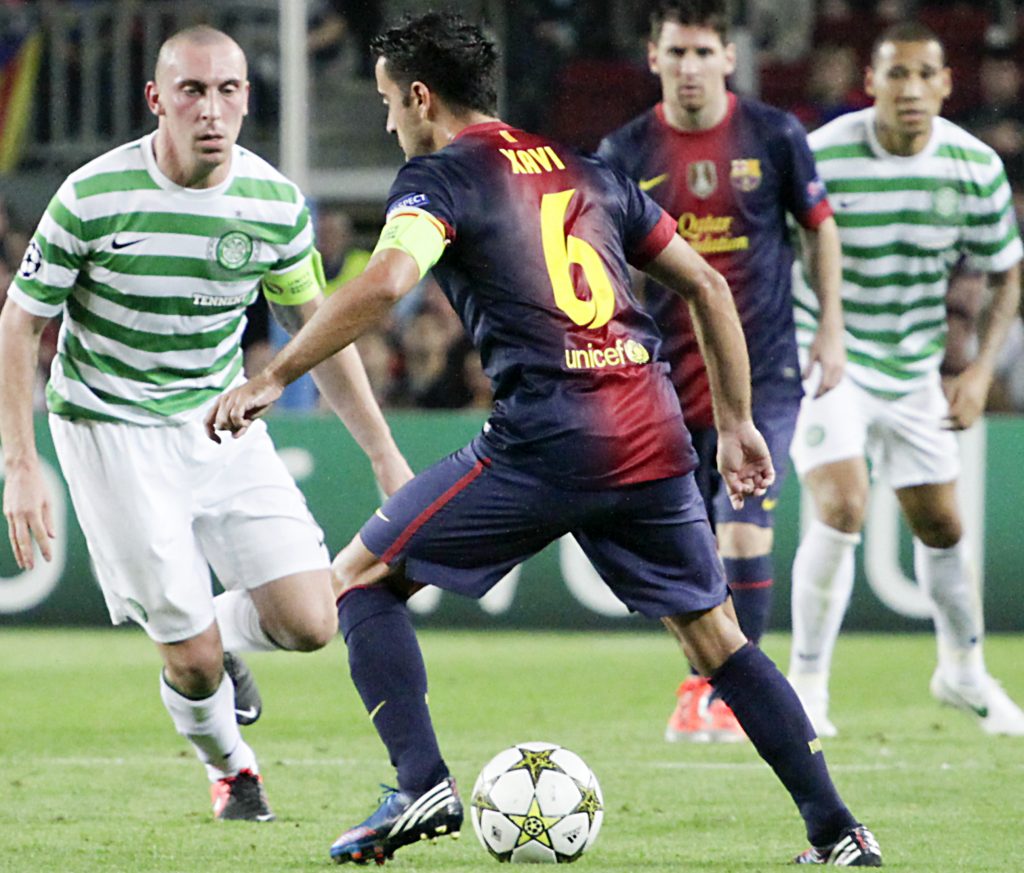 EYES ON THE BALL…the Celtic skipper is about to challenge Barcelona legend Xavi in November 2012. Lionel Messi and Kelvin Wilson look on. 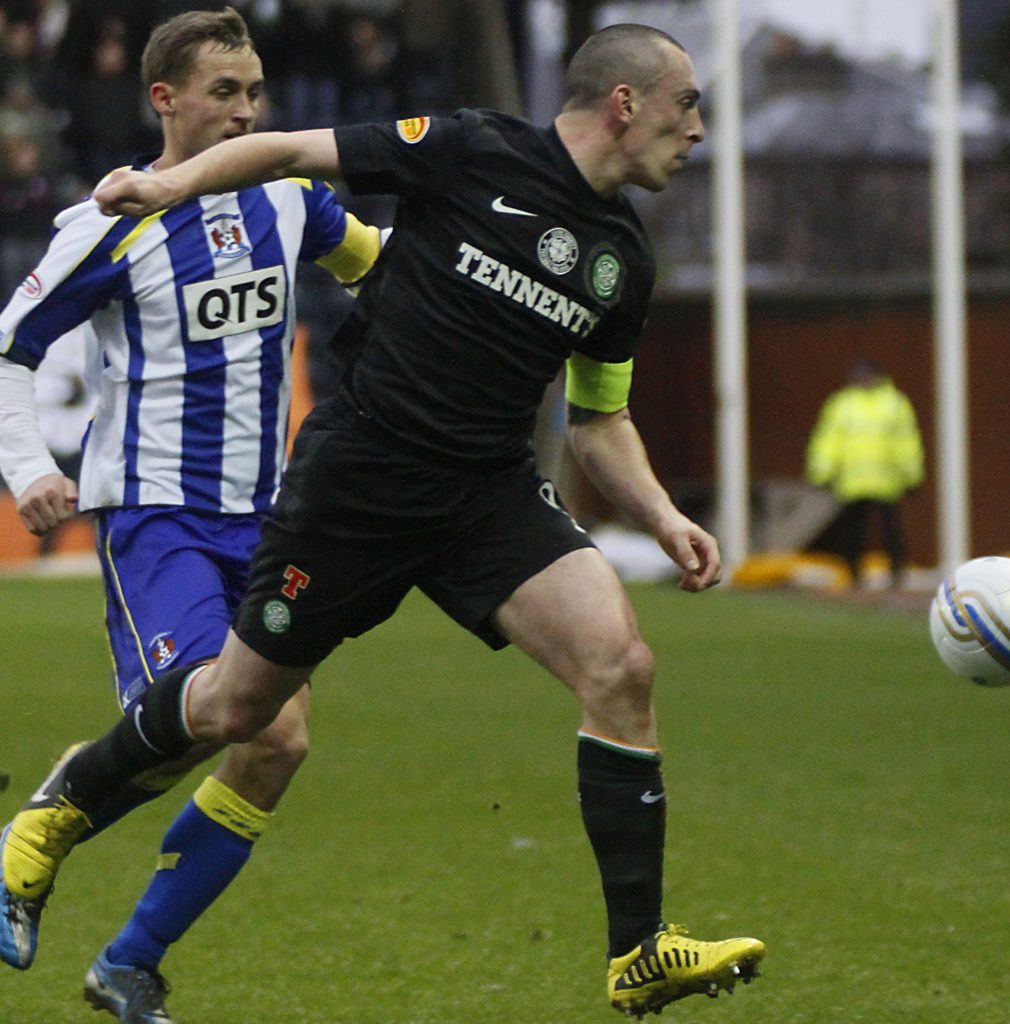 CRUNCH…Scott Brown wins the ball from Kilmarnock’s Liam Kelly in a December 2012 clash. 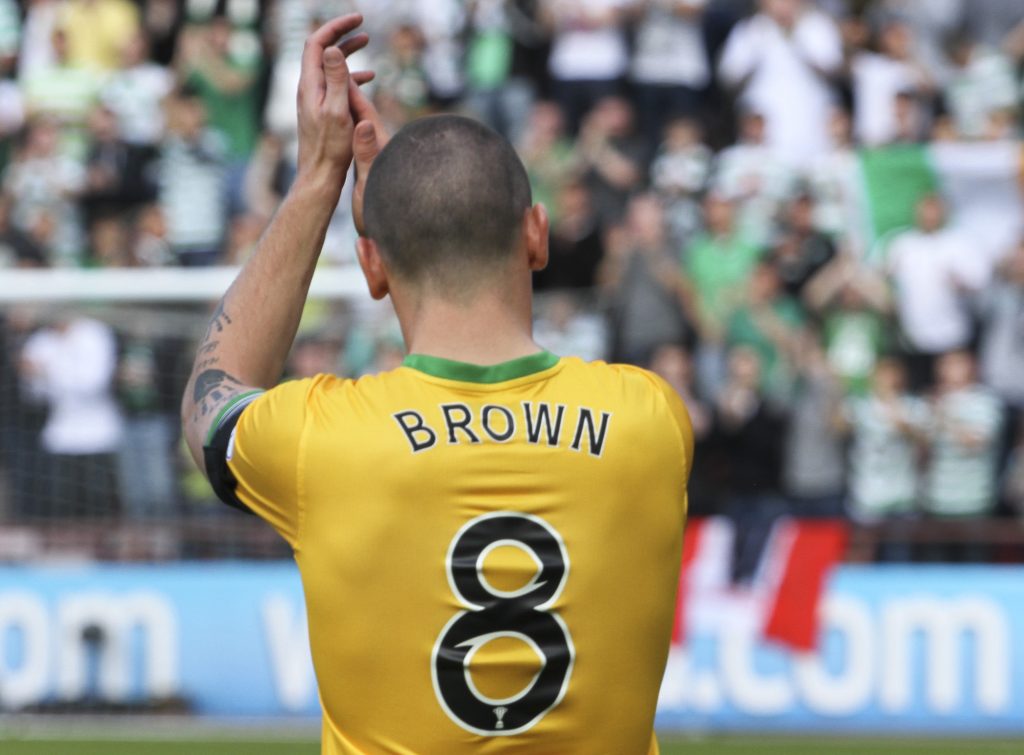 THANKS, FANS…Scott Brown applauds the Celtic supporters at Tynecastle in September 2013. 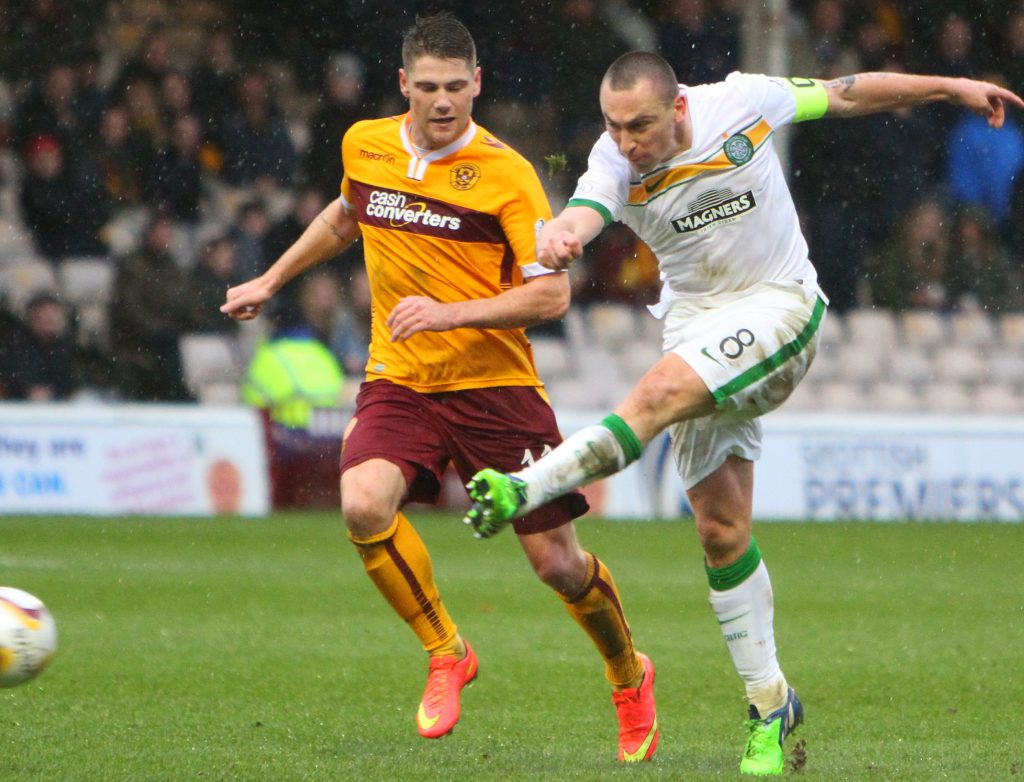 WALLOP…Scott Brown lets fly at the Motherwell goal in December 2014. 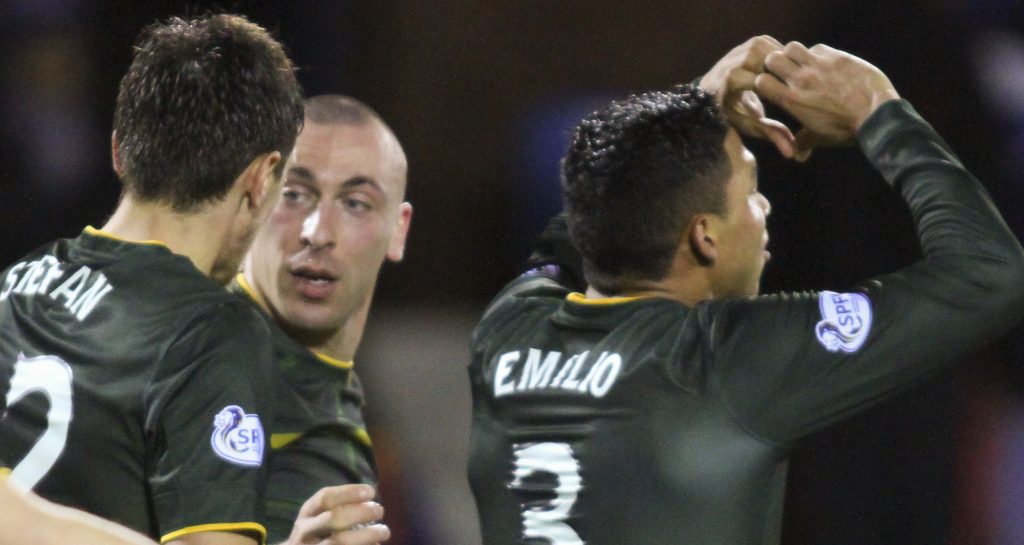 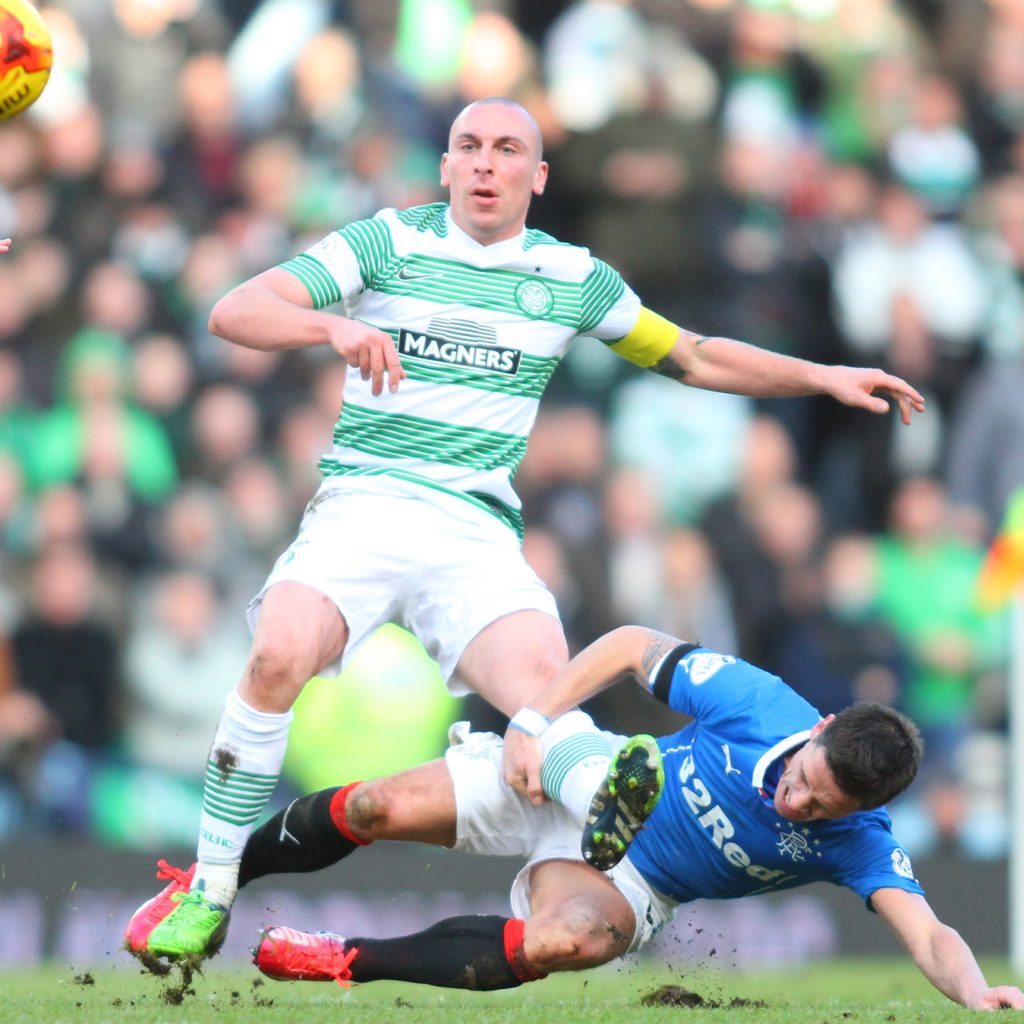 NO CONTEST…Scott Brown sweeps aside the challenge of Ibrox midfielder Ian Black in February 2015. 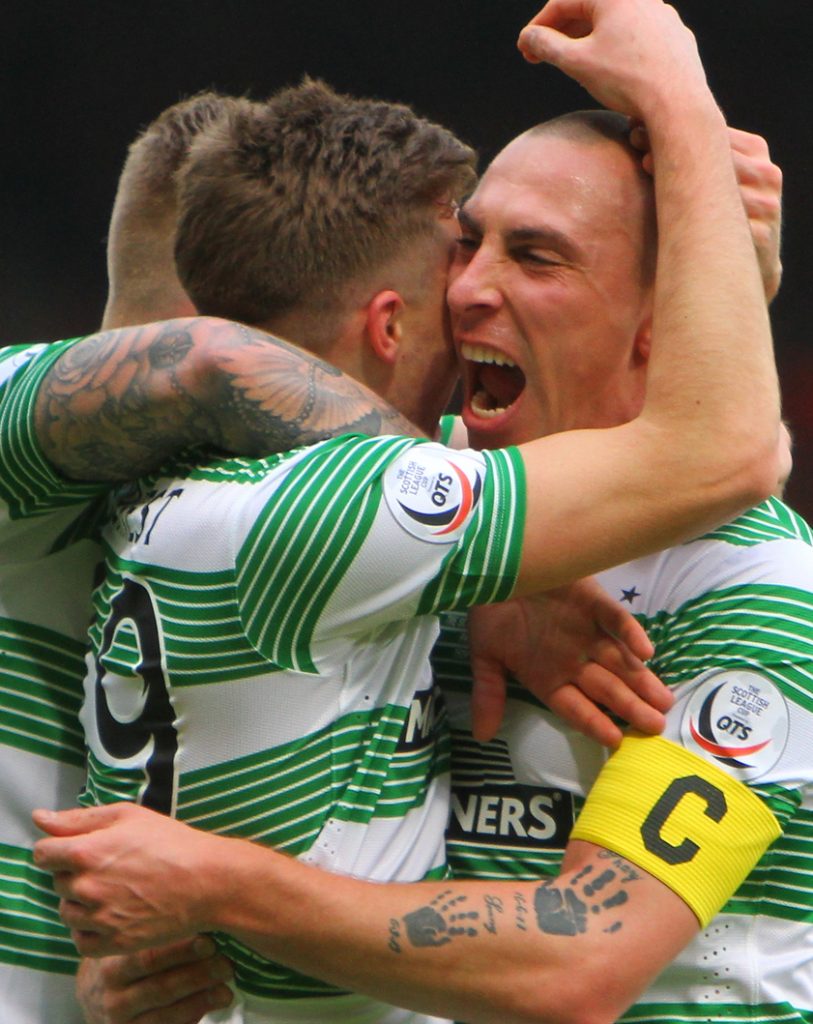 CUP THAT YELLS…the Hoops skipper congratulates James Forrest after his goal in the 2-0 League Cup Final win over Dundee United in March 2015. 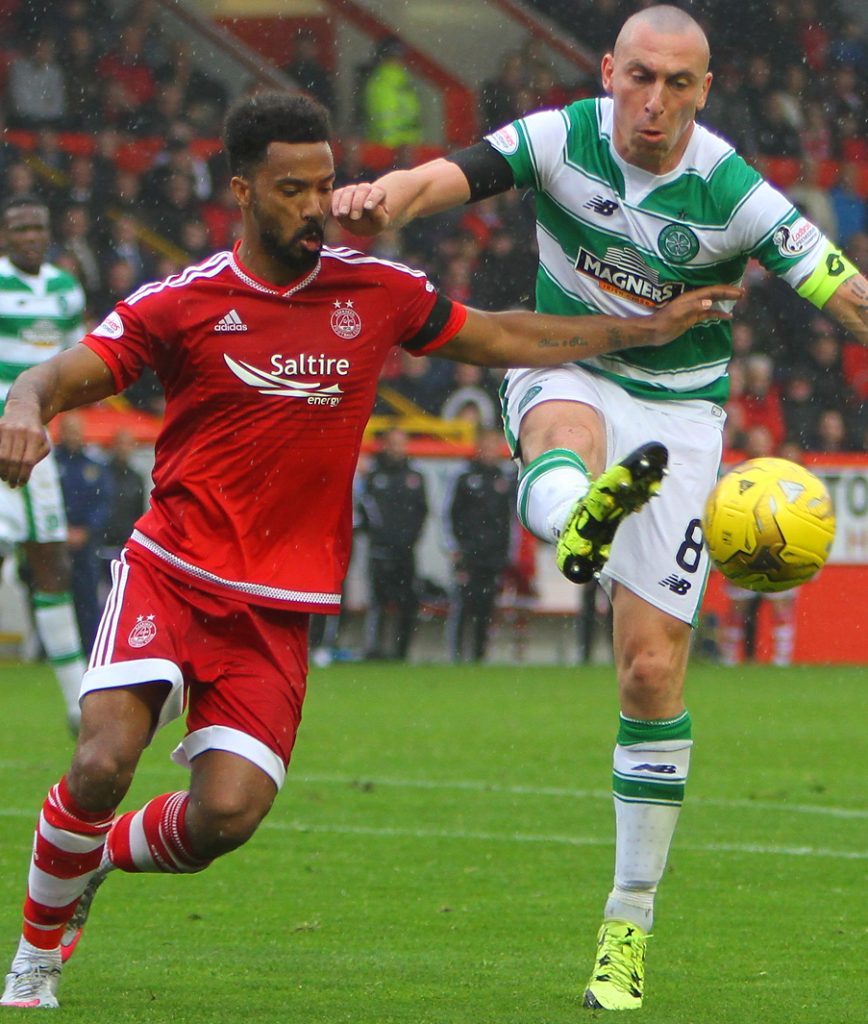 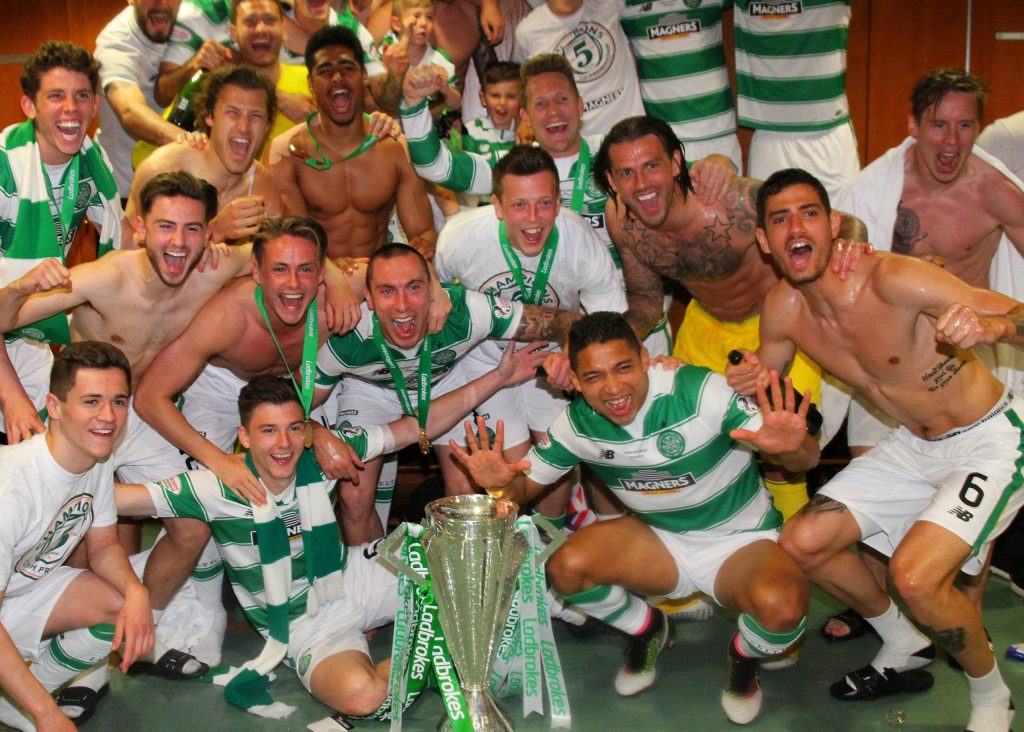 TITLE SUCCESS…the Celtic leader shows his delight after the side’s 7-0 victory over Motherwell on the day they lifted the trophy for the fifth successive season. 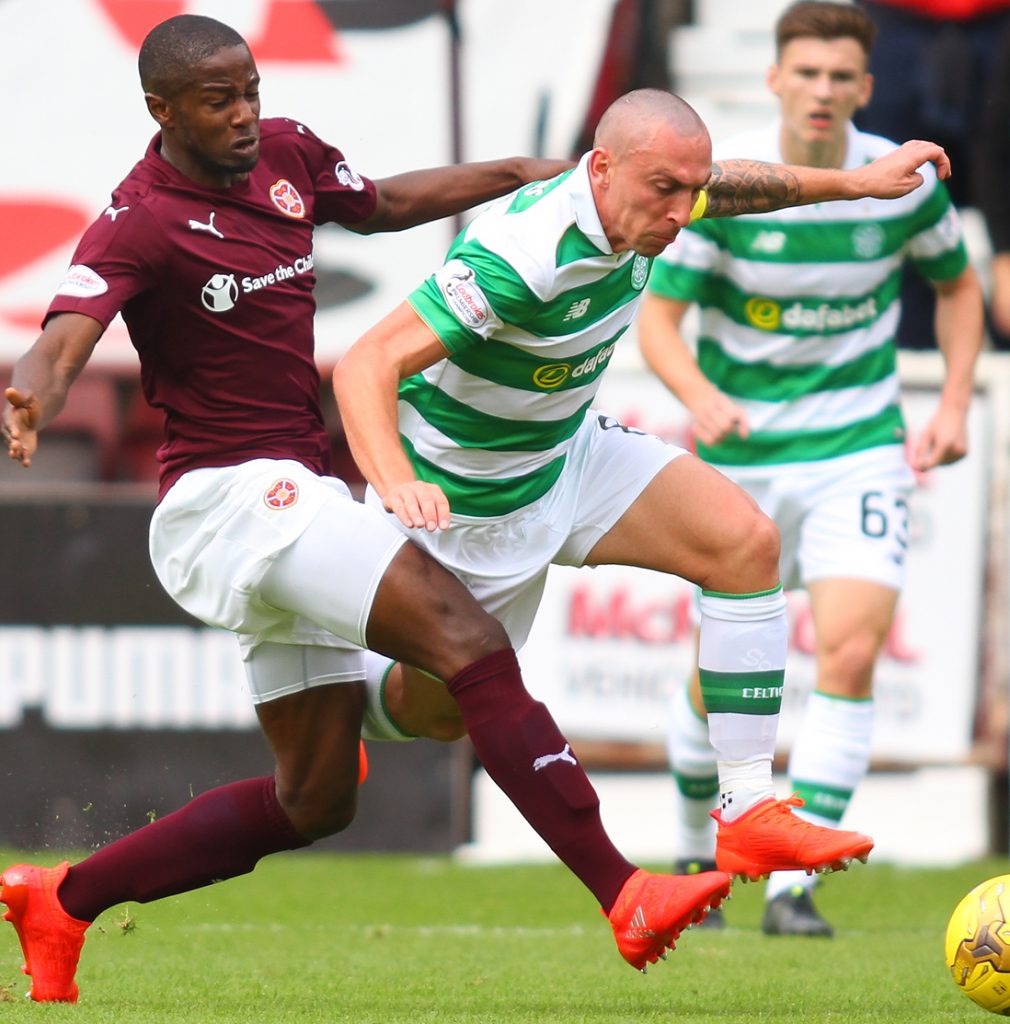 A NEW ERA…Scott Brown brushes aside a Hearts challenger as he helps to guide Celtic to a 2-1 win at Tynecastle in Brendan Rodgers’ first Premiership game in charge of the side. Kieran Tierney looks on. 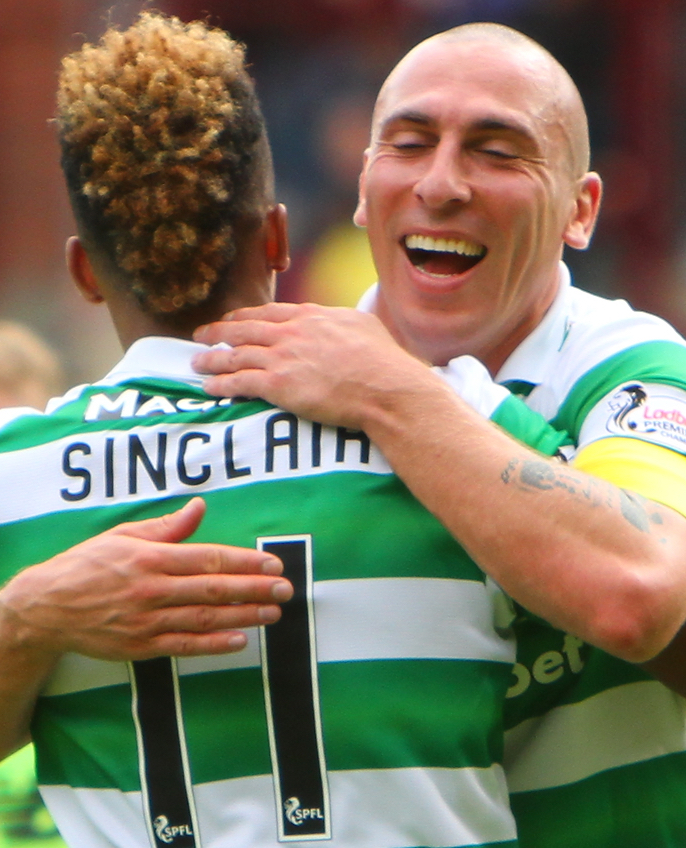 ELEVEN FROM HEAVEN…Scott Sinclair gets a hug from his new skipper after netting the winning goal against Hearts on his debut in August 2016. 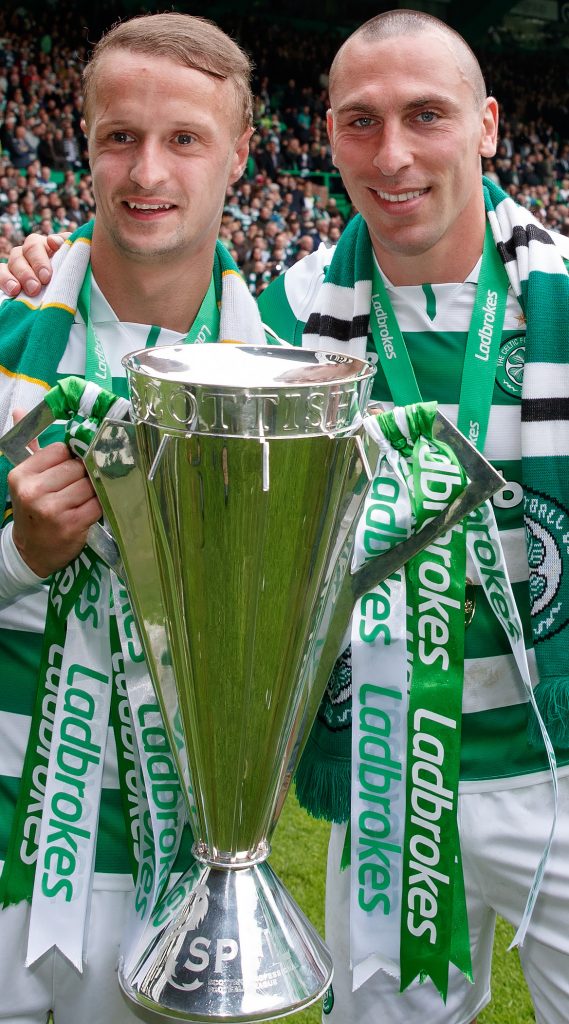 PRIZE GUYS…title No.6 is in the bag and it’s smiles all round for Leigh Griffiths and Scott Brown. 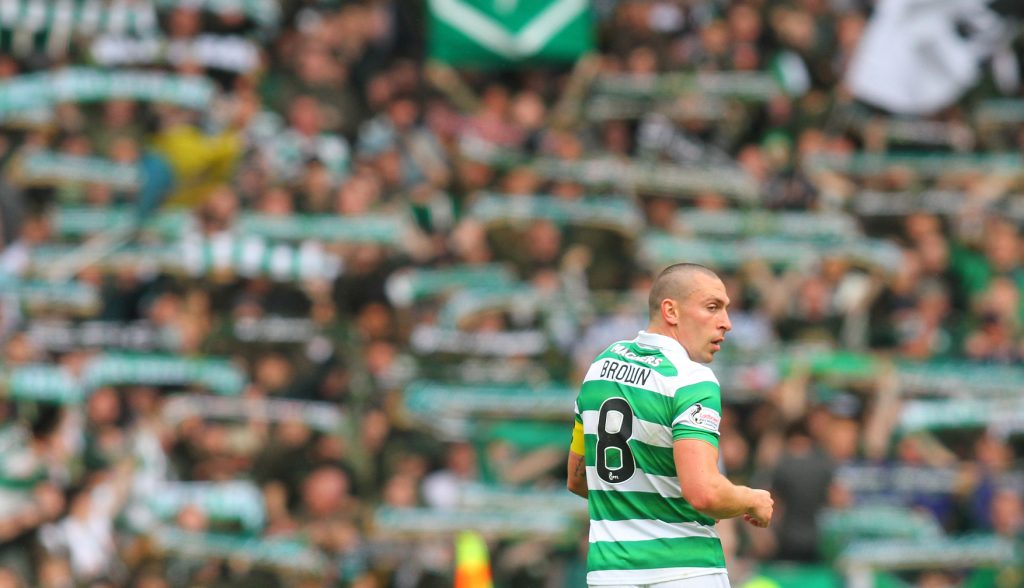 A GREEN-AND-WHITE SEA OF ADULATION…Scott Brown and the Celtic support. 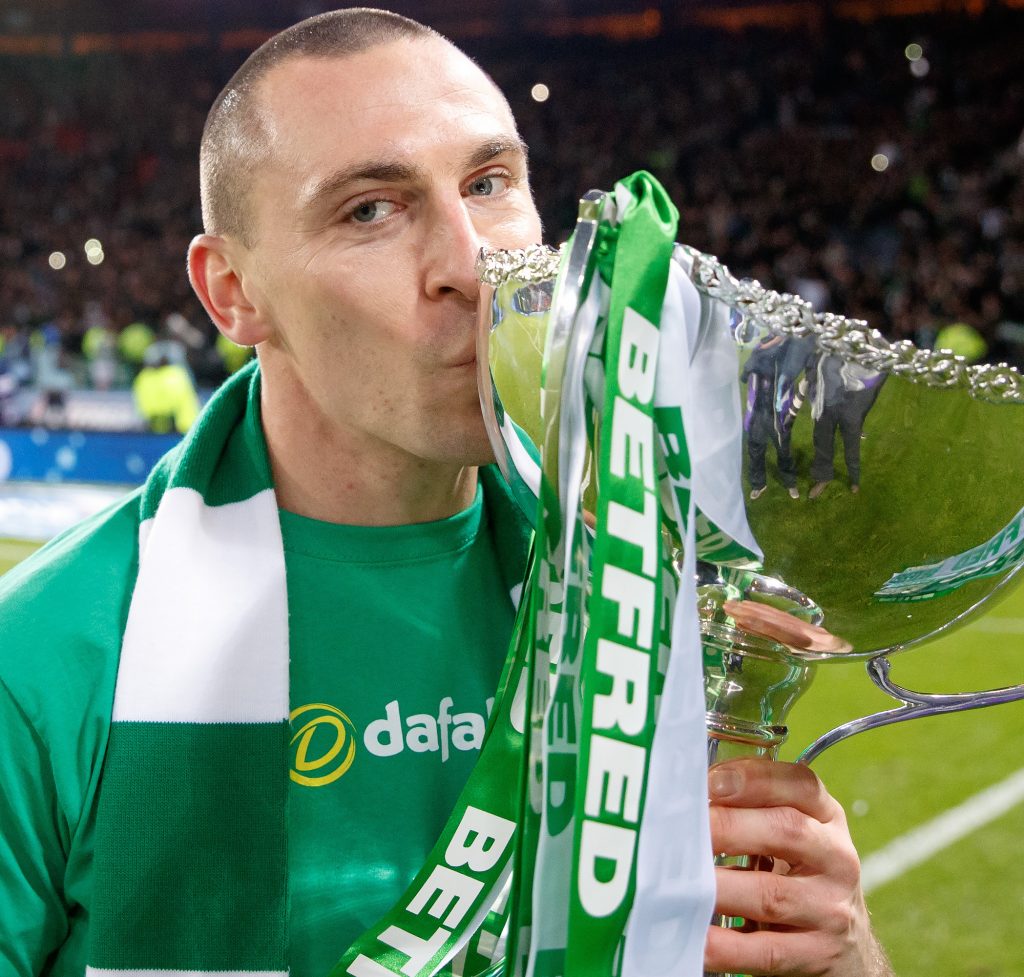 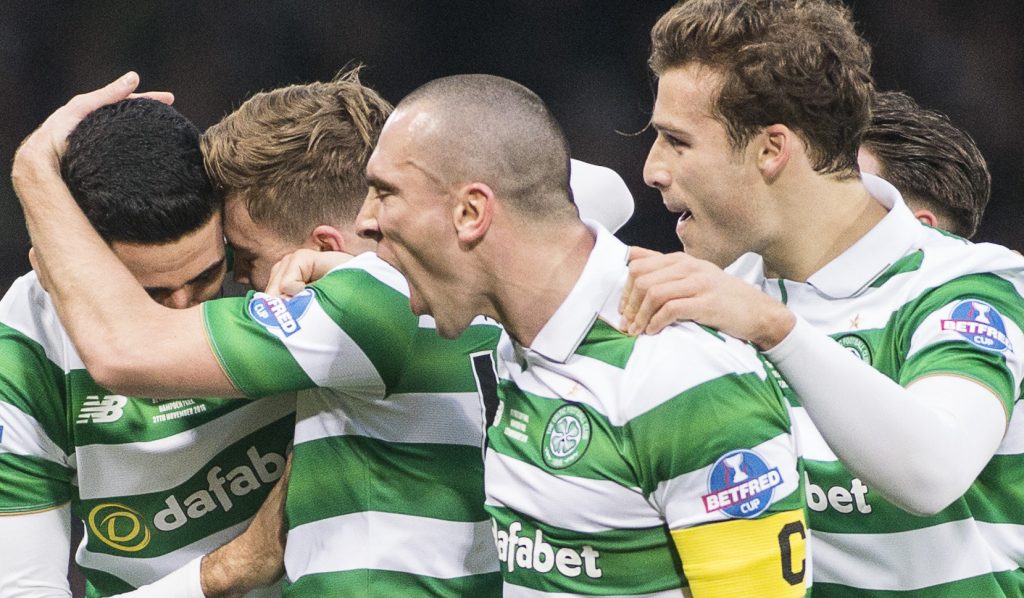 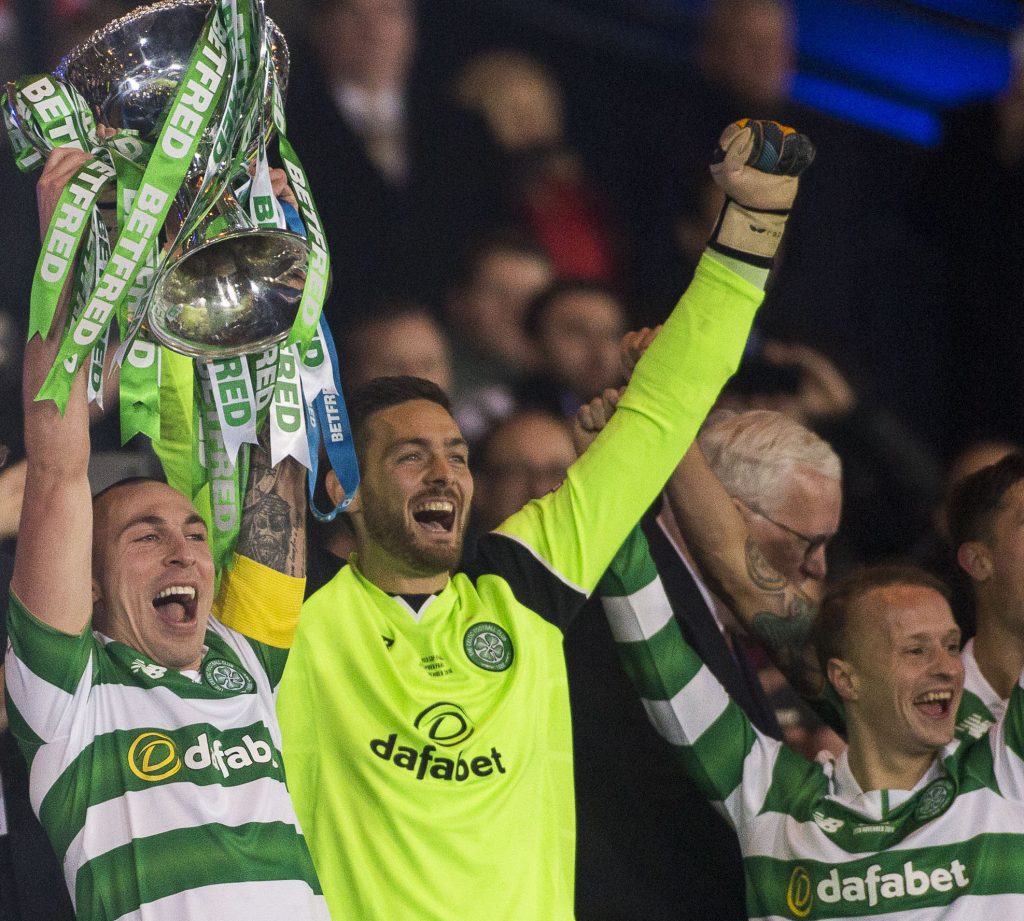 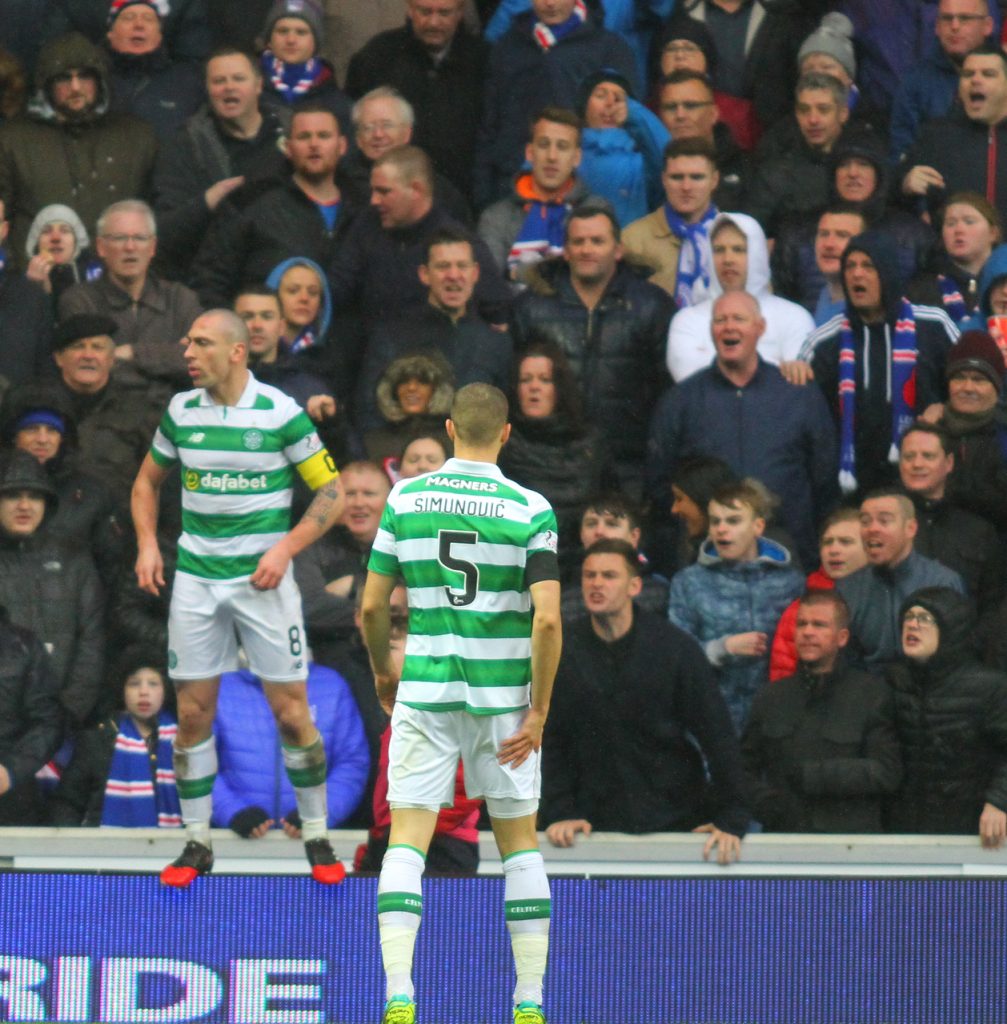 A BHOY ALONE…Scott Brown stands on the Ibrox trackside advertising as he gets up close and personal with the rival support. Jozo Simunovic keeps his distance. 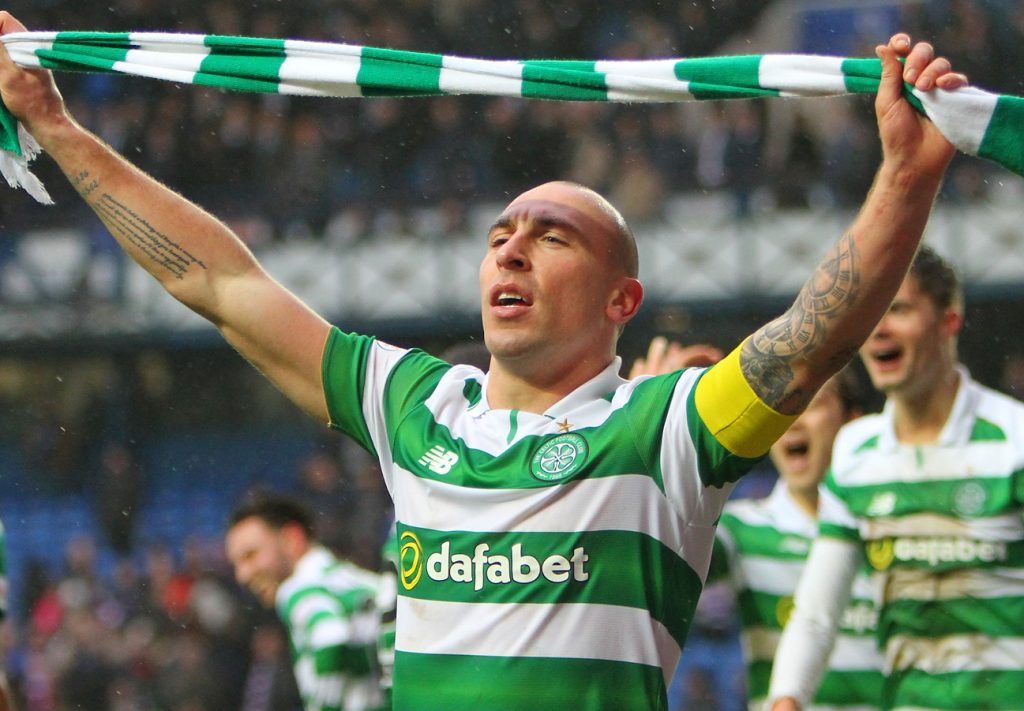 GOVAN GLORY…Scott Brown holds aloft the Celtic scarf after another win at Ibrox. 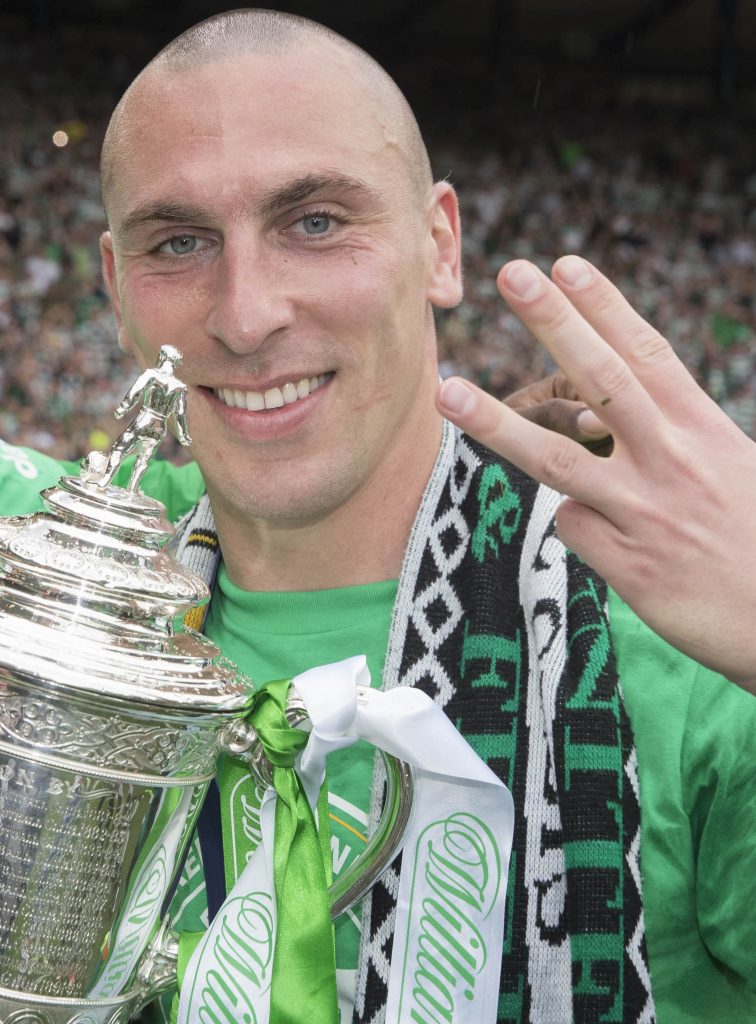 THE DOUBLE TREBLE…Scott Brown with the Scottish Cup following the 2-0 success over Motherwell in season 2017/18. 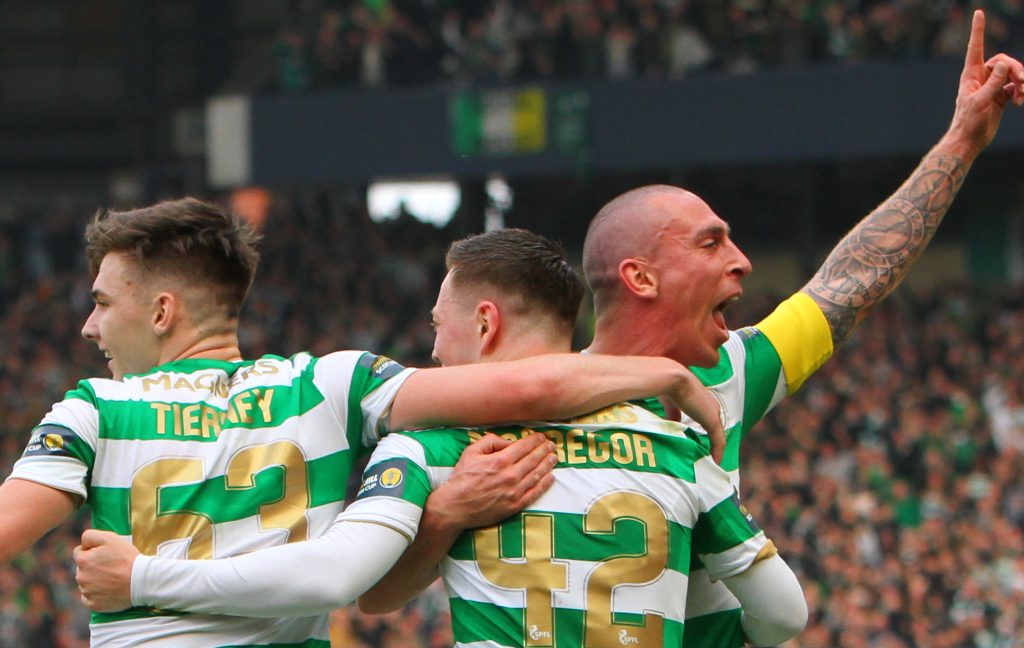 CHEERS…Brown shares the joy with the fans as Kieran Tierney and Callum McGregor celebrate. 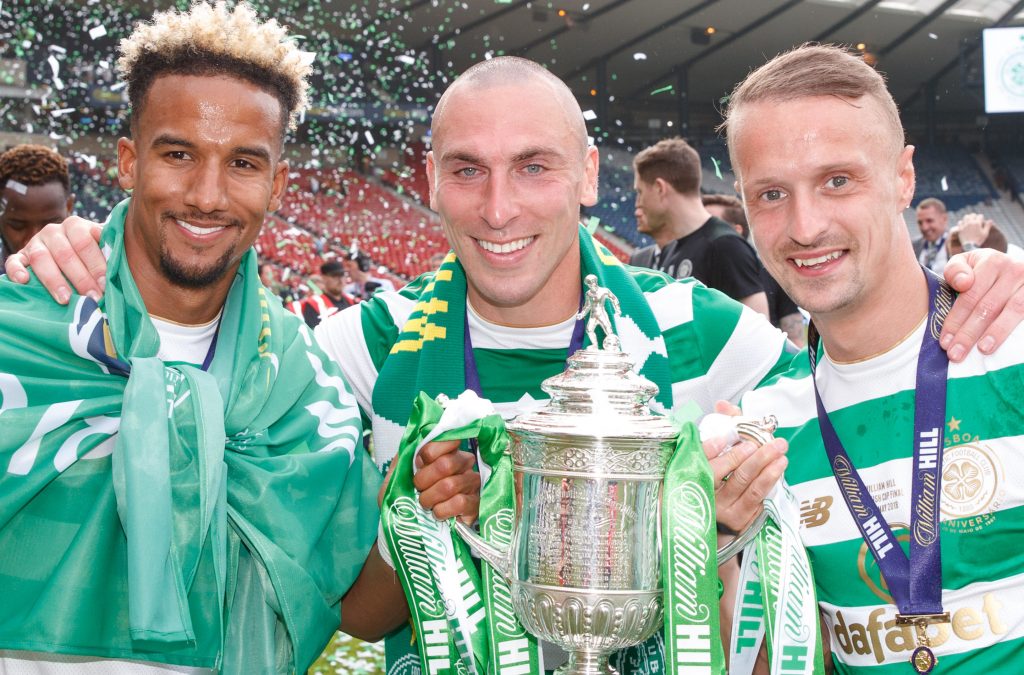 THE WINNING SMILES…Scottt Sinclair, Scott Brown and Leigh Griffiths with the gleaming prize. 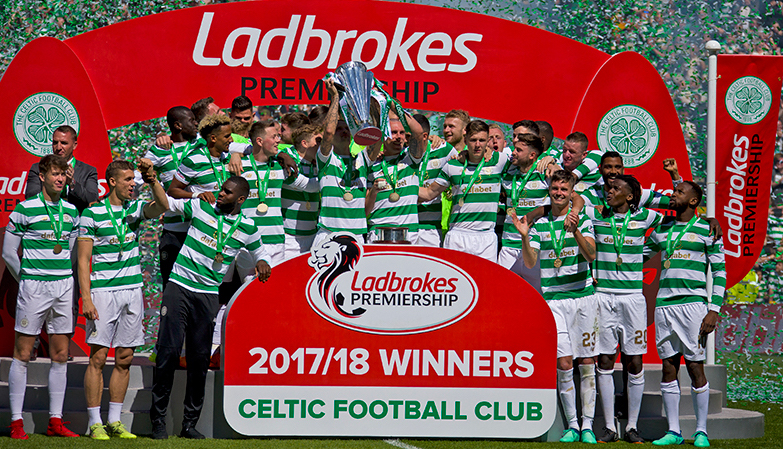 MAGNIFICENT SEVEN…Scott Brown leads the cheers as the Hoops celebrate seven-in-a-row at the end of season 2017/18. 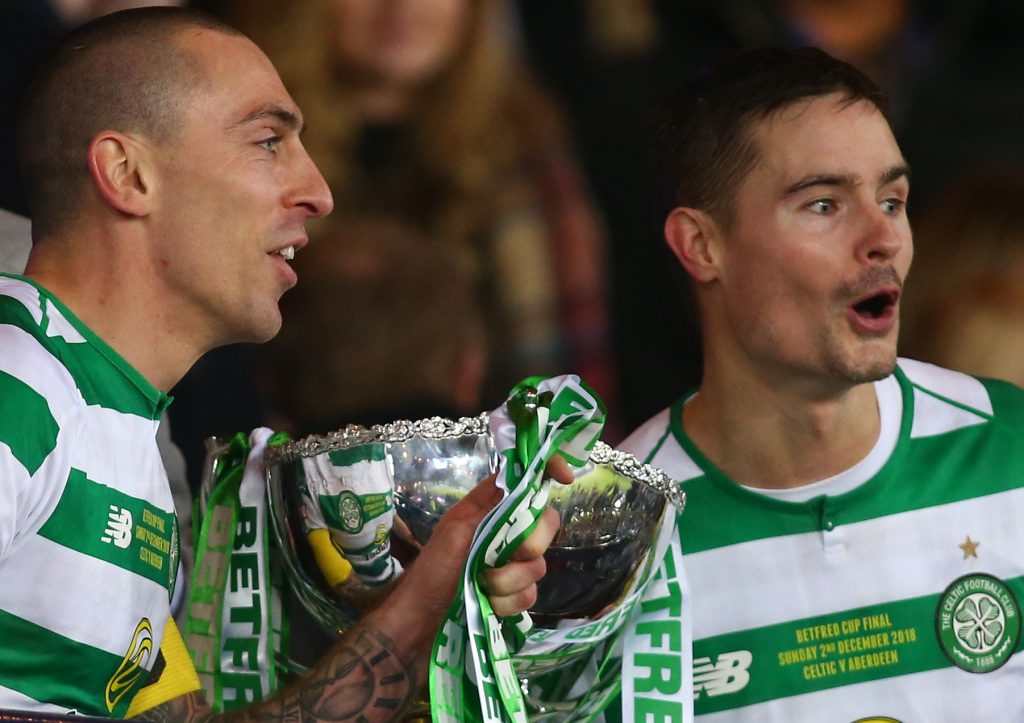 CHEER WE GO AGAIN…Scott Brown and Mikael Lustig with the League Cup which was won with a 1-0 success over Aberdeen. 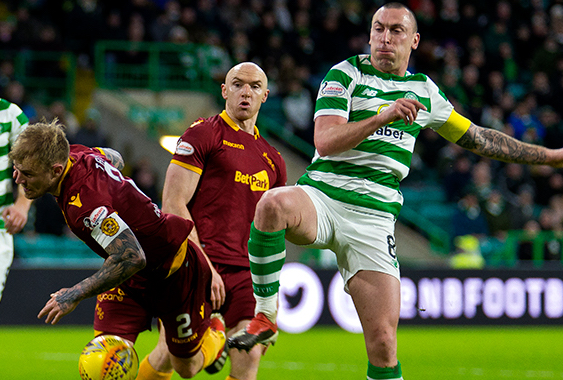 DIDN’T I DO WELL…Scott Brown in action against Motherwell on December 19 on the occasion he made his 500th appearance for the club. Celtic triumphed 3-0 for a player who always did things in style.