Celtic Quick News on News Now
You are at:Home»Exclusive Series»THE CAESAR CHRONICLES: BILLY IN THE SUN
By CQN Magazine on 28th May 2022 Exclusive Series

Over the next fortnight, CQN will publish a selection of the memories.

BILLY McNEILL was still a part-time player when, at the age of eighteen, he made his Celtic first-team debut appearance against Clyde in a League Cup-tie at Parkhead on Saturday, August 23 1958.

The future legend had worked for the Lanarkshire County Council and then Stenhouse Insurance, a company based in Glasgow city centre, in his first three years at the club after joining from Junior side Blantyre Vics in 1957.

McNeill didn’t expect his rapid rise to promotion, but Celtic manager Jimmy McGrory didn’t have too many options at the time when club stalwart Bobby Evans, an experienced Scotland international of some repute, called off and his replacement, John Jack, a reliable, if unspectacular, back-up, was injured.

And, so, in front of a crowd of 39,000 supporters on a bright afternoon in the east end of Glasgow, Billy McNeill trotted out behind skipper Bertie Peacock, the Northern Ireland left-half, and goalkeeper Frank Haffey, who was making only his second appearance after his initial outing in a 4–1 win over Third Lanark at the end of the previous campaign.

Bertie Auld, who accompanied McNeill out of the Celtic Park tunnel to be cheered onto the park that day, has hazy recollections of Celtic’s 2–0 triumph. 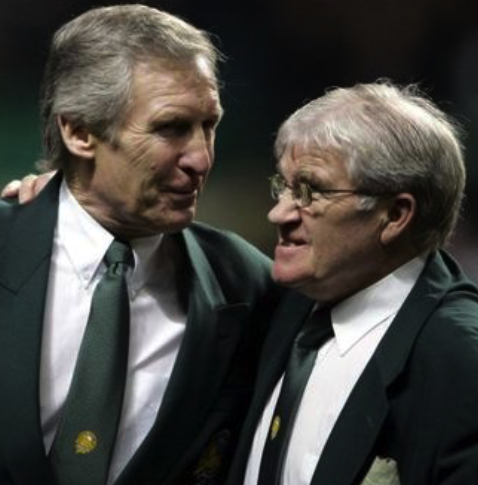 BEST OF PALS…the friendship between Bertie Auld and Billy McNeill endured the decades.

“Clyde had a good team in the fifties with individuals such as Harry Haddock, Tommy Ring and Archie Robertson in the line-up,” he recalled.

“We knew we would have to scrap to get anything from them – and so it proved. Going into the match, I was aware Clyde could go top of our section if they beat us. We were sitting on five points after three games – remember, it was two points for a win and one for a draw – and they were one behind.

“We were holders of the trophy, of course, following our win over Rangers in the Final the previous year. The fans were still singing, ‘Oh, Hampden in the sun, Celtic 7, Rangers 1’ at all our games. The manager, Jimmy McGrory, must have had a lot of faith in Billy at that age to bring him in.

“Naturally, I took the pressure off him with the second goal. I started off looking after Big Billy and it was something I got used to in all our years as team-mates!

“Seriously, I think Billy eased into the first team that afternoon. Even a blind man would have recognised his ability in the air. Bobby Evans, who played a lot of games at wing-half, was not tall for a centre-half and did most of his good work on the ground.

“So, it was a real change to see someone in our defence so dominant at dealing with crosses. It seemed prophetic we had a clean sheet in his first game.”

In those days, there was often a stampede for the newsstands or the vendors on street corners an hour or so after a game to catch up with the match reports and results around the UK. The main newspaper rivals were the pink Evening Times and the green Evening Citizen.

Under the headline ‘CLYDE DRIFT ON AS CELTS SCORE’, here is the full report from the Glasgow Times. Please note the misspelling of McNeill. The man at the match afforded him only one ‘l’. Such is fame. 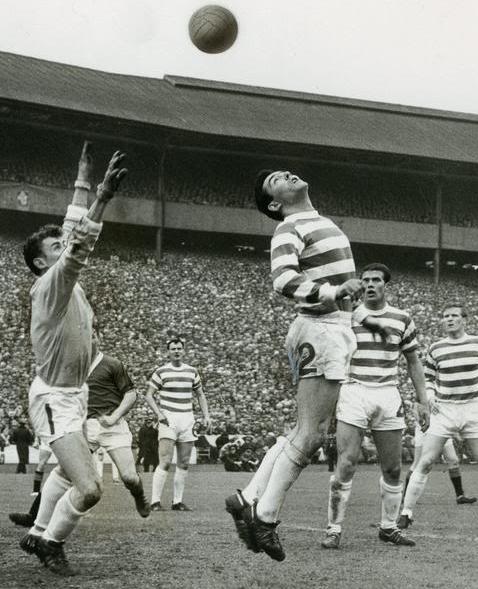 HEAD’S UP…Billy McNeill looks on (right) as team-mate Dunky McKay deflects a Rangers shot over the bar with keeper Frank Haffey covering at a packed Hampden Park during the 1-1 draw in the 1961 Scottish Cup Final. Billy Price (No.6) and John McNamee take in the action.

“BRIGHT sunshine and a new-look Celtic with teenagers Frank Haffey in goal, Billy McNeil at centre-half and Jim Conway at centre-forward brought the crowd in good numbers to Parkhead for the League Cup game against unchanged Clyde.

“Both teams opened up at full throttle and all within the first three minutes a like number of commendable efforts from Conway, Ring and Coyle had slid just past with McCulloch and Haffey mighty pleased young men.

“Then came three minutes of Clyde disaster. Conway’s persistence forced a corner. Tully’s cross drifted over and Sammy Wilson headed Celtic into the lead with a clean-as-a-whistle effort.

“Three minutes later came further disaster for McCulloch, who was led off with a cut face and Haddock took over in goal. Just to complete Clyde’s misery, Archie Robertson shot tamely past from the penalty spot two minutes later after Tully had pushed Coyle off the ball.

“To a cheer from the Clyde supporters, McCulloch resumed after a ten-minute quick repair job, with a plaster on his forehead. He was hardly back in goal before Conway waded past Finlay and Walters before placing the ball past from six yards.

“Clyde celebrated with a neat attack which fizzled to a bad end when Robertson shot tamely at Haffey from open-sight range. Clyde were improving with every delightful football minute and Ring hurtled a right-foot shot inches past. The Clyde onslaught continued with a Herd shot which Haffey did well to clutch. The young keeper brought out every stop again thirty seconds later to fingertip a Ring volley to safety.

“Such activity stung Celtic back into attack with Tully the maestro conducting the sweet rhythm of their all-in-a-line movements. Collins and Peacock almost knocked two Clyde defenders right of the park with piledrivers before Clyde’s red shirts went charging back to bring danger to Haffey.

“In the thirty fifth minute, Celtic were in green and white paradise as Auld scored a magnificent second goal. Wilson gave him the ball in the clear and from twenty yards it hardly rose a foot as it flew past McCulloch, who had no chance.

“Celtic’s new-look team were certainly playing with spirit and excellent understanding against a Clyde team who, although neat enough in outfield, sadly lacked a killer’s touch near goal.

“Clyde resumed, still playing their precise football, in contrast to Celtic, who were moving the ball around in a much more purposeful manner.

“Herd finally showed what was wanted with a fierce drive which slid inches over. Then Tully danced Clyde into trouble again with a balletic effort in which he gave Conway a perfect pass, but McCulloch brought off a fine clearance from the centre’s cross. Celtic were playing with all the confidence in the Parkhead world, with young McNeil a steady pivot.

“The pace was now slowing down with Clyde continuing to pattern-weave the ball into Celtic’s goal area before undoing all their good work by ineffective finishing.

“In contrast, Celtic were still a hard-hitting team with Tully and Collins a good wing, and Conway an ‘up-and-at-em’ centre giving Finlay a busy afternoon’s chasing.”

And with that report, a legend was born. Even if his name was spelled incorrectly.

* DON’T miss our EXCLUSIVE CAESAR CHRONICLES as Billy McNeill’s team-mates and rivals pay homage to a genuine Celtic legend – every day in your champion CQN.