Author Alex Gordon, who has had fifteen Celtic books published, including ‘Caesar and The Assassin’ and ‘Lisbon Lions: The 40th Anniversary Celebration’, interviewed many of the club legend’s team-mates and opponents for his tribute tome, ‘In Praise of Caesar’, which was published in 2018.

Over the next week or so, CQN will publish a selection of edited memories. Today John Fallon has his say.

THE telephone call left me a little mystified.

“Billy McNeill wants to see you at the park,” was the simple message from my old team-mate John Clark. As usual, there was no preamble from the quiet man of the Lisbon Lions team.

“I’ll let Billy fill you in with the details when you catch up,” came the even more puzzling reply.

Intrigued, I made arrangements to see my old captain the following day after training at Barrowfield. Billy had just returned as manager of the club in May 1978 and, as you would expect, had plenty on his plate to contend with, but he had taken the time to ask his assistant boss to get in touch with me.

The call came right out of the blue and I spent most of the previous evening wondering why the new Celtic team boss wanted to have a chat with me. Somehow, I didn’t think he would be asking me to look out my old goalkeeper’s gloves. So, in a bit of a quandary, I made my way to Celtic Park to get my answer.

Billy was waiting to greet me and he ushered me into his manager’s office. He went behind his desk and told me to pull up a chair. He was his usual charming self, the perfect gentleman. As a centre-half, playing directly in front of me, we had the odd disagreement, but nothing too serious to affect our friendship.

He smiled at me, that big, bright grin that could light up a room, and said: “I hear you don’t get in the front door here any more. Is that the case?” 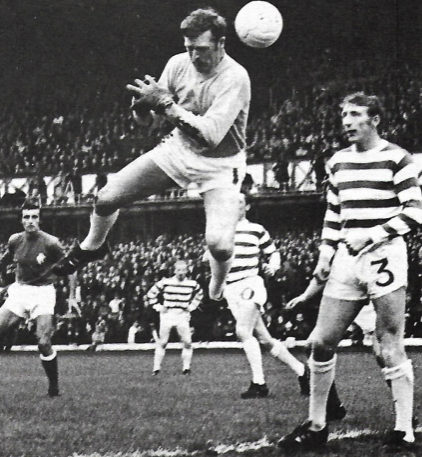 HIGH JINKS…keeper John Fallon comes for a high ball at Ibrox with Tommy Gemmell in attendance.

Sadly, I had to tell my old skipper he had heard quite correctly. There was no welcome and certainly no admission at Parkhead for someone who had been on Celtic’s books for just over twelve years, having signed from Junior outfit Fauldhouse United on December 11 1958. That door was firmly closed behind me when I left the club to join Motherwell in February 1972.

No-one told me I had been barred. As usual, I went up to the entrance for the second leg of the European Cup semi-final against Inter Milan – the night Dixie Deans missed a penalty-kick in the shoot-out decider. The doorman stopped and told me I wasn’t getting in. He told me he was acting on orders.

Whose orders? I had no doubt where they had come from – Big Jock.

“I still watch the games, though,” I told Billy. “I pay in at the turnstiles. I’m a Celtic fan and I’ll always support my team.”

Jock Stein’s successor looked at me, laughed and pushed a ticket and a pass across his desk top.

“There you are, my friend. Welcome back. That’ll get you back in the front door.”

The little pieces of cardboard, that got me into the stand behind the directors’ box, were most welcome and the gesture was a typical act of kindness by a fine human being.