Over the next fortnight, CQN will publish a selection of edited memories. Today Murdo MacLeod has his say.

BILLY McNEILL possessed a wonderfully wicked sense of humour and he demonstrated it one afternoon at Ibrox.

It was September 19 1981 and we had just beaten Rangers 2–0 in a league game. Tom McAdam had given us an early lead with a trademark header and I netted the second with a low shot following a free-kick with four minutes to go.

In truth, we should have won a lot more comfortably as we had control of the encounter straight from the kick-off.

As we celebrated in the dressing room, Big Billy said to me, ‘Right, Murdo, hurry up and get changed. Let’s go upstairs and see Deedle Dawdle – the nickname for Rangers director Willie Waddell – and tell him he’s got a lovely new stand.’

Rangers had just spent £4million, a lot of money back then, on refurbishing the stadium and a lot of the credit went to Waddell, who had been a player, manager, general manager, vice-chairman and director at the club. 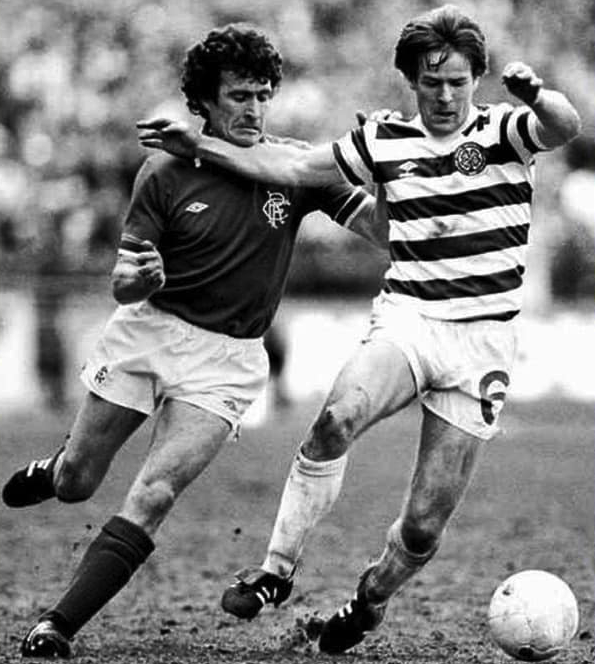 DERBY DUEL…Murdo MacLeod and Rangers’ Sandy Jardine in a battle for possession.

The Rangers hierarchy had deliberately held back the unveiling of the stadium for the visit of their greatest foes. They had already played a few league and League Cup-ties on their home turf, but they wanted a gala occasion in front of a sell-out Old Firm crowd.

The sun was shining in Govan that day, the brand spanking new stadium gleamed, the fans turned up in their thousands and all they needed was the right result.

Celtic, though, were in no mood to be bit-part players in the Ibrox theatre. Billy McNeill made sure of that. We won by two goals, but we could have claimed four or five.

So, the Celtic manager was in fine fettle afterwards, but he couldn’t help himself when it came to rattling Deedle’s cage. Maybe there was history between the pair, I don’t know.

What I was aware of, though, was that the Rangers man was an acquired taste for many of his contemporaries. He would have been fizzing, having just watched his team be completely outplayed and beaten by Celtic.

Billy just had to rub it in.