Celtic Quick News on News Now
You are at:Home»Latest News»THE DIFFERENCE BETWEEN KT AND CAESAR
By CQN Magazine on 1st April 2020 Latest News

KIERAN TIERNEY was asked if he could follow in the footsteps of loyal one-club men such as Billy McNeill and Paul McStay and answered: “Yeah, there is every chance – I hope.”

It was November 2017 and the left-back had just penned a new six-year deal with Celtic and he made it clear he would be more than satisfied to stay at the club for life.

“I’ve been here 15 years already and it’s a long time,” he said. “We’ll see what happens. I am in no rush to leave, everybody can see that from signing a long-term deal.”

Tierney, who had committed himself to the Hoops to 2023, at least, at the age of 19, added: “I had no doubts about signing a long-term deal. I wish it was longer. It’s brilliant for me and my family. I’m buzzing. It’s a great feeling.”

Yet, this is the same Tierney who vamoosed out of Parkhead last summer when Arsenal came calling and the champions accepted an offer of £25million, a record fee for a Scottish club.

No, it’s not an April Fool’s Day joke. It is the way of the world and Celtic fans have learned to live with the model that has seen the likes of Virgil van Dijk, Fraser Forster, Victor Wanyama and Stuart Armstrong cross the border in big-money deals in recent times.

Odsonne Edouard is the next to be coveted by clubs, who, by a quirk of geography, can enjoy enormous injections of satellite TV cash that is the envy of most of Europe.

But what about the players who were not tempted to leave the Hoops, greats such as legendary skipper McNeill and the impeccable McStay?

Author Alex Gordon, who wrote the Billy McNeill tribute book, ‘In Praise of Caesar’, was close to both Hoops icons over the years and he recalled: “Back in the early sixties, Billy was linked with a lot of English clubs. They didn’t have the telly cash back then, but they did possess more readily-available finances.

“Paddy Crerand, who never wanted to leave Celtic, was sold to Manchester United for a record fee of £43,000 in 1963 and it seemed more than likely Billy would join him at Old Trafford.

“Billy was also very friendly with Denis Law and I know the United idol filled his mate’s head with all sorts of tales of the riches that could be had playing in England.

“It must have been difficult for Billy to resist temptation. Celtic were a selling club and they would have accepted a big cheque for their skipper, make no mistake about that.

“Billy, though, seemed to sense better times were around the corner and he wanted to play his part.

“Spurs came in for him, I know that to be a fact. They were the best team in England at the time and had a strong Scottish backbone with the likes of Dave Mackay skippering the team and they also had the Scotland international goalkeeper Bill Brown in the team.

“Their manager, Bill Nicholson, was looking for a new centre-half. He knew he needed a replacement for England international Maurice Norman who was nearing the end of a wonderful career. 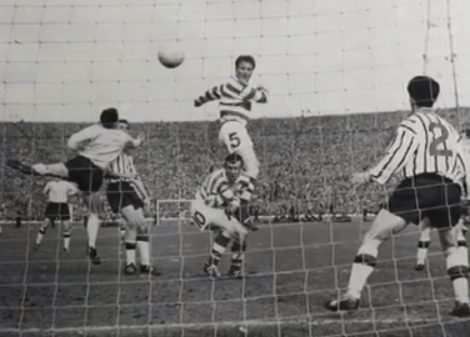 THE START OF SOMETHING GOOD…Billy McNeill rises high to bullet in the 1965 Scottish Cup winner against Dunfermline.

“Billy was the man he wanted. A journalist friend of mine, Jim Rodger, who was then at the Daily Express, was known as ‘Scoop’ to the players. In fact, he was a bit of a Mr Fixit for the top teams.

“He got involved in all sorts of transfers and was a go-between in so many deals such as Denis Law from Torino to United, Alan Gilzean from Dundee to Spurs, Ian Ure from the Dens Park club to Arsenal and he had a hand in the Paddy Crerand move to Old Trafford, too.

“Jim Rodger, known in the trade as ‘Jolly’ – who said newspapermen didn’t have a sense of humour? – was very friendly with Matt Busby, the United manager. Jim had been a miner before going into journalism and that was something he shared with Busby and Big Jock Stein and Liverpool gaffer Bill Shankly.

“They were all working-class guys and the managers put a lot of trust in Jim. He never betrayed a confidential conversation.

“He was a handy man to have around, as well. Obviously, it was illegal to contact a player from another team who was under contract to see if he was interested in switching sides. It was known as tapping and if a club was found guilty it could bring about a whole raft of punishments from the respective associations.

“However, there was nothing to stop a journalist, Jim Rodger, for instance, dropping in a word in the ear of a player during an interview or a conversation. Goodness knows how many players Jim got in touch with on behalf of so many clubs. That secret went with him to his grave.

“But he did contact Billy about Spurs. This was before Jock Stein went back to Celtic in March 1965 after his managerial stints at Dunfermline and Hibs. I doubt if Jim would have ever crossed Big Jock.

“Billy was told how much he could earn at Spurs and, needless to say, it was a whole lot more than was on offer at Celtic. In 1963, he had just got married to Liz and a young family was on the way. The easy thing would have been to say to Celtic ‘thanks for the memories’ and taken the money and run.

PARADISE…Billy McNeill returns to Celtic as manager in May 1987.

“It is to his eternal credit, he was prepared to tough it out The bigger wages, a different lifestyle and the bright lights of London didn’t appeal to Billy as much as playing for his true love, Celtic.

“Billy was absolutely delighted with the news Big Jock was coming back. He often confessed he had given serious thought about being forced to leave Celtic. Quite apart from the financial inducements elsewhere, Billy was ambitious to win trophies during his career.

“He came into the Celtic first team in August 1958 and had won nothing until Jock came back and, ironically, he headed in the winner to beat Dunfermline in the Scottish Cup Final in April 1965.

“That changed everything for Billy. Celtic were winning, he was happy and dynamite wouldn’t have shifted him from Celtic Park.”

TOMORROW: The inside story: Why Paul McStay remained loyal to Celtic.