Celtic Quick News on News Now
You are at:Home»Latest News»THE EIGHT WONDERS: HOW THE LEAGUES WERE WON
By CQN Magazine on 5th May 2019 Latest News

CELTIC have clinched four of their eight successive championships on their travels.

The Hoops, celebrating their FIFTIETH crown, added Pittodrie to Rugby Park, Firhill and Tynecastle as an away day success as they stack up the flags.

Here is the sequence of title-winning games during the champions’ eightsome reel. 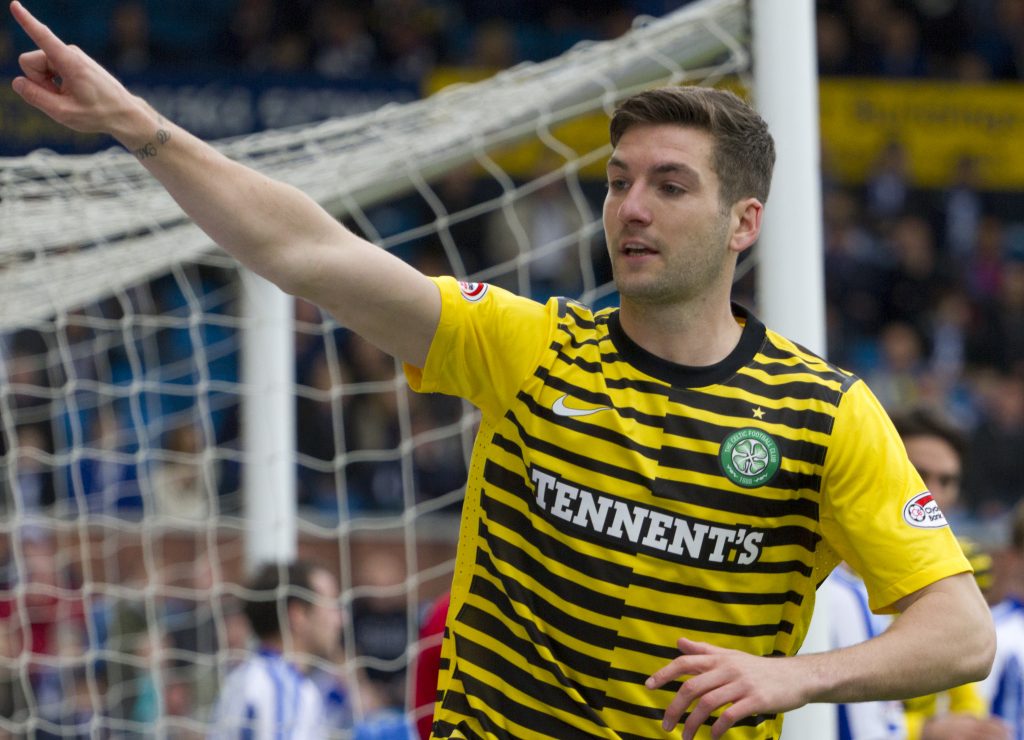 NUMBER ONE…Charlie Mulgrew accepts the plaudits after one of his two goals at Rugby Park.

CELTIC kicked off the surge to eight successive titles with current interim boss Neil Lennon in charge as they ran amok at Rugby Park.

Nine-man Hoops, who had Cha Du-Ri and Victor Wanyama red-carded, had been denied a title party at Ibrox a fortnight earlier when they suffered a 3-2 defeat against Ally McCoist’s side.

But there was no mistakes at Rugby Park as Charlie Mulgrew scored twice and set up goals for Glenn Loovens and Gary Hooper before half-time.

Late strikes from Joe Ledley and Hooper again rounded off a day of celebration as the Parkhead outfit lifted the title for the first time since 2008. 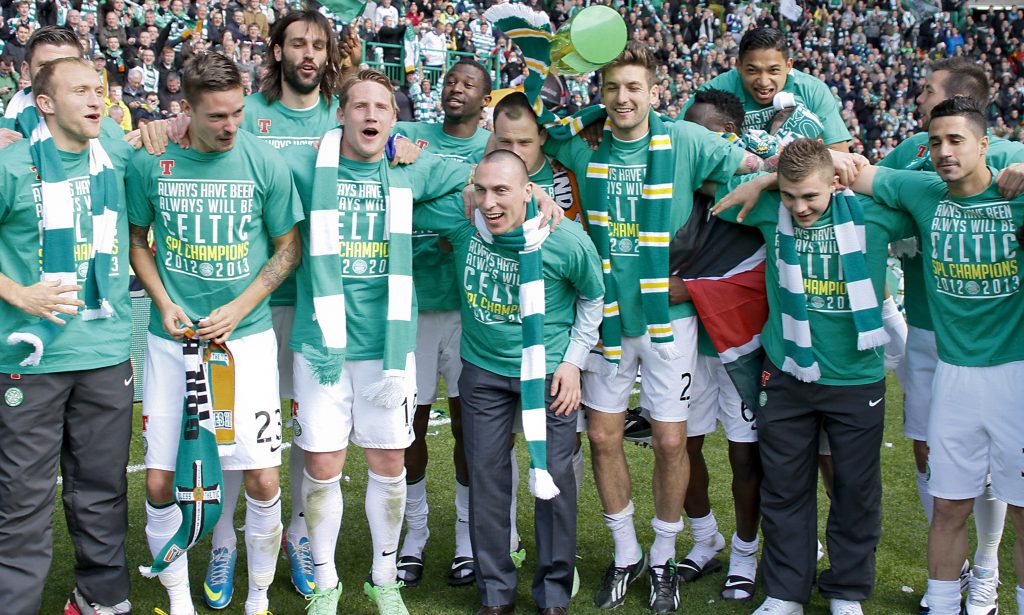 NUMBER TWO…scarf aces after their emphatic victory over Caley Thistle.

NEIL LENNON led the Hoops to a second successive crown with a solid 4-1 win over the Highlanders at Parkhead.

The holders went into the contest only needing a point, but, following a dull opening period, they sparked to life when Gary Hooper rifled in a double after the hour mark and stand-in skipper Joe Ledley added another.

Substitute Georgios Samaras completed the scoring with a superb solo effort in the 88th minute with Aaron Doran netting a consolation strike for the visitors in stoppage time. 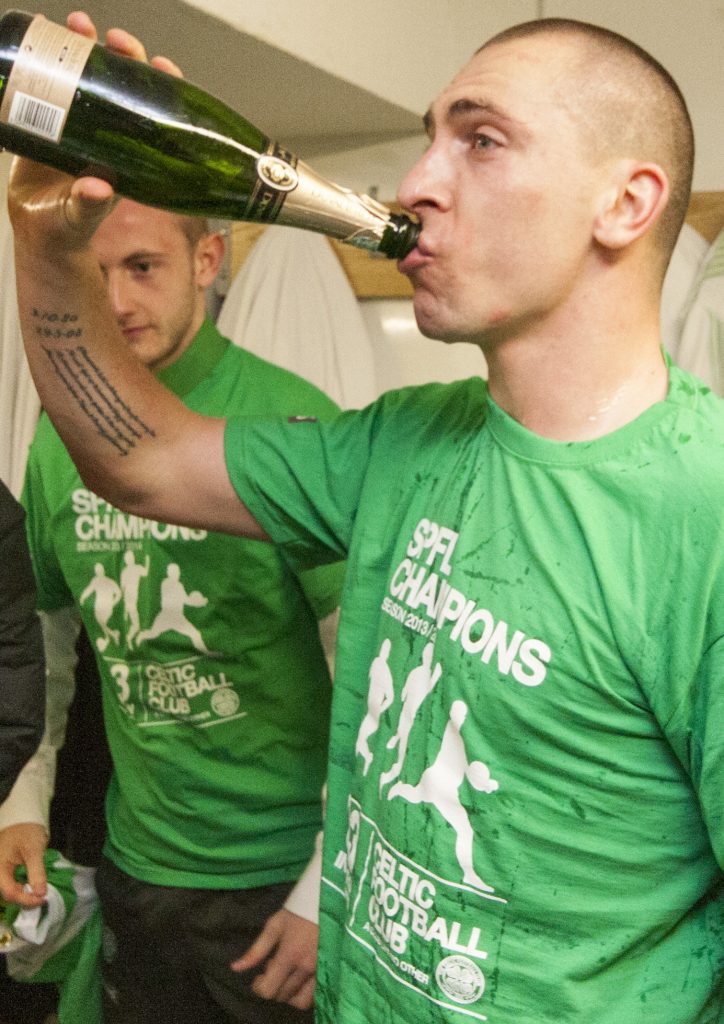 NUMBER THREE…Scott Brown celebrates with a bottle of bubbly after the win at Firhill.

CELTIC completed the hat-trick with a runaway success over the Jags at Firhill.

An early header from Anthony Stokes got the ball rolling before teenage substitute Liam Henderson got his first goal for the club four minutes after the turnaround.

Norwegian midfielder Stefan Johansen added a third and the Hoops responded to losing an 85th-minute goal to Christie Elliott by scoring another two through Stokes and Kris Commons. 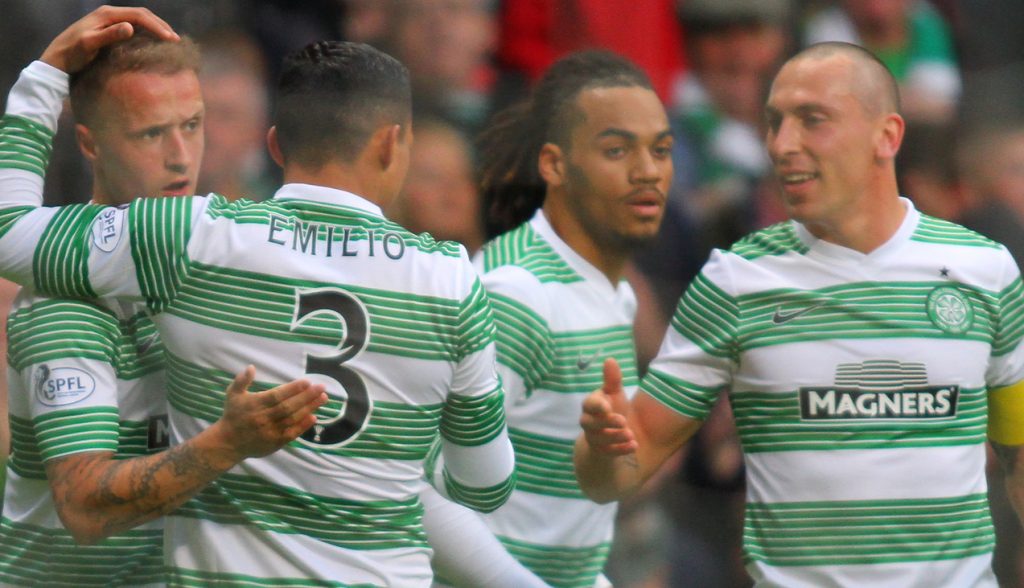 NUMBER FOUR…Leigh Griffiths is congratulated by Emilio Izaguirre, Jason Denayer and Scott Brown after his strike.

The Norwegian had replaced Neil Lennon in the summer and lifted the silverware at the first time of asking. The Dens Park visitors, with current Hoops No.1 Scott Bain in goal, had no answer to a pulverising Friday night performance from the title kings.

The following afternoon, closest challengers Aberdeen lost 1-0 to Dundee United at Tannadice which left the Celts 11 points clear with three games to play. The title was in the bag. 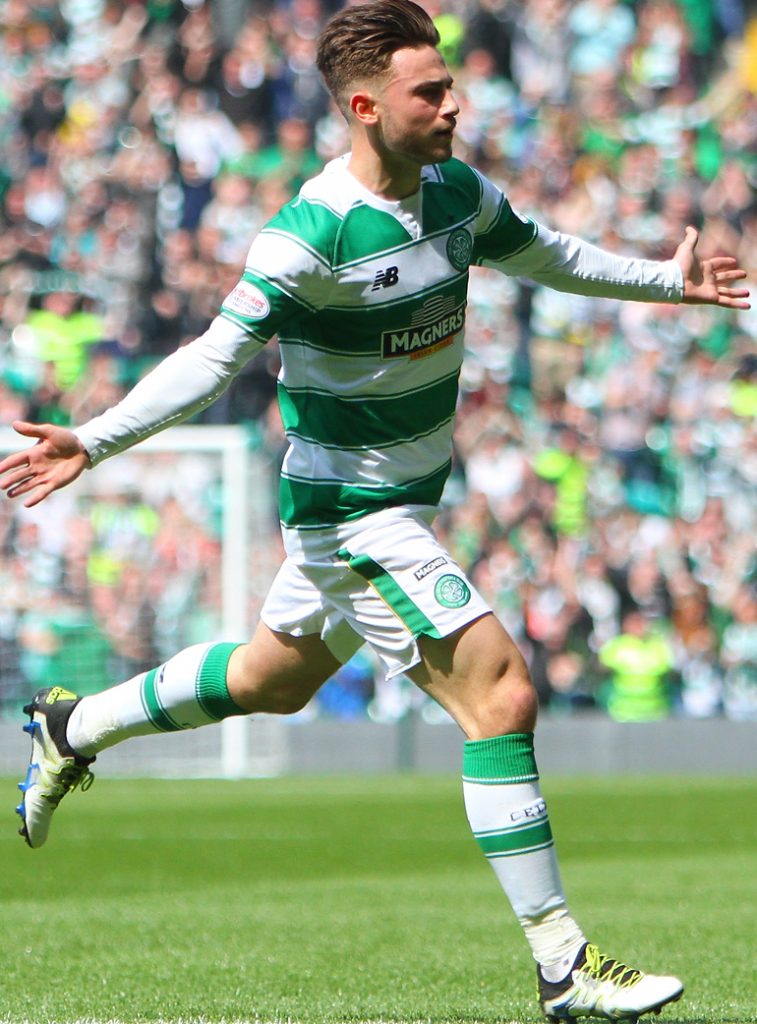 NUMBER FIVE…Patrick Roberts shares the joy after one of his two goals against the Dons.

THE champions survived a spirited second-half fightback from the Dons at Parkhead before clinching their fifth flag in a row.

The Hoops had a nine-point  and 35-goal advantage over the Pittodrie visitors heading into the first of their final three games.

Patrick Roberts, on loan from Manchester City, scored with two excellent first-half strikes before right-back Mikael Lustig added a third just after the break. Their opponents rallied with goals from Niall McGinn and Andy Considine, but Ronny Deila’s side held on. 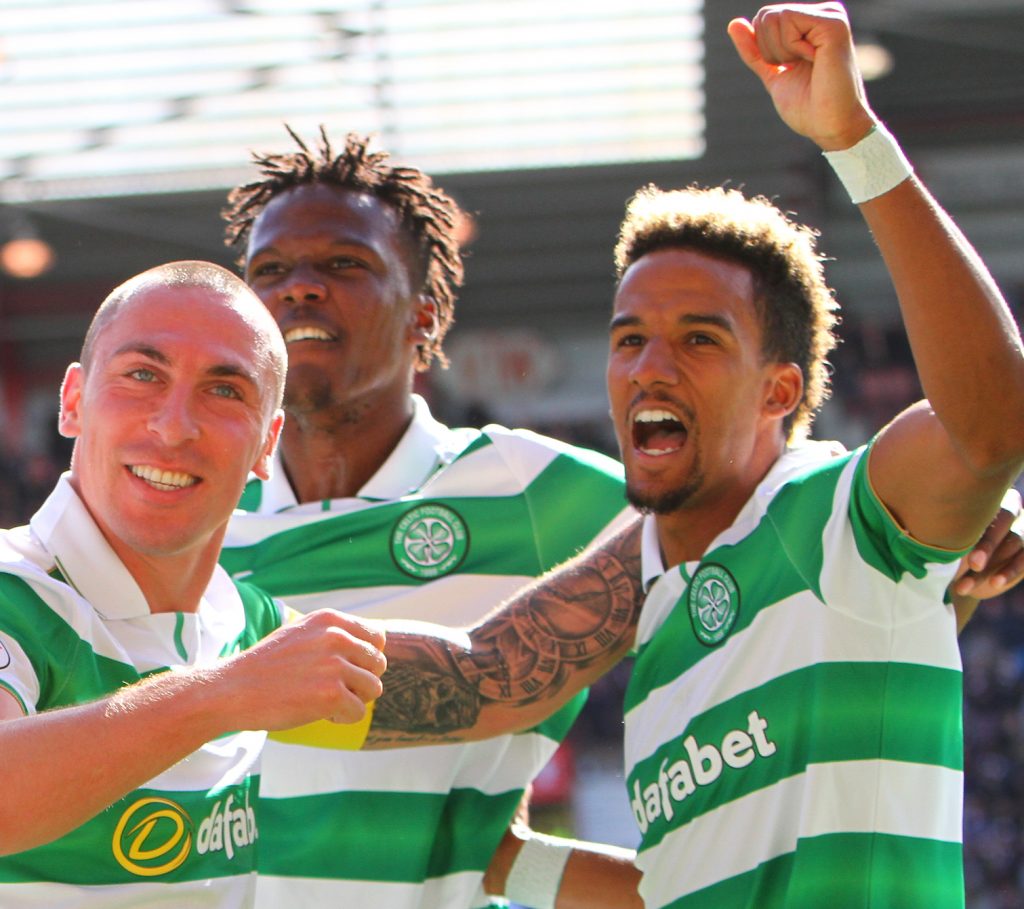 BRENDAN RODGERS sealed the club’s “Invincible” season in his debut campaign with a capital performance in Edinburgh.

A Scott Sinclair hat-trick piloted the team to title No.6 with two of his goals arriving in three first-half minutes.

Midfielder Stuart Armstrong added a third and Patrick Roberts scored a wonderful fourth before Sinclair notched his third from the spot with
seven minutes remaining. The Hoops went on to capture domestic treble without losing a game. 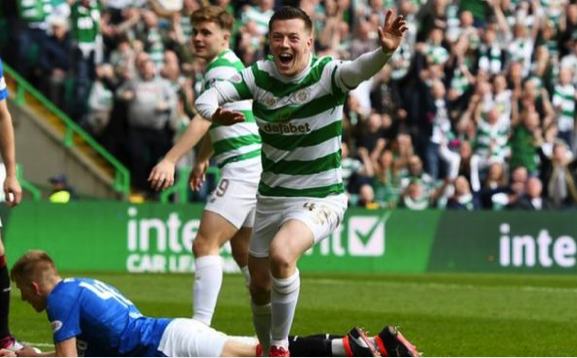 NUMBER SEVEN…Callum McGregor races away after scoring the fifth goal against the Ibrox side.

CELTIC clinched the Magnificent Seven in memorable fashion with a one-sided drubbing of the Ibrox side in the east end of Glasgow. 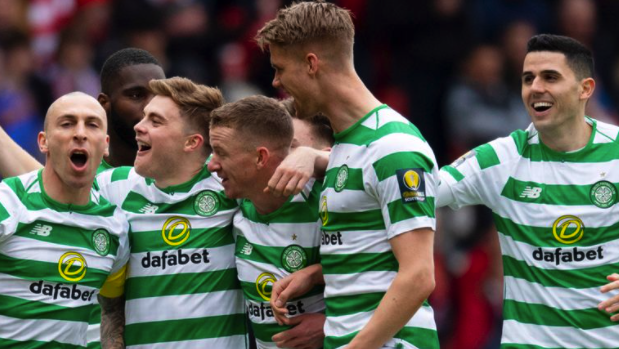 MIKAEL LUSTIG got the show on the road with a spectacular diving header to sizzle an effort beyond the helpless Joe Lewis five minutes before the interval at Pittodrie.

The Hoops took firm control following the turnaround and Jozo Simunovic, who had scored the winner against Kilmarnock the previous week, powered in a header from a left-wing corner-kick from Callum McGregor for the second goal in the 53rd minute.

The Dons, who had troubled Scott Bain on a couple of occasions in the opening 45 minutes, were swept aside and Tom Rogic raced 40 yards before setting up Odsonne Edouard for the third goal in the fading moments.

Neil Lennon, who had kick-started the silverware haul at Rugby Park in 2012, celebrated big-style with the fans.