THE importance of Josip Juranovic to Celtic was emphasised at Hampden yesterday.

The Croatian international right-back was a dejected figure when he was forced off with an injury in the Scottish Cup semi-final.

A 64th-minute goal from Greg Taylor had the Hoops 1-0 ahead before Juranovic had to be replaced by Anthony Ralston three minutes later.

Until then, the resolute and reliable defender had kept Ryan Kent quiet to blunt a threat in Giovanni van Bronckhorst’s line-up. Admittedly, Celtic had the opportunity to double their advantage in the 69th minute when Cameron Carter-Vickers walloped a close-range effort off the face of the crossbar following a right-wing corner-kick from Filipe Jota.

But the opposition were back in the game in the 78th minute with an equaliser from Scott Arfield. 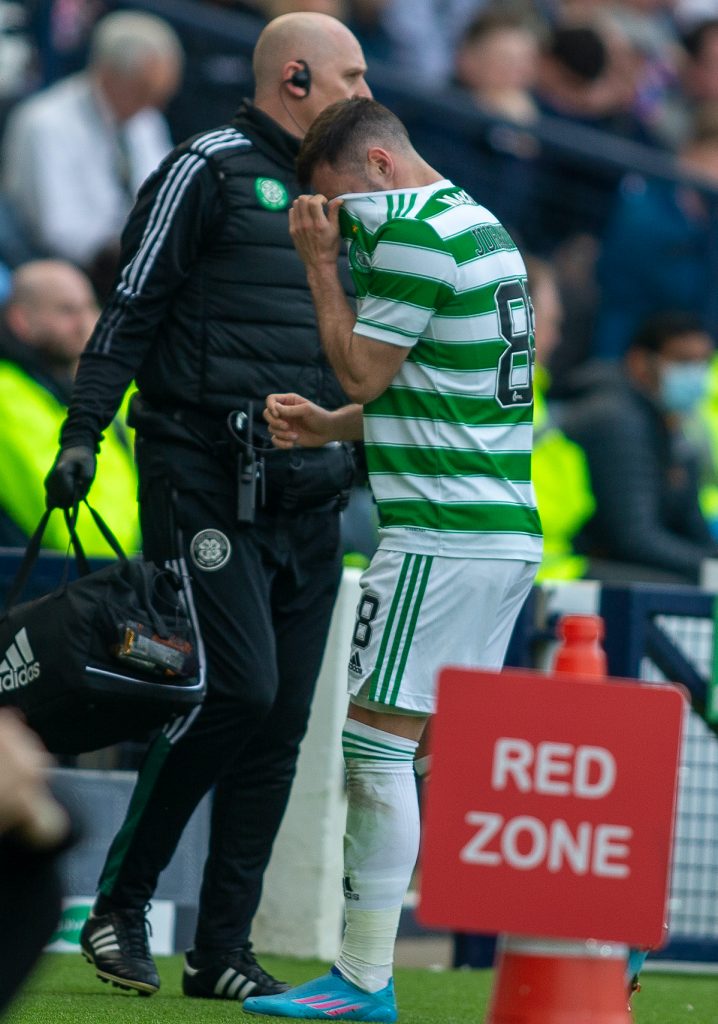 DEJECTED…Josip Juranovic is forced to leave the field with Celtic leading 1-0.

Kent was already giving Ralston problems with his raiding on the flank and the Scotland international switched to the left at the start of extra-time with Taylor limping off and Stephen Welsh coming on in the No.2 position.

The Hoops’ latest substitution gave the ball away with his first two passes and didn’t look comfortable in a wing-back slot after playing all this season at centre-half.

Kent and his team-mates sensed they could profit in the absence of Juranovic and had more joy on the left than they had in the previous hour and a half.

This is NOT a criticism of Welsh who was pitched into a high-tempo occasion and found difficulty in getting into his stride.

DEJECTED…Stephen Welsh and his Celtic team-mates at the end of extra-time.

Circumstances, unfortunately, necessitated the change and, while Juranovic was otherwise engaged, the Ibrox team took advantage. Calvin Bassey was allowed to run free on the left before delivering the ball that was turned behind Joe Hart by the unfortunate Carl Starfelt for the goal that settled the tie.

The entire dynamic of the game would have changed had the former Legia Warsaw back-four operator remained on the pitch and it’s anyone’s guess how events and the final score would have panned out.

One thing is abundantly certain, though, and that it is imperative Juranovic makes a full return to fitness in the crucial five-game run-in to the Premiership title.