SIX Celtic players have moved on since the last time the Hoops enjoyed a league victory over Steven Gerrard’s team.

Neil Lennon, of course, has also joined the exodus while THREE other players are currently on loan from the squad of 18 that was stripped for action at Ibrox on Sunday September 1 2019.

Goals from Odsonne Edouard just after the half-hour mark and substitute Jonny Hayes in the fading minutes ensured a 2-0 triumph for the champions who eased three points clear at the top of the Premiership table and ended the title pretenders’ 12-game unbeaten run since the start of the new campaign.

In the starting line-up that afternoon were keeper Fraser Forster and Hatem Abd Elhamed while Moritz Bauer and Hayes came off the bench. Craig Gordon and Lewis Morgan weren’t called into action.
In a quick change-around in only 18 months, the club has undergone a remarkable transformation. 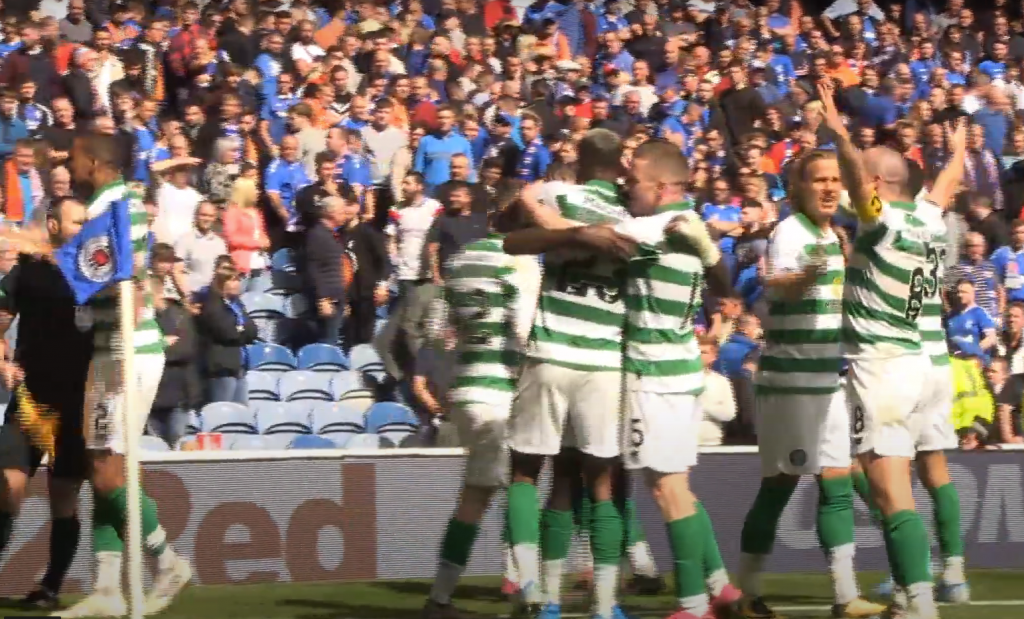 GOVAN GLEE…Scott Brown and the Celtic players celebrate after Jonny Hayes’ late strike.
Forster rejoined Southampton and Bauer did likewise with Stoke City after their loans expired last summer. Hayes left to return to Aberdeen when his contract was over and Gordon went back to Hearts after rejecting an extension.
Israel international right-back Elhamed returned to Hapoel Be’er Sheva in January and winger Morgan joined the David Beckham revolution at MLS outfit Inter Miami a few days after the Ibrox success.
Bolingoli played at left-back before his inexpicable action last summer with a secret trip to high-risk Spain and ignoring the the Covid-19 quarantine guidelines upon his return. He was shipped out to Turkish champions Istanbul Beseksehir on a season-long loan while Olivier Ntcham agreed to a temporary shift to Marseille while striker Vakoun Issouf Bayo moved to France at the start of the season to second tier Toulouse.
Skipper Scott Brown, Nir Bitton, Callum McGregor, James Forrest, Ryan Christie, Mikey Johnston, Leigh Griffiths, Edouard and the currently-injured Christopher Jullien are the survivors from that success a year-and-a-half ago. 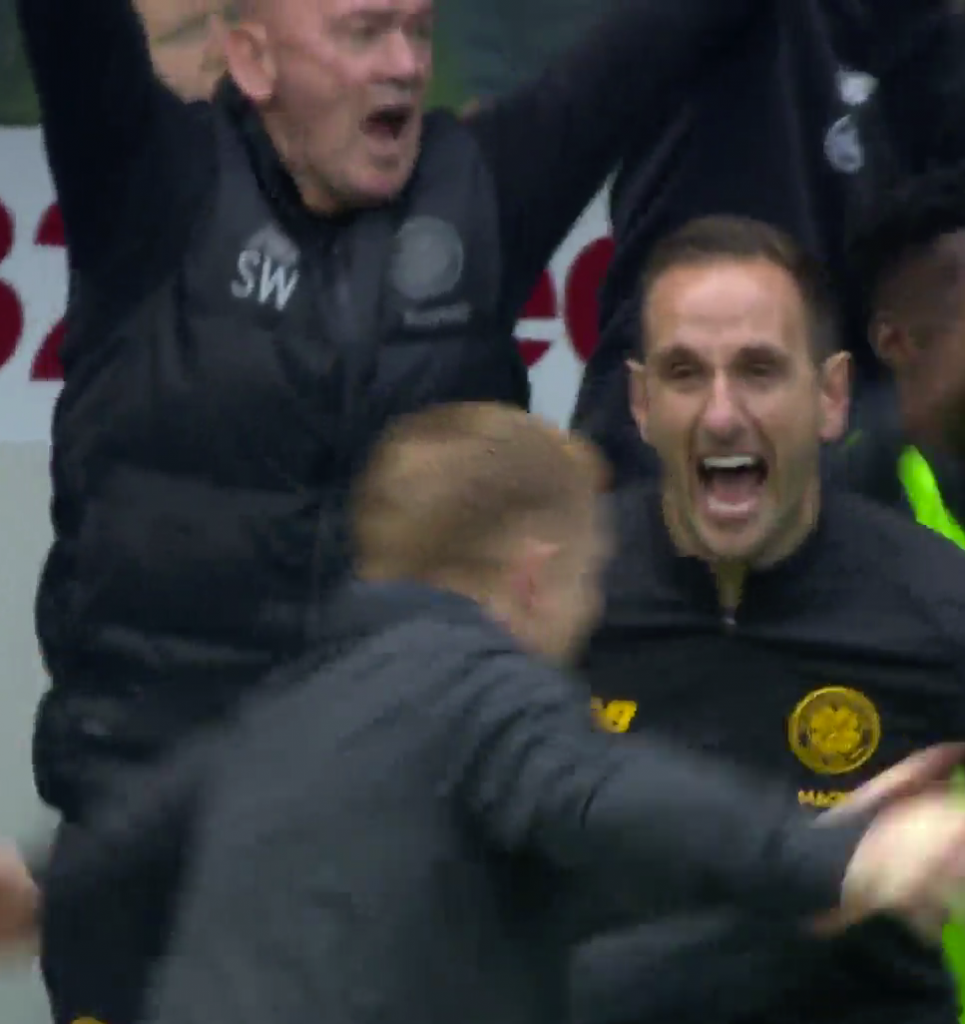 JOY BHOYS…Neil Lennon and John Kennedy show their delight as Celtic take the points at Ibrox in September 2019.
Since the win in Govan, Celtic lost 2-1 at Parkhead three months later, slipped again in a 2-0 flop in the east end of Glasgow in October this  season and completed a miserable and unwanted hat-trick in the 1-0 defeat at Ibrox on January 2.
Thankfully, it hasn’t all been doom and gloom and a goal from Jullien gave the Hooops the Betfred League Cup in December 2019 to continue the silverware domination on the club’s way to a phenomenal quadruple treble.
Here is the squad that was chosen for Ibrox that eventful day in September 2019.
Forster; Elhamed, Jullien, Bitton (sub: Bauer 66), Bolingoli; Brown, McGregor; Forrest (sub: Ntcham 66), Christie, Johnston (sub: Hayes 85); Edouard: Subs not used: Gordon, Griffiths, Bayo, Morgan. 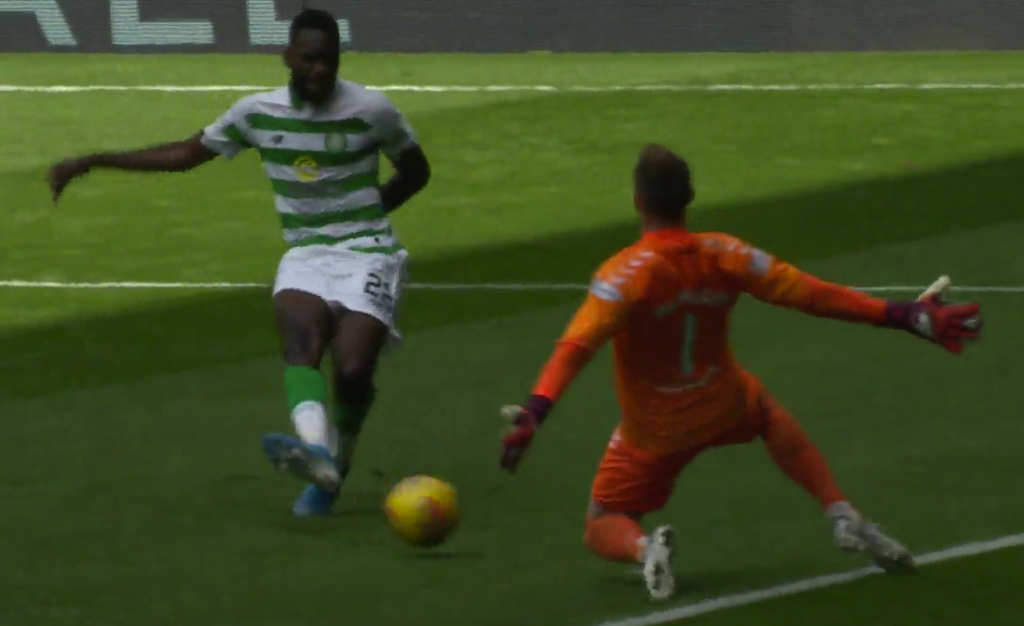 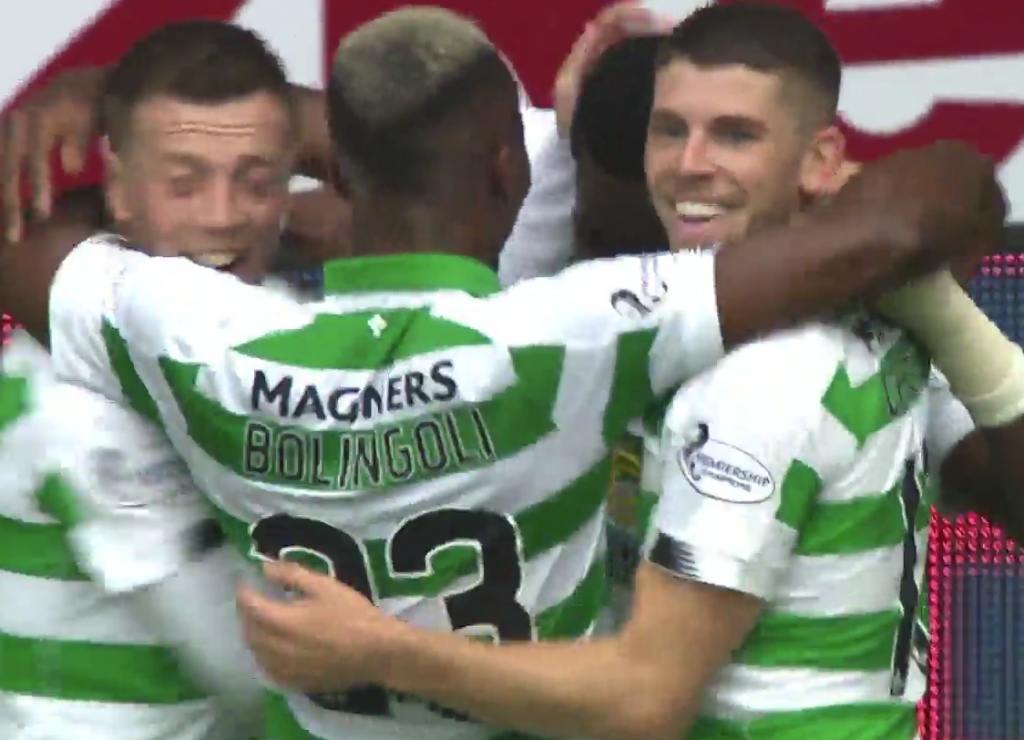 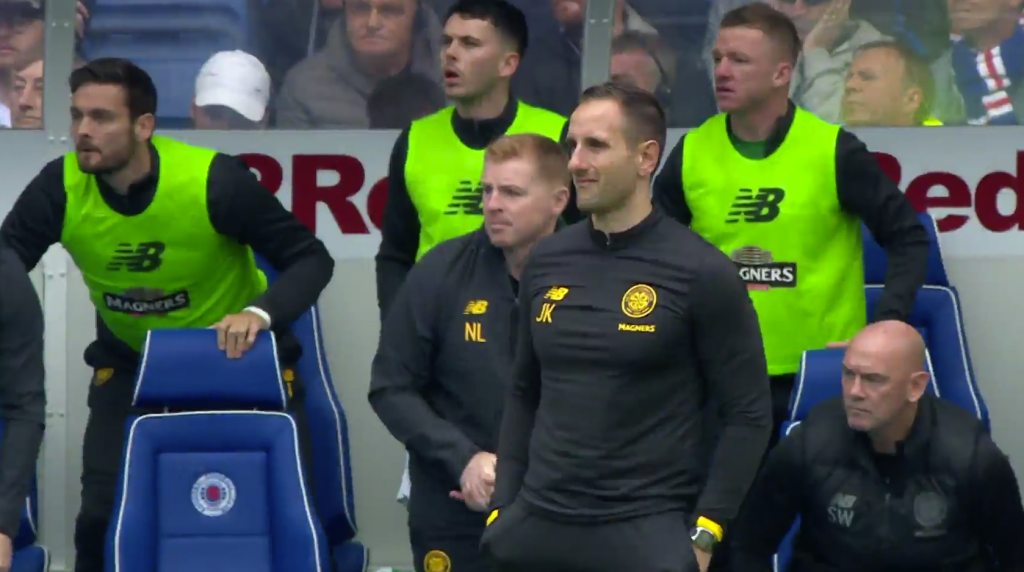 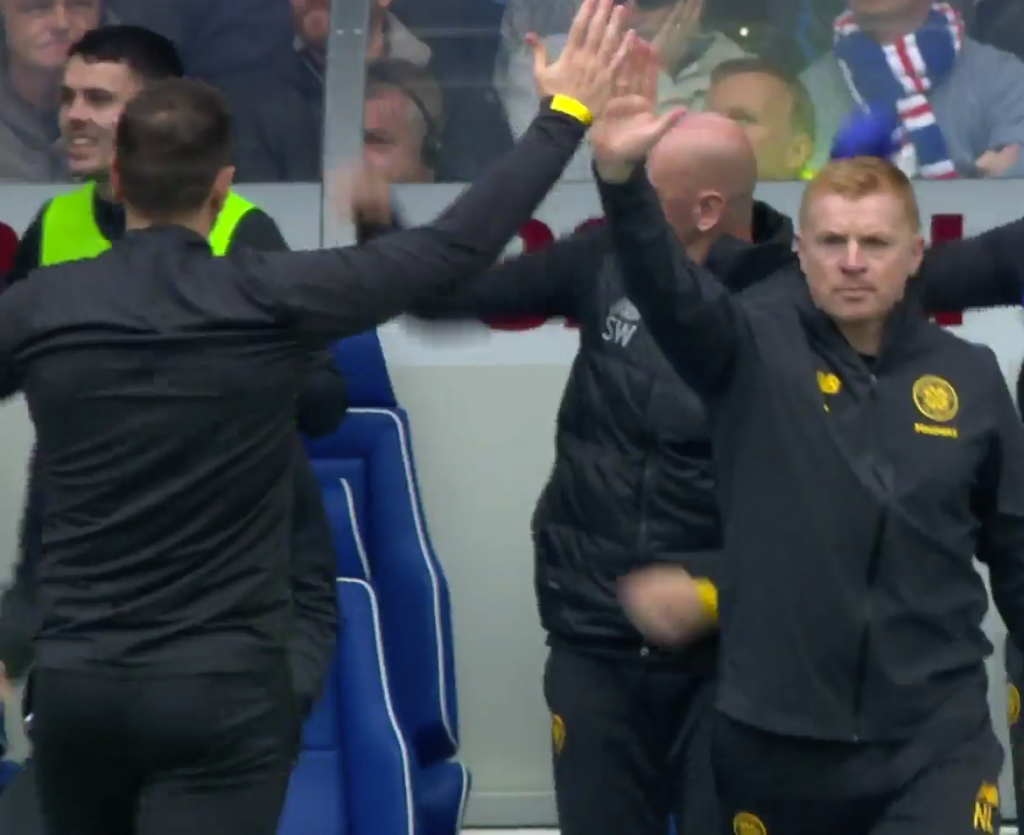 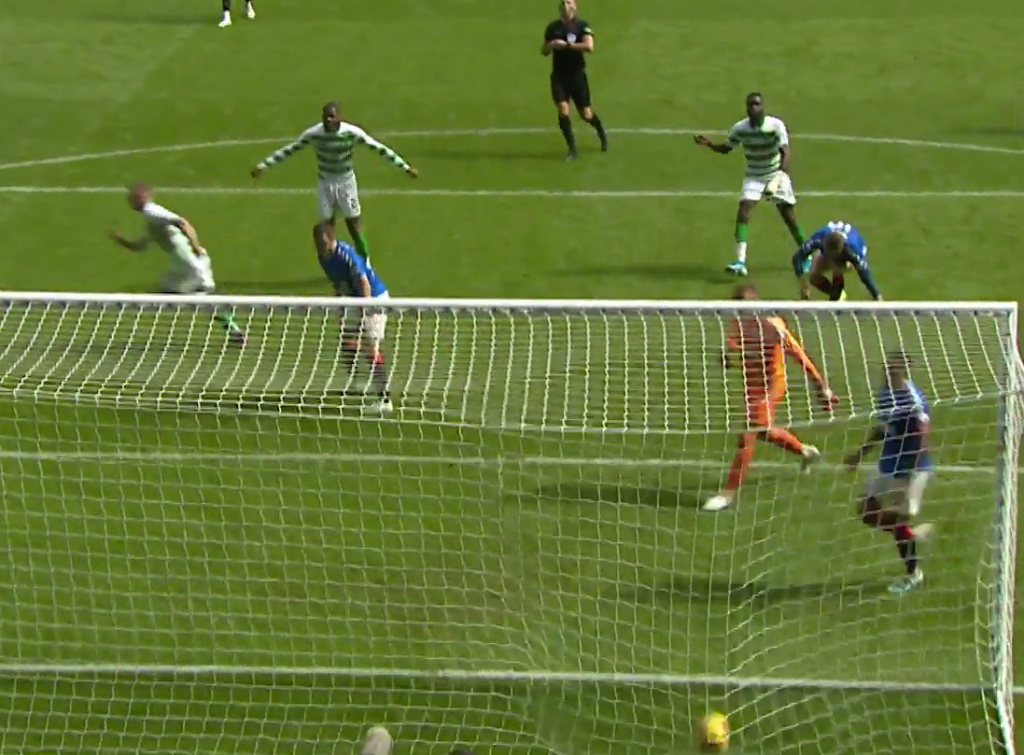 KILLER GOAL…Jonny Hayes races away after striking the second in stoppage time. 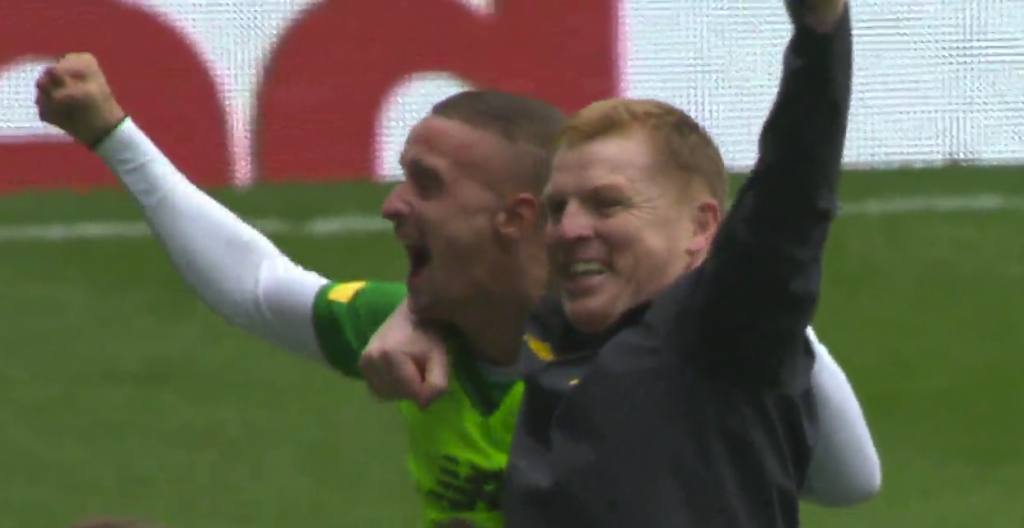 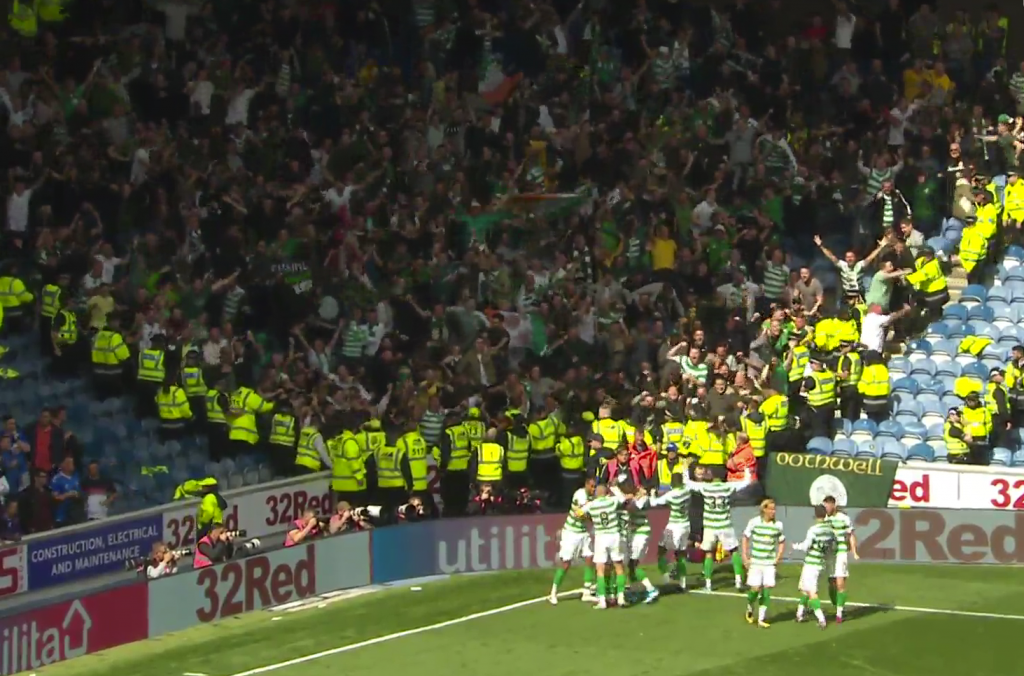