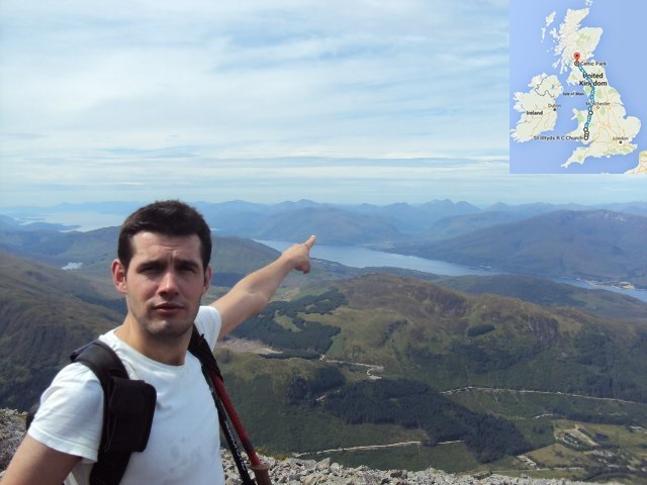 Something remarkable starts today. A few hours ago, members of the Tyneside No. 1 Celtic Supporters’ Club, and others, started walking in Merthyr Tydfil, south Wales. They plan to walk all the way to Celtic Park between now and 22 October.

The day they are scheduled to arrive at Paradise will be the first anniversary of the passing of Jonathan Thomas (above), a former member of the Tyneside CSC who died aged 30, after a battle with that most indiscriminate of illnesses.

Jonathan arrived in Newcastle 10 years ago from his native Wales, where he had been coached by a Celtic fan from Belfast. He joined the club and started making the pilgrimage north each home game to see Celtic.

While we all do the odd thing to mark the founding spirit of our club, Jonathan did far more than most. Alongside other Tyneside No. 1 CSC members, he walked from Newcastle to Celtic Park, then cycled from Swansea to the same destination, and completed the West Highland Way, all for Celtic charities.

Then he was taken from his family, friends and wife Sian, who he married a day before he lost his battle.

I don’t fancy walking from Merthyr Tydfil to Celtic Park, there are easier things to do in life, but when you learn what Jonathan did to raise money to help others, it seems like a reasonable undertaking in his name.

Sian, Iain McGovern (a good friend of mine), and the others will have left Merthyr already. They face an incredible journey, but two weeks from now they will walk up the Celtic Way and know they’ve lived up to the spirit of Jonathan, as well as our common 128-year heritage.

Money raised is going to the Celtic FC Foundation and Crohn’s & Colitis UK (despite what he did for our good causes, Jonathan also suffered from Colitis, a debilitating condition). This is a great Celtic supporters’ story. We’re so lucky to have people like this stand with us each week.  If you can help their efforts, here, please do so.