However, the ex-Dutch international frontman believes one player swing the championship in the direction of Govan – Brian Laudrup.

Burns’ team came so close to knocking their Glasgow rivals off course in season 1996/97, but came up five points short.

Van Hooijdonk, speaking to Kris Boyd and Robert Snodgrass on the Lockdown Tactics podcast, said: “We maybe didn’t feel we were a better team than Rangers but we felt we were more of a team.

“But Rangers had pure class in their individual players who could easily win games for them.

“Around November time, we felt we were really a force, probably stronger.

“But again, they had Laudrup. He was different class. Seriously, I’d never seen a guy playing on the highest level make football look so easy.

“If necessary, he just put his feet on the gas pedals and – boom! Or he would create something special. He was magnificent.”

Burns had put together a Hoops line-up that was easy on the eye with the likes of Van Hooijdonk, Paolo di Canio, Jorge Cadete and Andreas Thom in the ranks.

However, they just could not get over the Ibrox hurdle, A goal from Ally McCoist knocked Celtic out of the League Cup and Laudrup got the winner in jhis side’s 2-1 Scottish Cup semi-final victory. 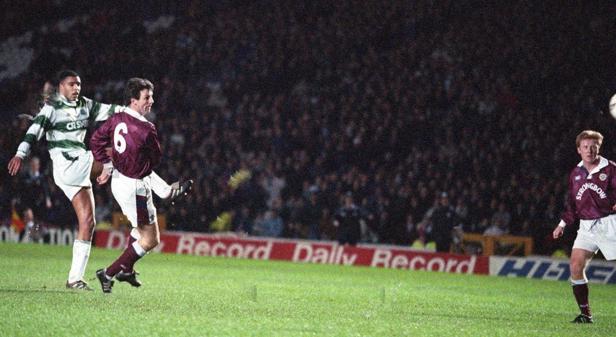 DUTCH TREAT…Pierre van Hooijdonk scores on his Celtic debut in a 1-1 draw with Hearts in January 1995 at Hampden.

Van Hooijdonk, who arrived in a £1.3million from NAC in January 1995, said: “Rangers had dominated Scottish football for a few years and nobody expected us to change that immediately.

“What was missing in our group? Maybe the experience of winning. The top players at Rangers had all played for big clubs in Europe and there was always pressure on them to win the title.

“The players Celtic signed were very good, but they came from smaller clubs. You have to adapt to that winning attitude and it takes time.”

Following a disastrous 1-0 Scottish Cup last-four exit to Falkirk, club icon Burns left Parkhead in 1997. But not before a soaring header from Van Hooijdonk against Airdrie won the Scottish Cup in 1995.

The skyscraper striker, now 50, added: “It was a horrible Final, we didn’t play well. But I was so happy we won. It was great for Tommy and the supporters.

“The day I signed for Celtic, I was at the hotel having dinner with my family and Tommy arrived with a pile of video tapes and photographs and told me to find out about the history of the club.

“He ended up staying for a bite to eat with my parents, a nice introduction to a great club.”

Jock Stein’s great Celtic side were the first to conquer Scotland on nine successive seasons from seasons 1966 to 1974.

*The Lockdown Tactics is partnered with The Kris Boyd Charity. For full Van Hooijdonk interview see YouTube and TLT socials from 4pm today.