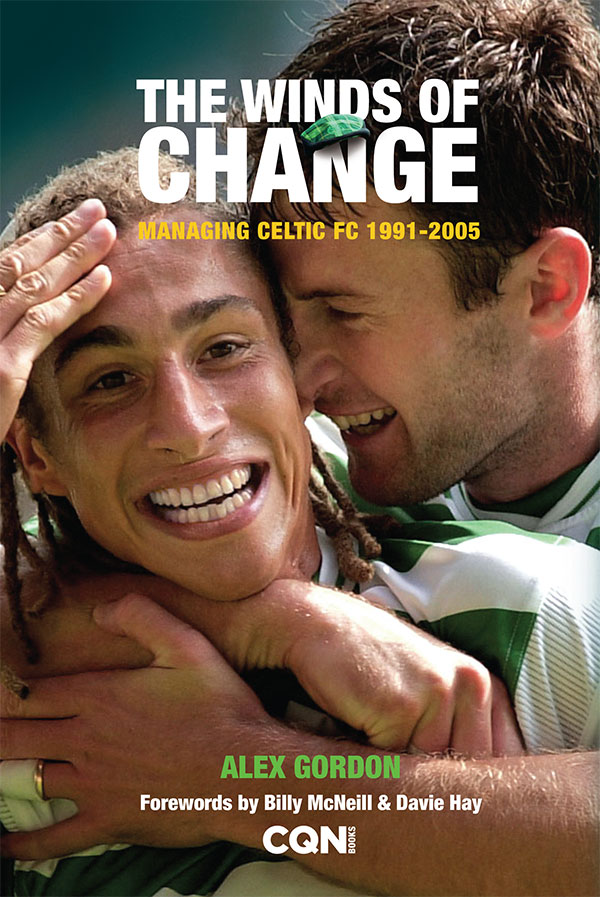 After taking us through both of Billy McNeill’s stints as manager, with Davie Hay’s time as Celtic boss in between, Alex Gordon this time charts the years of Liam Brady, who, of course, took over from McNeill in 1991, through to Martin O’Neill leaving in 2005. In between, there are the seven years of Lou Macari, Tommy Burns, Wim Jansen, Jozef Venglos, John Barnes and Kenny Dalglish.
THE WINDS OF CHANGE is both absorbing and  in-depth with some remarkable insights on the club before and after the arrival of Fergus McCann.
This is Alex Gordon’s ninth book on Celtic which makes him one of the most prolific writers on Celtic Football Club. We thought we’d ask him a few questions, and it turned into a two part marathon. This is part 1…
MEET THE AUTHOR…Part 1
In Caesar and the Assassin, you dealt with just two managers, Billy McNeill and Davie Hay. For THE WINDS OF CHANGE, how difficult was it charting the careers of the eight managers who were in charge of the club during such a volatile time of transition?
There was a lot more research, for a start. I was spoiled a bit with Billy and Davie because they are such good friends and I had a fair idea of just about everything that had gone on during their years as managers of Celtic. I got on very well with Liam Brady and, fortunately, he trusted me. So, as far as the book was concerned, that got us to some good inside information that hadn’t been seen before which I believe is vitally important. Liam and I had a mutual friend – an Irish journalist in London – long before he arrived at the club. He knew I was a Celtic fan. Incidentally, that’s something I have never attempted to conceal. Why would I try to tell people I was a St Mirren, Partick Thistle or Morton supporter? I was never afraid to admit my feelings for the club I had supported as a kid along with my father and two uncles in the old Jungle every home game for years. For Liam and me, it helped that I just happened to be the Sports Editor at the Sunday Mail which was by far the biggest-selling newspaper in the country at the time. To be honest, I don’t think my Celtic leanings ever interfered with my job. I had to be strictly professional and, most assuredly, I wouldn’t have lasted five seconds, far less twenty-seven years, in newspapers if that hadn’t been the case.
We’ll get back to newspapers later, Alex. How did you get on with the other managers?
I had known Lou Macari during his time as a player with Celtic and I always found him to be an agreeable chap. I was sad for him that it didn’t work out at Celtic and it was a shame that the parting should have been dragged through courts. But, as the title of this book tells you, it was very much a transitional period for the club and change can sometimes be hurtful. Tommy Burns was simply one of the nicest, most honest individuals I have ever met. He was a genuine source of inspiration to all with his awesome courage in latter years before his sad passing. He was a real Celtic man. Wim Jansen tended to keep himself to himself and, as far as I was aware, he had no friends in the Press. Davie Hay managed to fill in a lot of blanks at the time. I think the readers will be more than a little interested in some of the names who could have joined Celtic during the four years of Tommy and Wim. 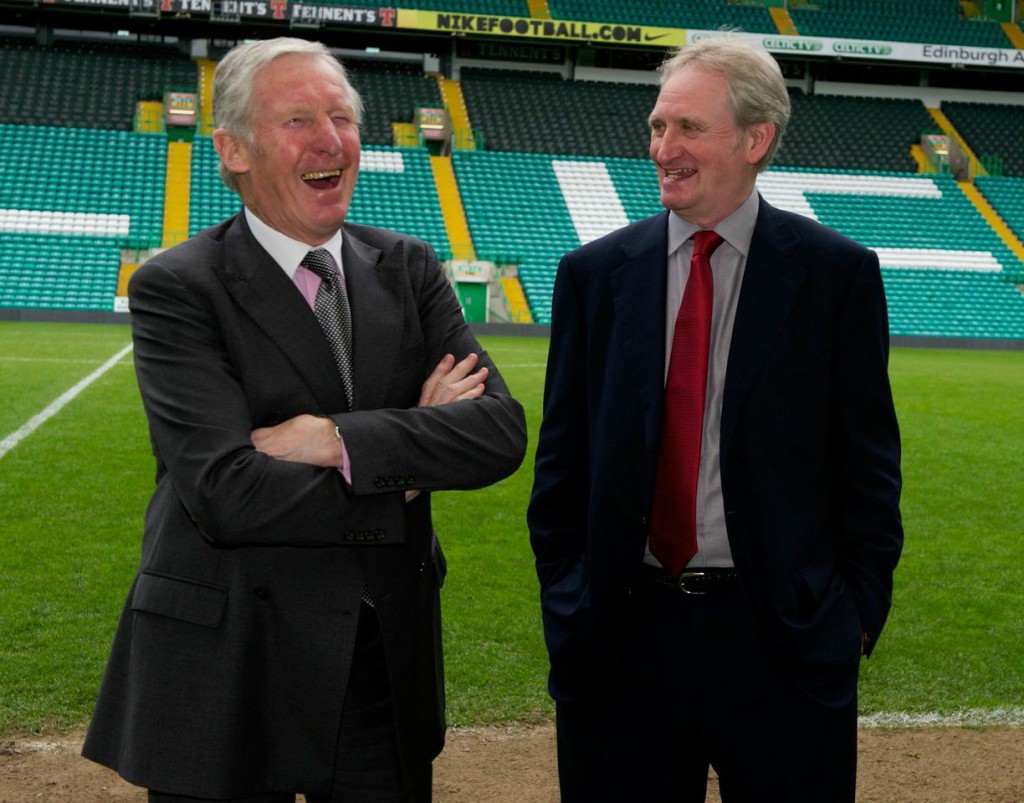 Do you want to give us a clue?
I am honour-bound not to give away secrets within the book, but I can reveal there was a raw teenager who was scouted by Davie during Tommy’s spell whose name will certainly surprise you. He had played only one season in England, but Davie and Tommy saw something in him and they wanted him for Celtic. His club refused to sell and that was the end of the matter. However, a few years later, he moved in a massive multi-million pound deal and went on to become a household name and a regular international. He would have been some player at Celtic. Sorry, I can’t say more than that. The answer is in the book!
How about the other managers at the time?
Well, Jozef Venglos was very much like Wim and, basically, kept away from the limelight. I don’t think any newspaperman got an exclusive interview with him. Luckily, though, we had another mutual friend – this time a Glasgow businessman – and I was tipped the wink every now and again. Celtic actually very kindly invited me to the directors’ box for his very first game, a Champions’ League qualifier against St Patrick’s Athletic which ended in a goalless draw. It wasn’t an inspiring start, but I think Venglos managed to put together a very watchable Celtic team and, of course, Lubomir Moravcik was one helluva legacy.
How about John Barnes and Kenny Dalglish?
From Jock Stein onwards, John Barnes was the first Celtic manager I never got to meet. When I was younger and just in the door at newspapers, I was introduced to Jock Stein. That was amazing. There I was talking to Big Jock, an all-time hero. I’m not often in awe of anyone, but Big Jock was something else. I’ve actually got a book of my newspaper memoirs, entitled ‘Jinx Dogs Burns Now Flu’ (don’t ask!) and I devote a chapter to Jock and reveal the things he did for Celtic away from the actual football. If he hadn’t been such a wonderful manager, he would have been a huge success in Press Relations. When Jock arrived at the club he made sure Celtic had more column inches than any other club – including Rangers – in every newspaper. As my good mate Bertie Auld always insists, ‘When Big Jock was in town, the foxes took to the hills!’ Ironically, I did Kenny Dalglish’s first magazine interview shortly after Celtic had beaten Rangers three times at the start of season 1971/72 and Kenny, of course, scored in each game. We kept in touch over the years and he, too, did a lot of things which were never trumpeted in the media. He couldn’t have been more helpful when I was on the benefit committee for Mike Galloway whose career had unfortunately ended prematurely following a car accident. Peter Lawwell, who wasn’t with Celtic at the time, was also on that committee and I can say here and now I was impressed by him. He took care of the financial side of things and made certain Mike got a fabulous cheque at the end of the day. Mike actually got double what he had anticipated. No-one on that committee took a penny. Kenny played in the fundraiser at Celtic Park on March 3 1996, brought his family up from Southport, installed them in a five-star hotel in Glasgow for the weekend and he, too, never asked for expenses.
What was your take on Martin O’Neill?
As I have written in the book, I was fortunate enough to be one of a few selected journalists by Celtic to go along to a quiet hotel on the outskirts of Glasgow to meet the new manager. I’ve put my thoughts in print in THE WINDS OF CHANGE after that first meeting. In his five years in charge, I never had any reason to change my mind about my initial observation. You could say he made quite a first impression!
Okay, let’s go back to the beginning. When did you first start supporting Celtic?
My father, John, was a big Celtic fan and it probably kicked off from there. His favourite player was John Hughes, the original ‘Yogi’. My dad and my two uncles, George and Hughie, used to sing ‘Feed The Bear’ incessantly during home games. Unfortunately, my dad had long since passed when I co-authored Big John’s autobiography, ‘Yogi Bare’, last year. We met a couple of times a week in the Burnside Hotel when I got his thoughts down in print. We took turns in buying the fish suppers, so I can honestly say that I got to ‘Feed The Bear’. My dad would have been proud! 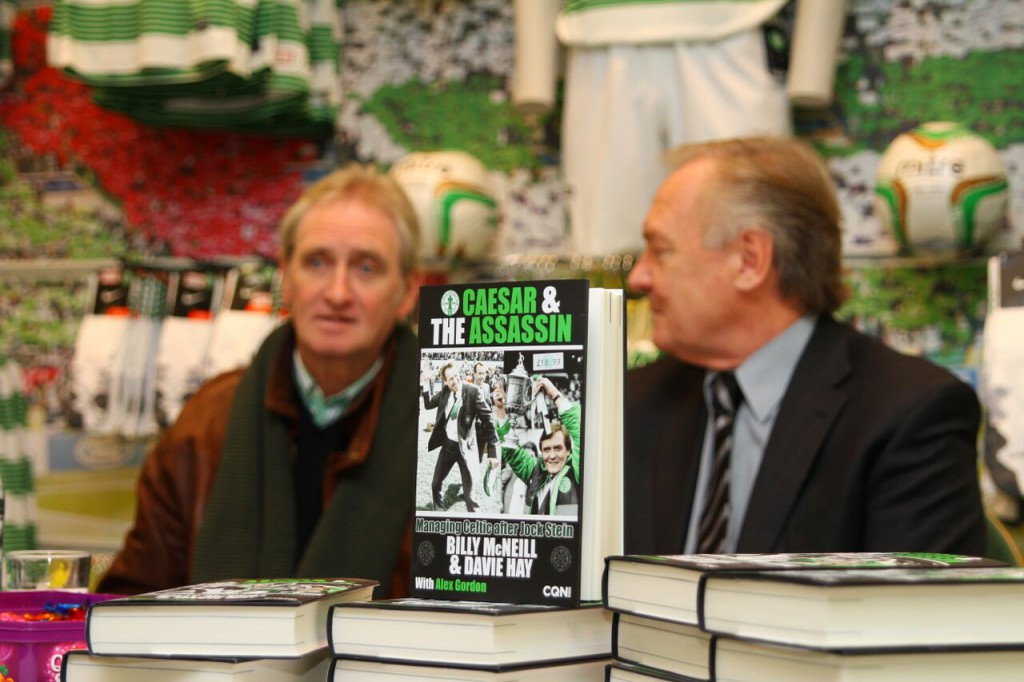