Celtic Quick News on News Now
You are at:Home»Latest News»‘THERE ARE GOING TO BE CHALLENGES,’ WARNS POSTECOGLOU
By CQN Magazine on 21st February 2022 Latest News

ANGE POSTECOGLOU knows only too well that football rarely follows the script.

A misplaced pass, a goalkeeping error, a missed opportunity or a bad call from the match official can often change the complexion of a game.

With 11 games still to be played and a visit to Easter Road to take on Shaun Maloney’s Hibs side on Sunday to be confronted, the Greek-Australian gaffer is taking absolutely nothing for granted as far as the Premiership title race is concerned.

Postecoglou is also aware expectancy is growing among the ranks of the support following last season’s wretched campaign when the quest for the historic tenth successive championship was blown shortly after the turn of the year.

Things have changed rather dramatically in the east end of Glasgow this time around and the Celts men are now leading the charge for the flag by three points after yesterday’s results at Parkhead and Tannadice. 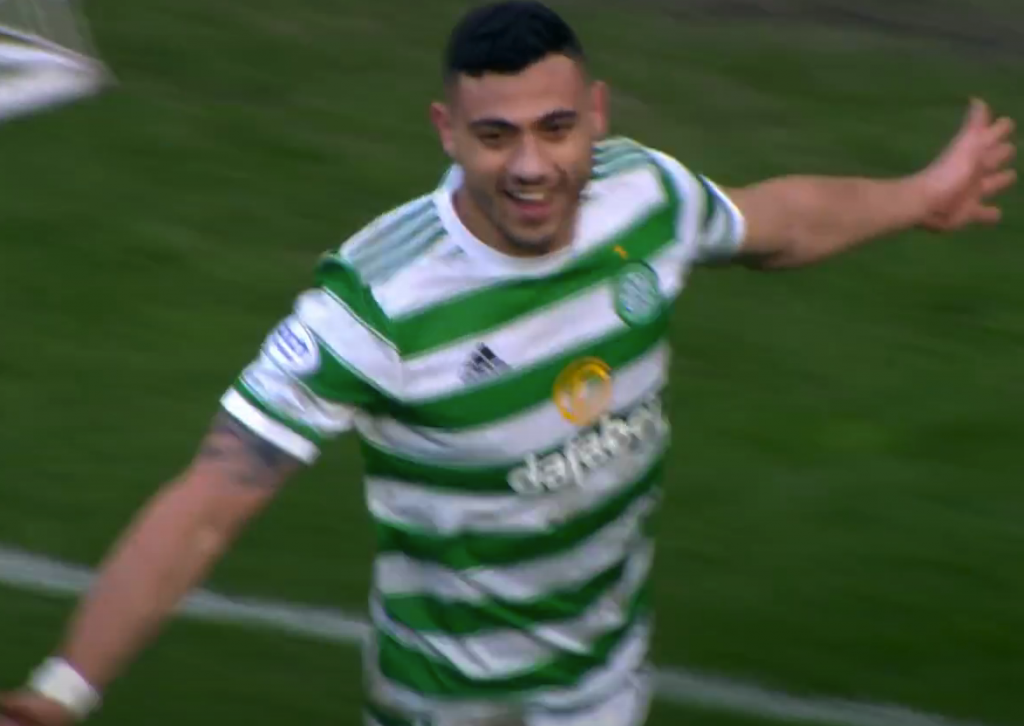 THREE CHEERS…Giorgos Giakoumakis celebrates one of his hat-trick against Dundee.

Giorgos Giakoumakis fired in the perfect hat-trick – right-foot and left-foot shots and a header – to seal a late 3-2 win over struggling Dundee while Giovanni van Bronckhorst’s Ibrox outfit had drawn 1-1 with Dundee United in the earlier kick-off.

The manager sent his players out to face Mark McGhee’s Tayside club in the knowledge of the slip by their nearest challengers, but he is adamant there is still a long and precarious journey ahead until the last kick of the ball in his debut season in Scottish football.

Postecoglou said: “What we have done really well is focus on ourselves. It’s not long ago we were six points behind.

“If we start thinking about other teams and what they are doing – and sweating on other results – we wouldn’t be where we are.

“It’s going to be a tight race. I don’t expect us to just go sailing smoothly along. There are going to be challenges for this team. That’s the nature of the first year of a rebuild. At the moment, we are overcoming the challenges and we are in a good spot in the league.

“It will be tough game in Edinburgh next week. There are no easy games. This was not an easy game.

“People see you are playing the bottom side at home. And we should have won it comfortably. Absolutely. But football doesn’t work that way.

PROBLEM No.1…the Celtic defence looks on as Danny Mullen opens the scoring from a left-wing corner-kick.

“Everything you get you’ve got to earn. Football finds a way of making you earn it and we had to earn it on this occasion.

“Whatever we get out of this year, we will have to earn. It’s not going to come from anyone giving us anything, so there is no point in worrying about other results.”

However, there are still worrying aspects in his team’s play with Dundee scoring from a couple of deadball efforts and Postecoglou, speaking to the Daily Record, added: “Obviously, the two set-pieces are disappointing because, apart from that they didn’t get in our box, it is something that obviously we need to try to rectify because it would have been a shame for the players more than anything, the effort they put in, if they didn’t get the rewards, but again credit to them, they found a way to win.

“But it’s a concern. When we’re dominating a game so much, defending so well and keeping them away from goal, Joe Hart didn’t have a save to make.

“I don’t think he even touched the ball with his hands. If they can just lob balls in the box and we concede, that’s not good.

“It’s something we need to address, have a little more conviction in our box, the same way we do in the opposition box. There are definitely lessons in there, but that’s part of our continual improvement as a team.

“There are still areas we need to get better at and that’s one of them.”