Celtic Quick News on News Now
You are at:Home»Latest News»‘THERE ARE NOT MANY CLUBS LIKE CELTIC IN THE WORLD,’ FORREST
By CQN Magazine on 6th August 2019 Latest News

JAMES FORREST is eager to sign an extension to his contract to remain at the champions for life.

The Scotland international winger wants to follow in the footsteps of Hoops legends such as Billy McNeill and Paul McStay and become a one-club man.

Forrest emphasised his desire and admitted: “There are not many clubs like Celtic in the world.”

Neil Lennon revealed he hoped to persuade the 28-year-old raider to stay at Parkhead beyond the end of his current contract which will run until June 2022, as reported in CQN.

Forrest, speaking to the Evening Times, said: “I’ve not hidden the fact that I’d like to extend. It’s a busy period at the moment, with a lot of games coming thick and fast, but when the time is right I’d love to commit to stay here for as a long as I can.

“Nowadays you don’t get many one-club players, but there are not many clubs like Celtic in the world.

“The fanbase and everything about the club is incredible, I’ve really seen that over the last few years and I’d love to stay a part of that for as long as I can.

“Happiness is important. If you ask any footballer, you want to enjoy your career and that’s how I feel at Celtic. 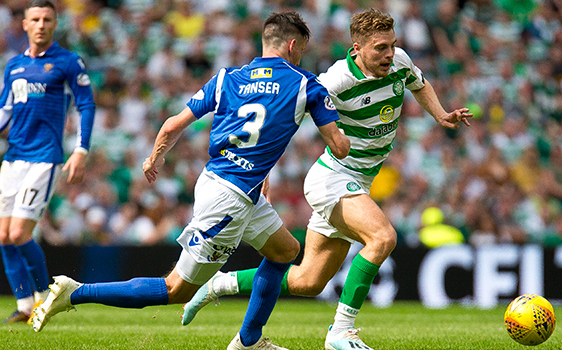 “You can take it for granted, but in every game that Celtic has there is massive pressure, whether it’s at home in the league one day and then Champions League a few days later.

“The pressure is always there to keep you going rather than some places where you might be able to sit back and chill a bit more. That motivates you to want more.

“You want to play in the Champions league and obviously it helps you with the national team as well. It’s a great club to be at.

“If you look here and at clubs down south you don’t see one-club men very much and a lot of managers move about, as well.

“But I think it’s a positive thing if you are staying at a big club like Celtic for so long. The key is to not look too far ahead, take it a game at a time and just keep working hard to be here.”

Forrest has played a key role in the Celtic success story and has been one of the club’s most consistent performers during the unprecedented treble treble triumphs.

Lennon gave him his chance in his first stint as manager and the player has emerged as an influential player for the club and has a massive silverware haul of 17 winners’ medals to show for his efforts.

Forrest is convinced there is more to come for him and Celtic.