Celtic Quick News on News Now
You are at:Home»Latest News»‘THEY GIVE ME THE HEEBIE-JEEBIES,’ ADMITS LENNY OF TITLE WINNERS
By CQN Magazine on 4th May 2019 Latest News

NEIL LENNON admitted his Celtic players give him the “heebie-jeebies” – but he also paid tributes to his eight-in-a-row champions this afternoon.

The Hoops only needed one point from their remaining three fixtures to make certain of yet another consecutive crown, but they did it in style with a 3-0 trouncing of Aberdeen at Pittodrie this afternoon.

Mikael Lustig scored with a brilliant diving header just before the interval to send the Parkhead glory squad on their way to another triumph.

Jozo Simunovic headed in a Billy McNeill-like effort from a Callum McGregor left-wing corner-kick for the second while Odsonne Edouard rolled in the third in the fading moments.

Amazingly, it was Croatian defender Simunovic’s second goal in a week after scoring only two in his previous four years as a first-teamer.

It was the visitors’ sixth consecutive win at Pittodrie and they have now claimed seven goals at a tough venue in this campaign following their 4-3 victory on Boxing Day. 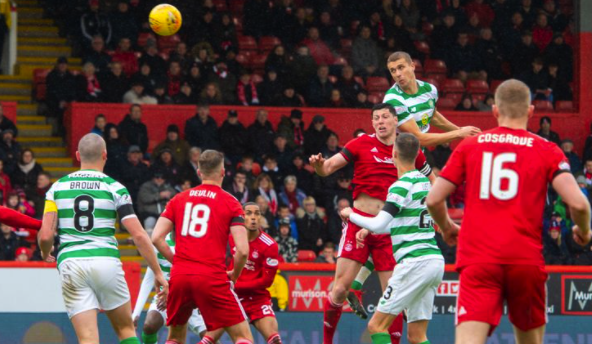 HEADMASTER…Jozo Simunovic rises above Scott McKenna to head in the second goal.

Interim manager Lennon, speaking to Sky Sports, said: “The players were fantastic today. They give me the heebie-jeebies sometimes with the way they play and take chances.

“We needed the opening goal because Aberdeen had had some great chances early on.

“I have to pay tribute to Brendan. He has to get a huge amount of credit. This title success is down to the foundations he laid here. I was lucky enough to carry it on.

“It’s been really tough. It’s been the toughest piece of management for me. I know from the outside people think it looks easy.

“But it’s basically been coming in on your own and picking up. There was a lot of discontent around the club.

“It’s a real privilege for me to be here as interim manager, or as any manager.” 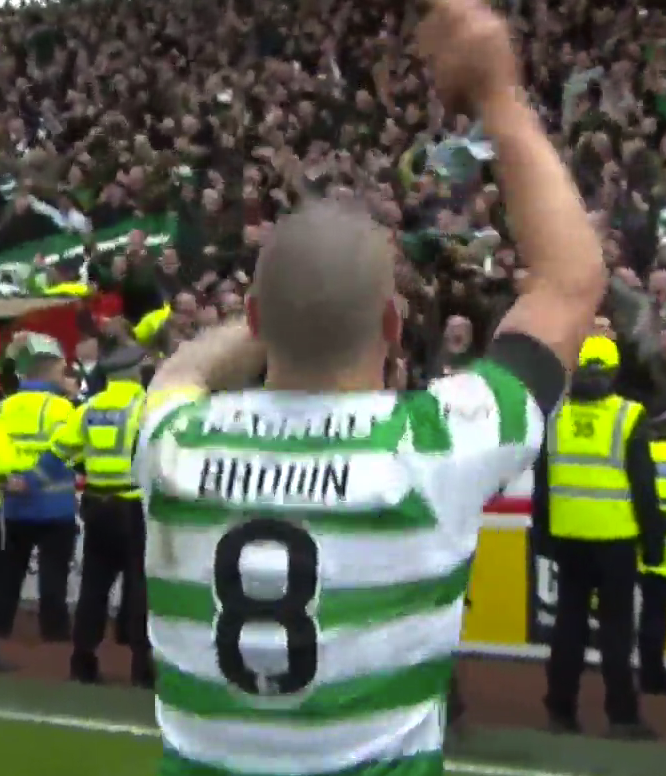 EIGHT IN A ROW…and No.8 Scott Brown celebrates with the fans.

Lennon has also paid tribute to his rock-solid rearguard who claimed another clean sheet during an unbeaten domestic campaign in 2019.

He added: “With all the emotions of what happened this week with Billy’s funeral we had to keep calm. There was a lot of negativity around us and a lot of fake news.

“But the players have kept their focus really well.

“Scott Bain has been unbelievable since I came in. He made another world class save today.

“Simunovic and Ajer have formed a great partnership. Lustig has been a great player for this club for a long, long time and Tierney is a Celtic great already.

“It’s a great moment for the players and the supporters.”

The Parkhead men face a trip across Glasgow to take on Steven Gerrard’s outfit at Ibrox a week tomorrow and wind up the Premiership campaign with a game against Hearts at Paradise the following Sunday.