Celtic Quick News on News Now
You are at:Home»Latest News»‘THINGS CAN COME AT YOU HARD,’ ADMITS FOCUSED HART
By CQN Magazine on 11th March 2022 Latest News

IT TOOK Joe Hart a mere 30 games to win his first silverware as Celtic’s goalkeeper.

With only eight matches to play in the Premiership – and with the Hoops three points clear – and the Scottish Cup quarter-final against Dundee United to be overcome at Tannadice on Monday night, the netminder could be within three outings from a medal in the national tournament.

However, Hart, who has provided an emphatic answer to the team’s No.1 problem of the previous campaign when Vasilis Barkas, Scott Bain and Conor Hazard failed to convince, refuses to take anything for granted.

The 34-year-old 75 times-capped England international shotstopper said: “You can’t afford to think like that. If you’ve spoken to anyone who had achieved those feats, every single one of them will say that the only way they were achieved was living in the moment and focusing on every game. 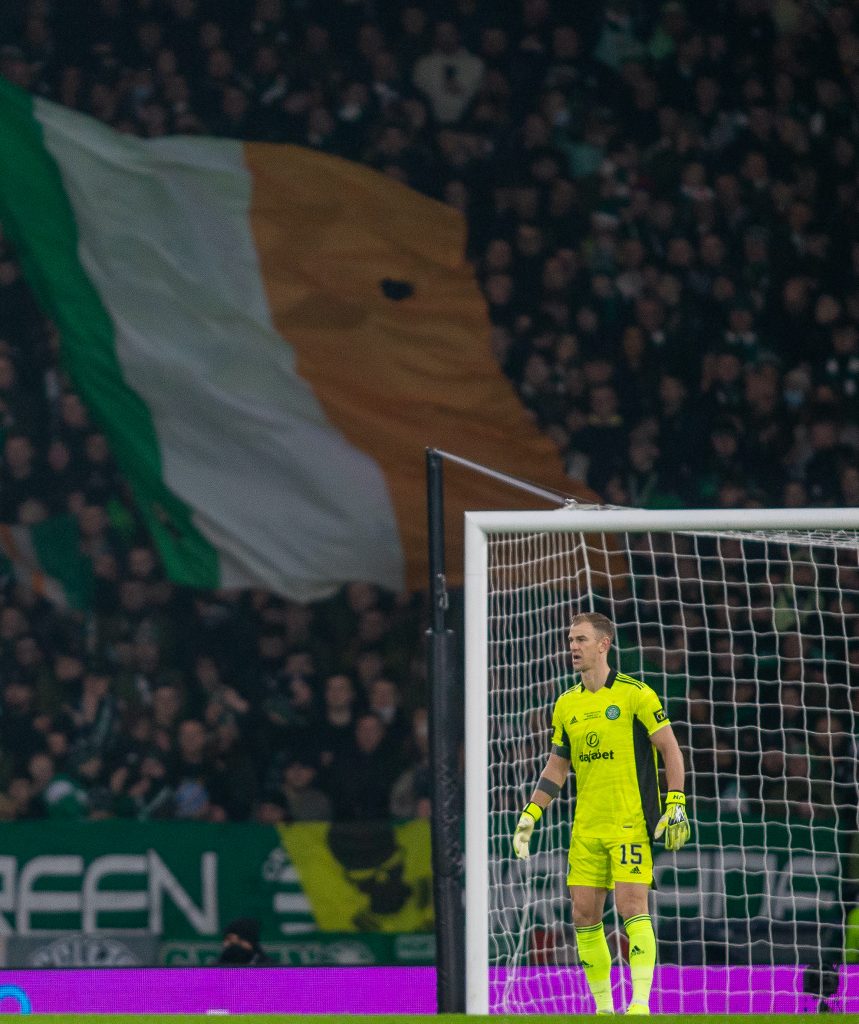 NO FLAGGING…Joe Hart protects the Celtic goal in the Premier Sports League Cup Final against Hibs at Hampden on December 19 2021.

“Because the moment you start looking too far ahead, in life, not just in football, things can come at you hard.

“We play to win, so obviously if you do the maths with that, it puts us in a good place, but it’s not quite that simple as it’s been proven many times.

“We’re in the quarter-finals and there are eight teams with that dream – eight teams with exactly the same dream as us. So, there’s nothing that’s going to be given to us, and if we are to be there on the final day, it will be down to focusing on each game and taking them each as they come and working hard.” 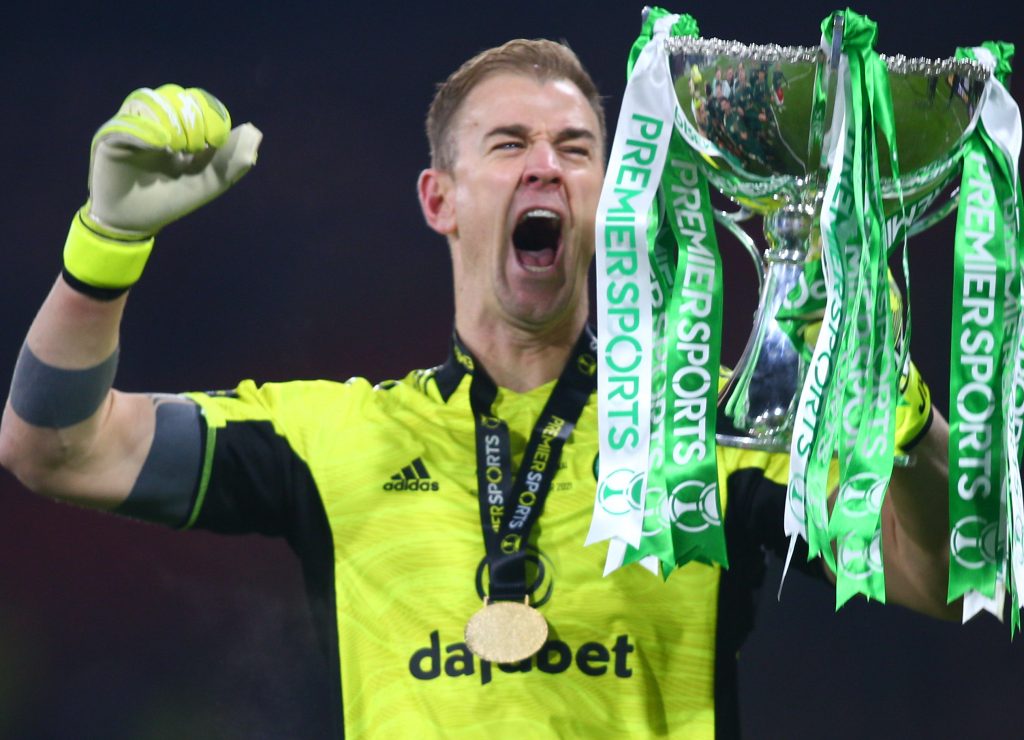 ROARING SUCCESS…Joe Hart yells with joy as he holds aloft the silverware.

Hart played his part in the Premier Sports League Cup Final triumph over Hibs at Hampden on December 19 where Kyogo Furuhashi took the spotlight with his excellent double in the second-half after the Edinburgh club had opened the scoring shortly after the turnaround through Paul Hanlon.

The Japanese striker levelled only moments later before scoring an exquisite winner with a measured lob over the head of the stranded Matt Macey.

Hibs had a chance to take the Final into extra-time when an opportunity was presented to Joe Newell in the sixth-minute of stoppage time, but the keeper reacted brilliantly to get down and push his netbound shot to safety.

Reflecting on the Hoops’ 3-0 win on Tayside at the start of December, Hart, speaking to Celtic TV, added: “It wasn’t comfortable, it was down to us playing exceptionally well. They are a tough nut to crack, they are threatening on the break. 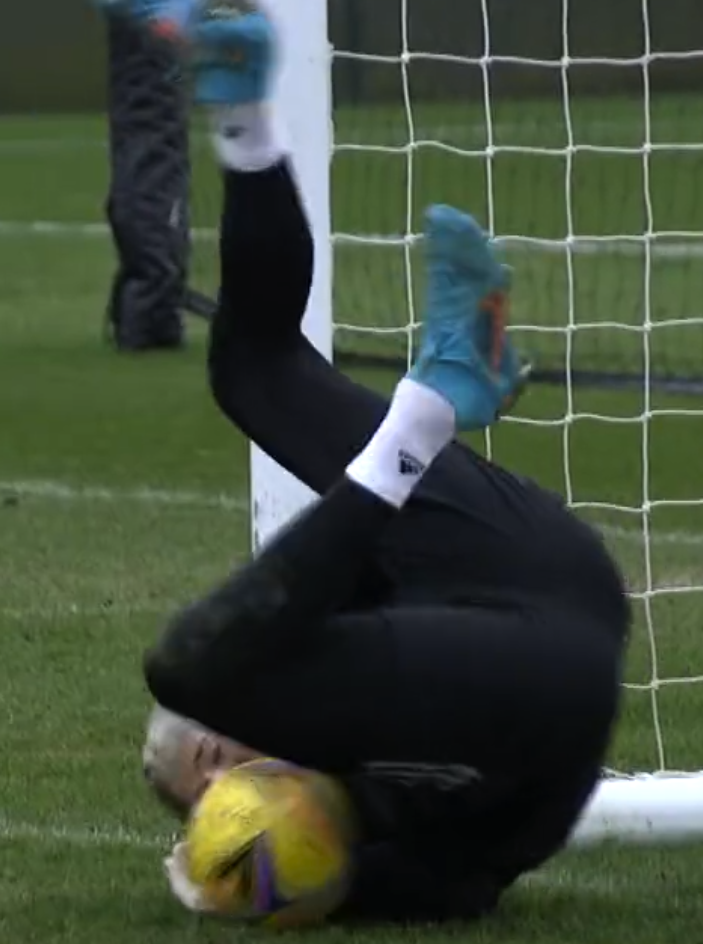 GETTING DOWN TO IT…Joe Hart goes through a training routine as he prepares for Monday’s Scottish Cup crunch against Dundee United at Tannadice.

“I just love playing football, I love being involved in competitions at the latter end, love being part of this group that I’m part of right now, and I include the fans in that group because away games are a lot of fun at this club as well as home games.

“But they’re only fun when we perform and I would say that the majority of the time we’ve really showed up this year.

“Even in games that we haven’t won, we’ve had strong showings. That consistency is something that I’m enjoying being a part of and I’m hoping to continue.

“Deep down, I’m just a guy who loves to play football. I would play in front of nobody, so the fact that we get the opportunity to do it when there’s a lot on the line, under the lights, a good atmosphere against a tough team, it’s going to be a good night, hopefully.”