LEIGH GRIFFITHS fired blanks when he came on for the second-half of Celtic’s 1-0 defeat against Bohemians Prague in the second game of the pre-season tour of Austria yesterday.

But the livewire frontman, just three goals short of his century of goals for the Hoops, reckons he will be well up for the task when the competitive stuff starts.

Griffiths also accepts he will have to overcome another challenge from boss Brendan Rodgers in his bid for a first team place.

Two years ago, having claimed an astonishing 40 goals in the previous campaign for Ronny Deila, the Scotland hitman came up against Moussa Dembele when he was the Irishman’s first signing for the club on a £500,000 Development fee from Fulham.

Last summer, Rodgers added to the Hoops’ firepower when he brought in Odsonne Edouard on loan from Paris Saint-Germain and then made the move permanent in a record-breaking deal that could go to £9million.

Griffiths said: “It doesn’t get any easier for me. Moussa came in  two years ago and then Odsonne  last season. 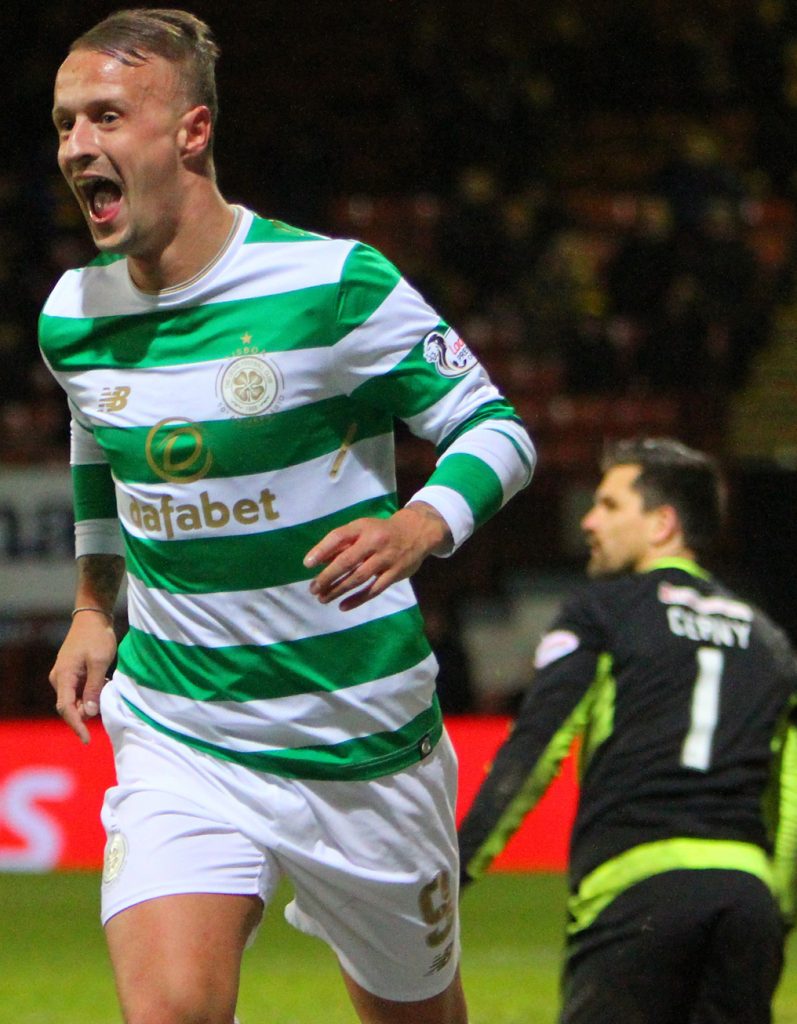 THAT WINNING FEELING…Leigh Griffiths turns away after hitting the points-clincher against Partick Thistle keeper Tomas Cerny at Fihill in January.

“The manager keeps putting hurdles in my way and I need to step over them all the time. But I will do my best to stay in the starting line-up.

“What was my reaction when Odsonne signed? You couldn’t publish it!

“But that’s purely from a selfish perspective. You want to play as many games as you can. From a team point of view, it’s great that we can bring in that kind of quality.

“We have earned a lot of money from the last two Champions League campaigns and the gaffer should be allowed to spend it.

“Odsonne has great potential. Like Moussa, he’s big, fast and strong. He can finish, too. You want the best players here to have the best chance of succeeding and my aim is to build up my fitness and stay injury free.

“I need to apply myself and take a chance when I do get it. The manager has always said everyone is going to get game-time.

“At times it will be difficult sitting on the sidelines, but when called on you need to take the chance. If you do that you could be starting the next game.

“People can say I’m third choice, but if you ask the manager I don’t think he’d say anyone is first, second or third choice.

“He would say he has three quality strikers who can all do different jobs. It’s about the opposition and what he wants to do tactically.”