Celtic Quick News on News Now
You are at:Home»Latest News»‘THIS ONE IS OURS AND WE AIM TO KEEP IT,’ CELT’S CUP RALLYING CALL
By CQN Magazine on 5th April 2021 Latest News

SCOTT BAIN has conceded one goal in the four games John Kennedy has been in charge and only five in total since he returned to the first team 12 outings ago.

The former Scotland international keeper was given the nod by ex-boss Neil Lennon to face Hamilton Accies on January 27 where he kept a clean sheet in a 2-0 win.

Vasilis Barkas, the £4.5million arrival from AEK Athens in the summer, was finally axed after another dire display in the 2-2 draw at Livingston and Bain appears to have settled the Hoops’ No.1 problem position with the season heading to a conclusion with the Scottish Cup the only chance of silverware.

The holders will face a trip to Ibrox for their fourth round tie after yesterday’s ballot and the encounter gives the team the perfect opportunity to get something from the derbies in this campaign. They have been the better team on the past two occasions, but have had to settle for just one point in the recent 1-1 draw in the east end of the city.

Unfortunately, Bain conceded his solitary goal in Kennedy’s reign that afternoon after the defence yet again failed to deal with a set-play. 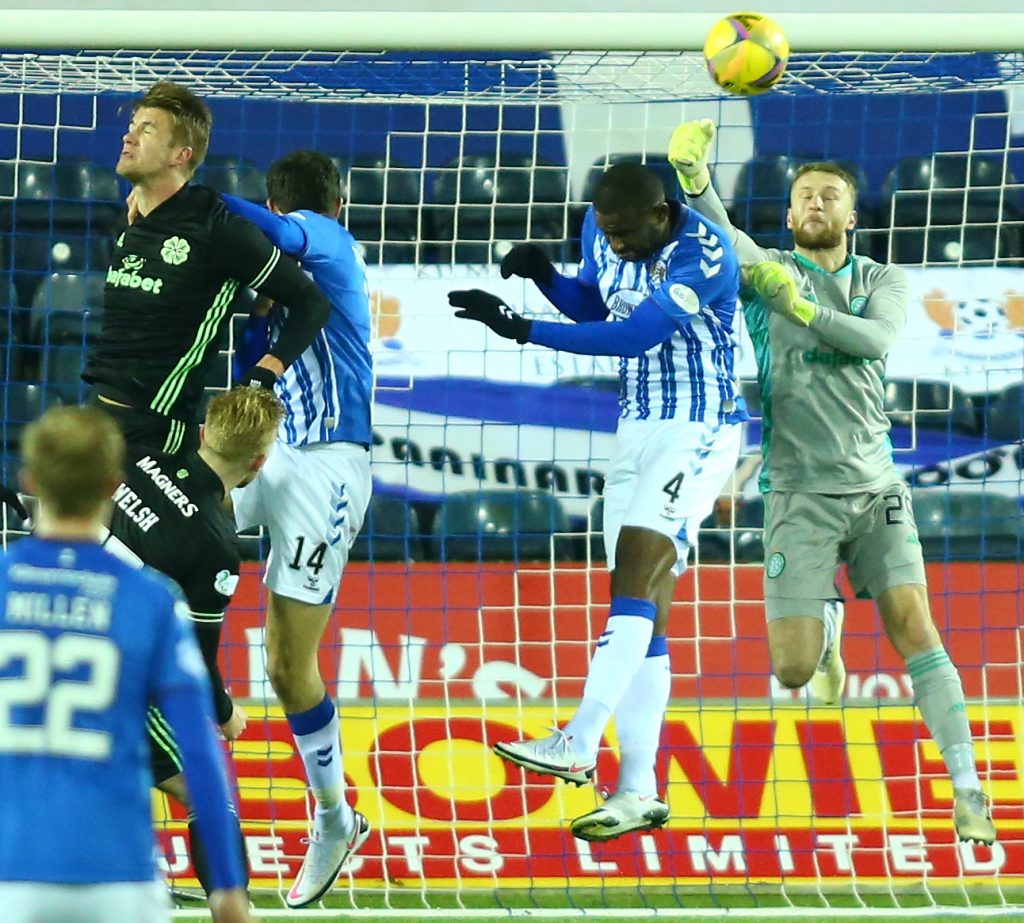 AIR WE GO…Scott Bain rises to punch the ball to safety in the 4-0 win over Kilmarnock at Rugby Park in February.

However, the former Dundee netminder, who was signed by Brendan Rodgers on a permanent contract after an original loan switch in 2018, is focused on the trip to Govan while trying to block out all the managerial hysteria that has been swirling around Parkhead since Lennon’s exit in February.

Bain said: “I don’t think we’ve been distracted by it. There’s been a lot of talk and speculation for a while now going on in the background.

“It seems to be ramping up these last couple of days, but it’s nothing we can control.

“We can only control what happens on the pitch and we’ve been working hard in training with John Kennedy and the coaching staff.

“We’ve been really enjoying it and I think that’s been seen in the last few games.

“The Scottish Cup is a huge incentive. We’ve had huge disappointment in the other two competitions. This one is ours and we want to keep it.

“We don’t want to give it up easy, so it gives us added motivation for the last five games of the season.

“We don’t want to drop our standards.”

RISE AND SHINE…Scott Bain goes through a pre-match routine.

The 29-year-old shotstopper continued: “You need to perform every week at this club regardless of the situation.

“But there is a little bit of added pressure. You want to put in good performances for whoever might come in if someone has been watching in the background.

“When you at Celtic there is always pressure on the performances because there’s always someone biting at your heels trying to take your place.”

The trophy holders won through to the tie at Ibrox with a 3-0 victory over League One leaders Falkirk while Steven Gerrard’s side saw off Cove Rangers 4-0 in Glasgow last night.

As they have done in the matches against Aberdeen, Dundee United and their city neighbours, Celtic were in control, but their finishing once again was awful. Ryan Christie, in particular, was wasteful with his efforts and three hurtled high, wide and anything but handsome.

The Scotland international playmaker looked mightily relieved when he eventually got one on target in the second-half to double the team’s advantage after James Forrest’s opener in the 56th minute. Substitute Mohamed Elyounoussi clipped in a clever third to put a better complexion on the scoreline.

During the one-way traffic of the first-half, the home side had TWENTY-ONE shots at goal with only three on target which didn’t unduly trouble the opposition keeper.

Bain, speaking to the Daily Record, added: “It was job done. The main goal was obviously to get in to the next round of the Cup.

“But we also followed that up with a really good performance, especially in the second-half.

“It took us a while to get going, but once we got the first goal we really lifted it and were impressive in the final third.

“The lads had to be patient. We had about 40 shots on goal and 80 per cent possession.

“It’s always difficult when you face a team from a lower league. It’s like they say, it’s their Cup Final plus they want to put on a good performance live on the television.

“That means it can sometimes take a bit of patience, but we did that, we scored a few goals and probably could have had a few more.

“The quality of the boys shone through in the end.

“It also gave me a quiet night – I wish they are all like that!”