Celtic Quick News on News Now
You are at:Home»Football Matters»THOMSON BACK IN CHARGE FOR SEMI-FINAL
By CQN Magazine on 20th January 2016 Football Matters
CRAIG THOMSON will take charge of Celtic’s League Cup semi-final against Ross County at Hampden Park on Sunday, January 31.
The experienced referee was involved in controversy earlier in the season as the champions lost 2-1 to Aberdeen at Pittodrie.
Leigh Griffiths was convinced Andrew Considine should have been sent off after after his foul on him. 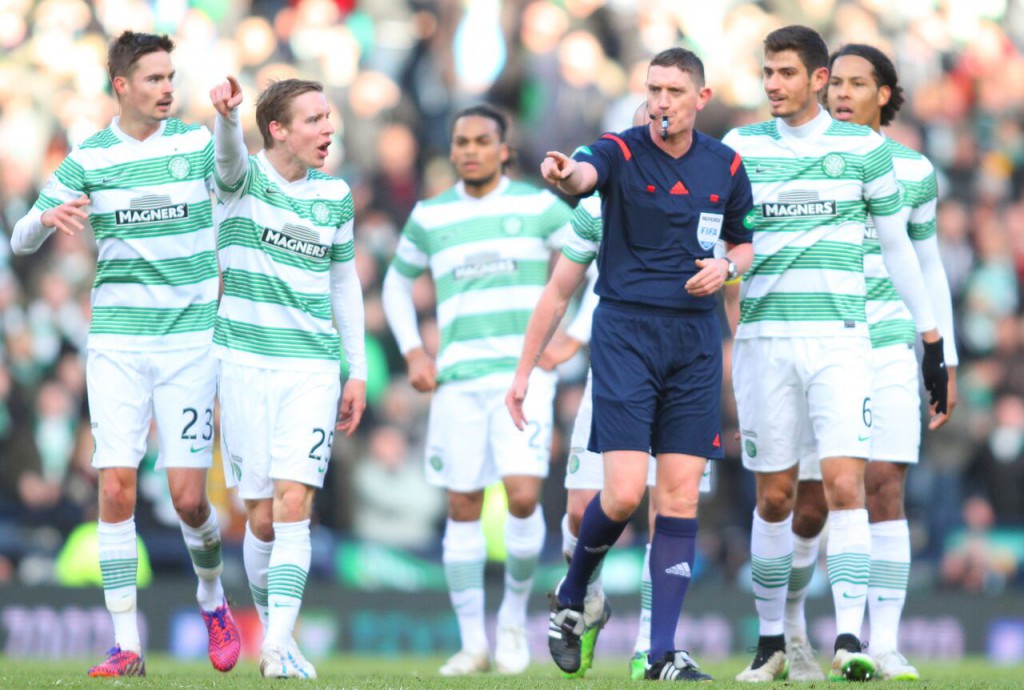 Thomson awarded a penalty-kick for the offence – and Griffiths scored – but only flashed a yellow card at the Dons defender and the Hoops hitman believed it should have been red.
Thomson also did all he could in the semi final last season to keep down the score as Celtic played out a very comfortable 2-0 win over the lower league opponents, playing in their first ever semi final and their first ever match against Celtic.
Such was the excitement among the lower league followers, their three  year old club issued a T shirt proclaiming their arrival at Hampden to play for the first time in a major semi final.
They had zero shots on the Celtic goal.
Steven McLean, no stranger to Celtic supporters, will handle the Hibs v St Johnstone semi-final at Tynecastle the previous afternoon.
The match official made the unbelievable decision to deny the Hoops a certain penalty-kick in last season’s Scottish Cup semi-final against Inverness Caley Thistle.
With Ronny Deila’s side already a goal ahead after a superb free-kick from Virgil van Dijk, a header from Griffiths was netbound until it was clearly handled by defender Josh Meekings.
Remarkably, McLean, with an excellent view of the incident, waved play on. He sent off keeper Craig Gordon shortly after the interval and the Highlanders wrecked Celtic’s bid for the domestic Treble when they won 3-2 with a late goal in extra-time.
The SFA later reviewed the incident and after weighing up all the facts issued former Celtic manager with a three match ban for swearing at his television.