Celtic Quick News on News Now
You are at:Home»Latest News»THREE CHEERS FOR LENNY AND THE BHOYS
By CQN Magazine on 5th August 2020 Latest News

CELTIC will be hoping for three cheers as well as three points when they take on Kilmarnock at Rugby Park on Sunday afternoon.

Last season, the champions racked up a treble treble against Alex Dyer’s men, winning twice at Parkhead and once in Ayrshire, coincidentally all by the same 3-1 scoreline.

Two goals from Sunday’s hat-trick hero Odsonne Edouard and a single from Ryan Christie got the ball rolling in the east end of Glasgow in September and the Frenchman was on the mark again in the away game in January with Leigh Griffiths and Christopher Jullien joining in.

Edouard and Griffiths also featured in the triumph at Parkhead in February with Kristoffer Ajer also getting on the scoresheet.

Neil Lennon is hoping the nine-in-a-row champions keep their sequence going in the champions’ bid for the perfect ten.

However, the gaffer has warned his players they will have to battle for all they get on this occasion.

Lennon, speaking to The Celtic View, said: “Kilmarnock have been a great story over the past couple of years. There has been a bit of transition with the playing staff. I know Alex very well, he’s a very good manager, a great coach and Kilmarnock away has always been tough. 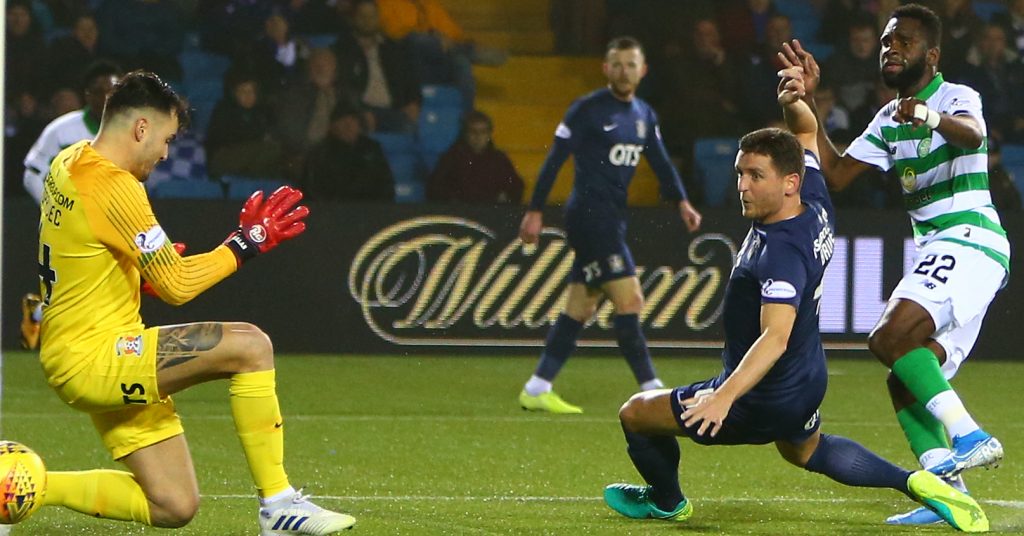 THREE’N’EASY…Odsonne Edouard scores one of his goals against Kilmarnock last season.

“We’ll have to adapt accordingly to the conditions,. It’s good to have a week to prepare for it, so we’ll get a bit of rest and, come midweek, we’ll be really focused again on what we need to do.

“We had a good result at Rugby Park back in January, we played really well and we had to. I think this game will be no different. We’ll focus our minds, we’ll play to the conditions and will handle the opposition as we need to.”

Reflecting on the victory over Hamilton Accies on Flag Day, Lennon added: “I’m delighted with how they responded at half-time, I’m really, really pleased. At times, when you’ve been away from the game for a while, you can be a bit lethargic.

“We talk about a second wind, where your legs are a bit heavy and then they come again and I think we experienced that on Sunday.

“Getting that match rhythm, getting our legs going again, that was a real plus point from the game, as well. We looked good, playing with intent and pace and power.

“I wouldn’t say we played tentatively in the first-half, but maybe playing a little too safe, playing their way into the game. Defensively, we could have done a little bit better, but in the second-half we tidied that right up.”

*This week’s Celtic View is on sale now.