SCOTT BROWN had three cheers for a trio of team-mates after Celtic’s impressive 3-0 victory over Hibs at Parkhead yesterday.

Brown was quick to announce his admiration of the assortment of Dutch, Scottish and Swiss skills and qualities. Here is the 35-year-old’s assessments as told to the Daily Record.

“He’s fantastic, he’s got a great attitude and is always willing to learn. He is in meetings with the gaffer and the backroom staff, as well, because he wants to always get better,

“His energy and ability is second to none, he is one of the quickest I’ve seen and he’s got composure with the ball, as well.”

Asked how far Frimpong can go in the game, Brown added: “Really far up that wing and really quick because I can’t catch him!”

PASS MASTER…David Turnbull knocks the ball into the path of Mohamed Elyounoussi. 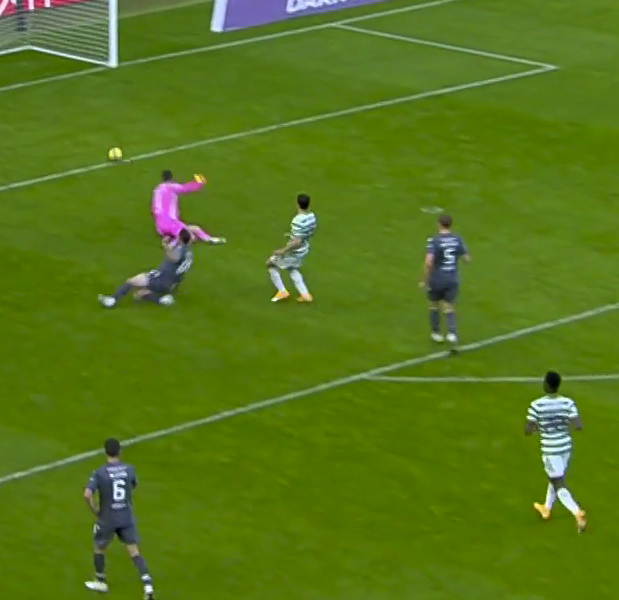 JOB DONE…Mohamed Elyounoussi slips the ball past Ofir Marciano for the third goal.

“He’s calm, he’s composed on the ball and he sees a forward pass, too. He’s also got great awareness, so for us it’s great to have another Scottish boy in the team.

“He knows what it’s all about also, winning games for Celtic and how big a club this is.”

“It’s just frustrating he’s got injured, especially when he’s just been getting into the groove. We’re fortunate we’ve got great players in attack.

“We’ve got Griff ready to come back too and the squad’s in a good place just now. I’m sure Ajeti will want to come back as quickly as possible.

“It’s about being in the right spot at the right time and he’s got that. Ajeti has got that awareness and we’ve seen it in training.

“It’s hard for new people to come in here and hit the ground running, but he really has, he’s scoring goals and his link-up play was also exceptional.”

The Switzerland international attacker snapped up his fifth Hoops goal when he steered in the second strike after Hibs keeper Ofir Marciano had pushed away a drive from Mohamed Elyounoussi.

The Norwegian international made certain of the points when he rolled in the third following a neat pass from Turnbull, bought for £3.15million from Motherwell last month.

And Frimpong, who relentlessly terrorised the Easter Road club’s left flank with some rampaging, storming touchline runs, was involved in the first for Callum McGregor in the seventh minute that paved the way for a fine performance from the champions that was rated a “10-our-ot-of-10” display by delighted gaffer Neil Lennon.

The focus switches back to Europe on Thursday when the Parkhead men step onto the tightrope again with no safety net in sight when they take on Sarajevo in Bosnia in the crucial play-off that will determine if the Hoops get into the competition’s group stages.