CELTIC were showered with praise – and prizes – in April 1969. The month was chiselled into history as one of the club’s most memorably brief and mesmeric passages of time as they swept triumphantly through a whirlwind twenty-one days to emerge victorious with all three domestic trophies – the fourth consecutive championship, the Scottish Cup and the League Cup.

Even by Celtic’s peerless standards, it was an epic achievement, a spellbinding tour de force.

Jock Stein’s dauntless collection of genuine characters were unstoppable as they charged towards unparalleled feats of grandeur which fittingly kicked off at Scotland’s national stadium on Saturday April 5 with a 6-2 League Cup Final annihilation of Hibs and came to a halt three weeks later at the same venue with a 4-0 Scottish Cup Final obliteration of Rangers.

In between the spectacular silverware successes at Hampden Park, with a combined audience in excess of 205,000 watching with tantalised fascination and appreciation – albeit grudgingly in some sections – Tommy Gemmell, football’s most cavalier of full-backs, thumped in a last-minute equaliser in an enthralling 2-2 stalemate against Kilmarnock at windswept Rugby Park on Monday April 21 and another flag, the fourth in succession and twenty-fourth in total, was heading for the east end of Glasgow.

The manager and his players had claimed their second domestic treble in three years and no-one could deny they had marked their feat with some considerable style, swagger and substance. 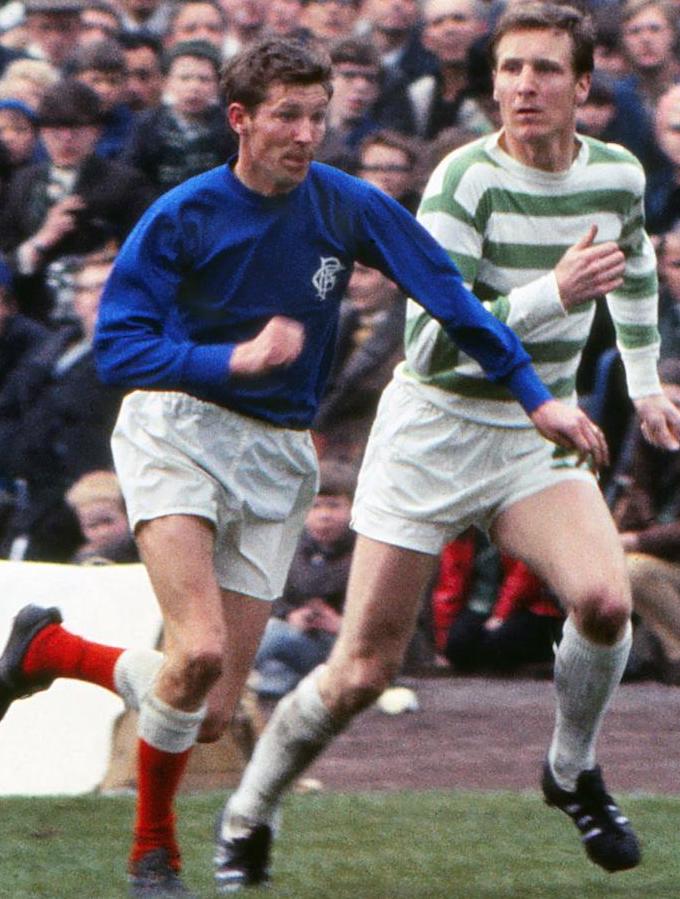 THE RACE IS ON…Billy McNeill and Rangers striker Alex Ferguson in a chase for the ball in Celtic’s 4-0 Scottish Cup Final success in 1969.

The climax to the League Cup had been postponed from its normal October date because of a fire in the stand at Hampden. Celtic and their Easter Road opponents had been forced to delay their showpiece occasion for six months. When the game eventually rolled around, the holders were merciless at a stadium awash with bright sunshine on a breezeless afternoon while Bobby Murdoch and Bertie Auld manoeuvred their way through their stunning repertoire as they produced another midfield masterclass and Bobby Lennox collected a hat-trick of goals that had become his calling card.

Willie Wallace and Wee Bertie had Celtic in command before the half-hour mark and by the time Jim Craig rolled in a rare strike in the seventy-fifth minute, Bobby had stuck three behind a bewildered Thomson Allan. Goals from Jimmy O’Rourke and Eric Stevenson in the remaining eight minutes failed to spoil the festivities.

It was a carnival crescendo as the Celtic cavalcade crossed the city once more three weeks later when the Scottish Cup was collected with another unrelenting, devastating display that had Rangers reeling groggily towards submission before the interval with Stein’s team three goals ahead through Billy McNeill, Bobby Lennox and George Connelly.

The wily Stevie Chalmers put the Ibrox side out of their misery with a fourth goal in a second-half in which the men in green and white hoops had exultantly gone through their party pieces.

CRASH…Tommy Gemmell thumps in Celtic’s title winner against Kilmarnock in a 2-2 draw at Rugby Park.

CELEBRATIONS…Tommy Gemmell leads the joy parade as another flag heads for Parkhead.

Five days before the Hoops strutted their stuff in the south side of the city, they had toiled against a spirited Kilmarnock team in Ayrshire in their third last league game of the campaign. After half-an-hour they were two goals adrift and that remained the situation following over an hour of huffing and puffing.

Celtic, though, were a team that could always be relied upon to fight their corner when questions were asked. In the sixty-third minute, Bobby Murdoch, so adept at carving opening the meanest of rearguards, attempted to flight a cross into the danger zone for his lurking team-mates.

Defender Frank Beattie, as he had done so often that evening, rose with impeccable timing to get his head to the ball, but, on this occasion, his clearance was wayward and hurtled beyond the stunned McLaughlin, who, until that point, had repelled every Celtic onslaught.

The fourth successive flag was a teasing twenty-seven minutes away. Green and white waves clattered off the all-blue defensive barrier as Celtic went for the knock-out punch.

In the ninetieth minute, Tommy Gemmell, so often the spontaneous hero, drove forward into attack in the old inside-left position as a ball was pitched over from the opposite flank. It duly arrived and the magisterial defender, without the merest hint of hesitation, applied a dunt with his mighty right foot and his effort left the scarlet-clad keeper motionless as it whipped in low at his right-hand post.

The visiting players rushed around with hands aloft in joyous celebration as Gemmell rose and punched the air with his right fist. The fourth consecutive championship was in the bag. There were a few pedants who persisted with the notion Celtic could still be caught if they had disastrous results against Morton and Dundee in their remaining two fixtures.

“That was as likely as Frank Sinatra retiring,” laughed Big Tommy. Back in the day, I was well aware of my big mate’s admiration of the crooner, so no further explanation was required.