DICK ADVOCAAT, the squat Dutchman who rejoiced in the title ‘The Little General’, strutted to the away dug-out at Parkhead on August 27 2000. He was about to witness his side being turned over 6-2 in the confrontation that was labelled Demolition Derby.

It was the day Martin O’Neill’s renascent Celtic team exploded from the shadows and proved they would not be the walkover they had been for the previous couple of years.

It took Chris Sutton a mere fifty-one seconds to give the home side the advantage in a gleefully lop-sided encounter that saw the Ibrox team mercilessly and ruthlessly exposed while being bulldozed by a well-primed unit. The first goal arrived before the confrontation had ticked beyond a minute.

Lubomir Moravcik sent in a left-wing corner that was headed down by Alan Stubbs. Henrik Larsson miscued smack in front of goal and the ball ran on to Sutton, lurking at the far post, and the striker rammed the ball home from two yards. The party had started early. Astoundingly, Celtic were three goals to the good by the eleventh minute through a header from Stilyan Petrov.

There was a temporary reprieve for the visitors when Claudio Reyna pulled one back with a header at the back post five minutes from the turnaround. In the fiftieth minute, Larsson scored one of his most memorable goals for Celtic. Jonathan Gould punted the ball downfield and it was knocked to the Swede by Sutton. The svelte Swede took the pass in his stride, nonchalantly bamboozled Bert Konterman with some nifty footwork, slipped the ball through his tangled legs and then audaciously chipped the flapping Klos from the edge of the penalty area.

Five minutes later, with the action simply pulsating, Billy Dodds slotted in a penalty-kick, but it was negated again by Larsson as he rose to a Bobby Petta free-kick to glance a header into the keeper’s top right-hand corner. With a minute to go, Stephane Mahe flashed over a cross from the left and Sutton finished what he had started by sliding in to touch the ball over the line for number six.

Amid the chaos and the carnage suffered by the Ibrox side, manager Dick Advocaat said sportingly: “Quite simply, we have to give the credit to Celtic. The scoreline doesn’t lie and they deserved to win.”

The championship – the thirty-seventh in the club’s history – was delivered on Sunday, April 7 in front of a crowd of 60,440, the biggest in Scotland throughout the season. There were five games still to go when St Mirren turned up in the east end of Glasgow in the forlorn hope of postponing Flag Day and the crowning of new champions.

Johan Mjallby and Alan Thompson hit the woodwork, Henrik Larsson proved he was human by fluffing his final effort with just keeper Ludovic Roy to beat and a variety of other efforts flew high and wide. It was left to Tommy Johnson to snatch the glory goal seven minutes from the interval. 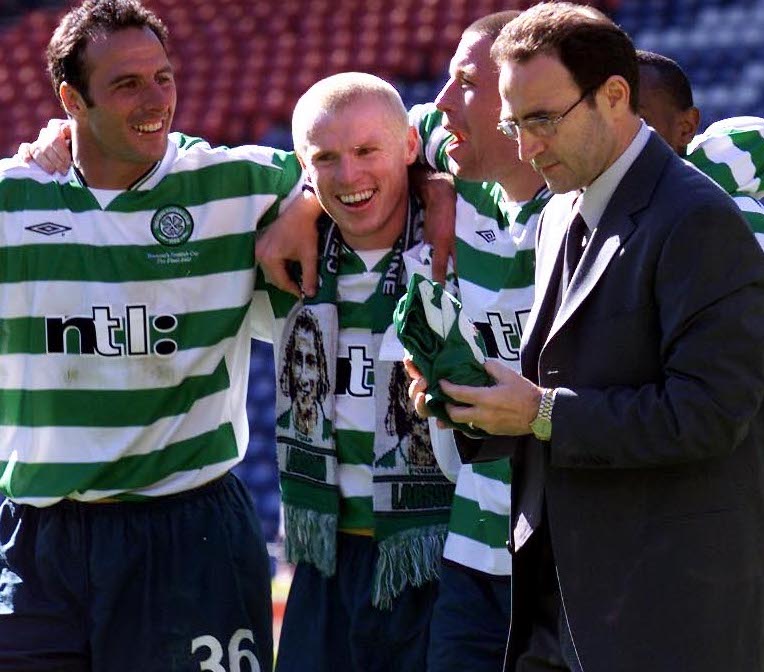 HAMPDEN HOORAYS…Martin O’Neill with with Ramon Vega, Neil Lennon and Alan Thompson after the 3-0 Scottish Cup Final win over Hibs.

Hibs barred their way to the milestone, the Edinburgh side lying in wait after reaching the Scottish Cup Final which would bring down the season’s curtain at the national stadium on May 26. Henrik Larsson fired in a double after Jackie McNamara, an early replacement for the limping Lubo Moravcik, had got the ball rolling to record a successive three-goal Hampden showpiece celebration.

A delighted Larsson beamed: “We won the league early, then the CIS Insurance Cup and everyone had been going on about the treble and how much it would mean to the club. Now we can talk about it, Now there are no problems. This was the one I hadn’t won yet in Scotland. However, I’ve won it today and I’m very, very pleased.

“The second goal gave us a bit more breathing space and then we could sit back a little bit and try to pick them off. When we got the penalty-kick that was it finished.”