BRENDAN RODGERS replaced Norwegian Ronny Deila in the summer of 2016 to kick off Celtic’s unbeatable and unstoppable silverware crusade.

The Irishman followed in the footsteps of Jock Stein and Martin O’Neill as a Hoops manager to lead the club to total domination of Scottish football.

To get the ball rolling, we will focus on the breaththrough feat by Stein’s all-conquering Hoops side that triumphed in every competition – including the prized European Cup – in an outstanding season.

AN instant reward for Brendan Rodgers was the delivery of the League Cup trophy, won with a flourish and considerable style against Aberdeen at Hampden on the Sunday afternoon of November 27, 2016 with goals from Tom Rogic, James Forrest and Moussa Dembele, from the penalty spot. Celtic had gone through the competition without Craig Gordon being required to retrieve the ball from his net.

Rodgers cradled his first silverware as Celtic manager and exclaimed: “I am delighted for the football club. It’s about six months and a week since I came in. We talked about what we wanted to achieve and how we wanted to do it. We are certainly well on our way to doing that.”

Before that success, of course, there had been the tantalising encounter with the newly-promoted team from Ibrox in the fourth Premiership game of the season at Celtic Park on September 10. Memories of past meetings with Rangers could still stir old emotions. Deservedly, they had been punished for illegal financial dealings, but, in their latest guise, they had worked their way back to the top flight. There had been some supremely imbecilic comments emanating across the city that four of Celtic’s titles shouldn’t really count because the Govan outfit had not been in the vicinity to present a challenge for the flag.

Upstarts are always best put in their place fairly swiftly, so Moussa Dembele scored the perfect hat-trick – one with the left foot, one with the right and one with the head – to send them hurtling to a 5-1 humiliation. They were back in familiar territory of looking up at Celtic for the remainder of the campaign. 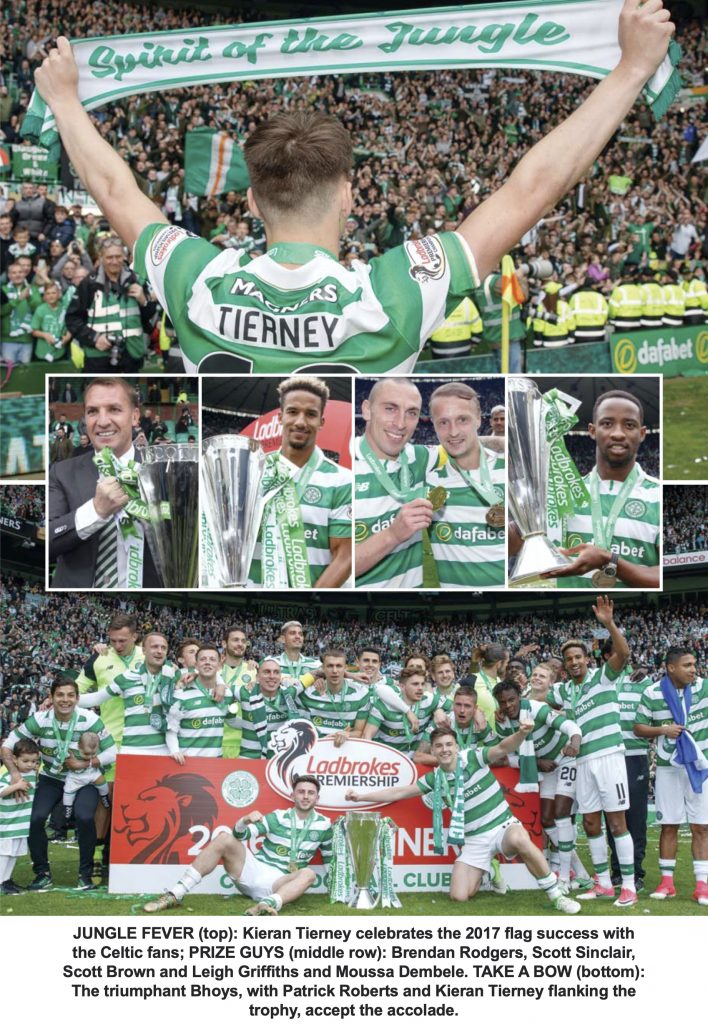 The French striker, who was starting in place of the injured Leigh Griffiths, ran amok as the opposition collapsed and Stuart Armstrong and Scott Sinclair joined in the goal parade which left the 60,000 supporters at the game and the millions watching worldwide on satellite TV with a question: How did Celtic only score five goals?

A grinning Brendan Rodgers said: “That’s why it’s one of the greatest games, if not the greatest derby in the world. It was a brilliant performance from ourselves and a great result. A lot of these boys, as a squad, have travelled over 60,000 miles across the international break, so to come back in here and play at that level and be that clinical, was a joy to see.

“You always think optimistically and I think the thing was about the three points. It does make it sweet when you play that well and with that intensity and concentration, so it was a very good performance.”

A Scott Sinclair hat-trick in a runaway 5-0 victory over Hearts at Tynecastle on April 2 2017 handed the team the championship with eight games still to play. The six-in-a-row champions won thirty-four and drew four of their thirty-eight matches. They also set a new club landmark of 106 points. 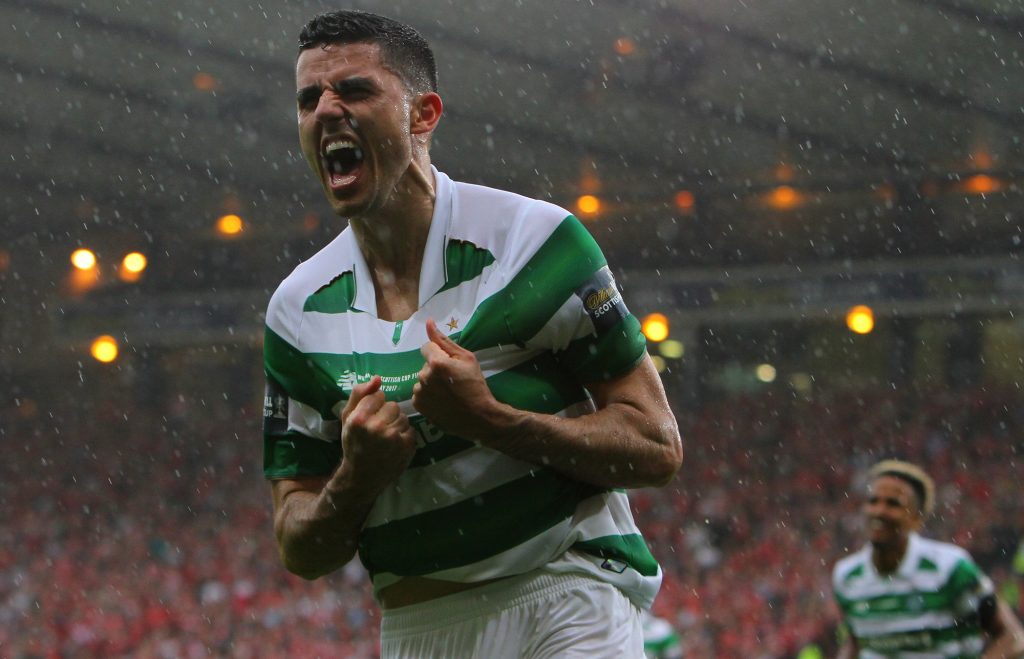 WIZARD OF OZ…Tom Rogic races away in joy after his Hampden winner.

Celtic would bring down the season on a momentous season with a Scottish Cup Final meeting with Aberdeen at Hampden on May 27. They had booked their place with a 2-0 win over Rangers in the semi-final where Callum McGregor and Scott Sinclair scored the goals that swatted aside the lame Ibrox side and their new manager Pedro Caixinha, the Portuguese coach who had replaced Englishman Mark Warburton.

A dramatic 2016/17 campaign was edging to a shuddering climax with Celtic and Aberdeen locked at 1-1 in the Scottish Cup Final on a day of crazy changeable weather conditions in Mount Florida on the Saturday afternoon of May 27, 2017.

The champions had been rocked when the Pittodrie outfit had taken the lead through an effort from Jonny Hayes, but, thankfully, Stuart Armstrong had the perfect response with the leveller just over a minute later, a low left-foot drive from the edge of the box that whipped beyond the diving Joe Lewis.

Two minutes into stoppage time, the scoreline hadn’t changed – until a moment of magic from the man known as the Wizard of Oz, Tom Rogic. No danger threatened as he picked up a pass from Stuart Armstrong and ambled forward. There was a spurt of acceleration to leave Anthony O’Connor in his slipstream.

Menacingly, Rogic carried into the penalty area, a shimmy one way and then another bamboozled Andy Considine before the Aussie playmaker spotted a space between the keeper and his near post. With a nonchalant sweep of his right foot he tucked the ball sweetly into the net.