And it’s the THIRD time the Hoops playmaker has been on the receiving end of some strange decision-making by authorities in recent months.

ONE: Christie was deemed by the SFA compliance officer Clare Whyte and her three-man committee to be guilty of violent conduct in his non-event incident with Alfredo Morelos in the December encounter at Parkhead. That brought an immediate two-game ban with another tagged on with his red card against Livingston in October taken into consideration.

TWO: In the Danish capital, following a mid-air clash with an opponent, he was adjudged to have handled the ball after the intervention of the video-assisted referee. At the time, Russian referee Sergei Karasev waved play on before being alerted to the possibility of a penalty-kick. After checking the touchline monitor, he pointed to the spot.

THREE: Even worse was to come for the Scotland international when the match official produced a yellow card for the “offence” and that means the player will be banned for the return leg against the Danes at Parkhead on Thursday night. 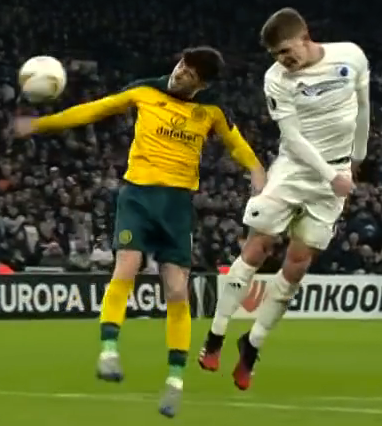 HAND IT TO THEM…the ball strikes Ryan Christie to bring VAR into action.

Christie admitted he had no complaints with the whistler’s decision to penalise his handball – but insisted the video ref should have been summoned for the Copenhagen equaliser as he claimed there was an illegal use of the hand in the build-up to Dame N’Doye’s goal.

And the mystified midfielder insisted it didn’t warrant a booking because it was clearly not deliberate.

Goalkeeping colossus Fraser Forster saved his team-mate’s blushes with a dramatic swoop to his right to push Jens Stage’s well-drilled spot-kick onto the right-hand upright and it was eventually smuggled clear.

Looking at the lead-up at the left-wing corner-kick that created the historic incident, Christie, speaking to the Daily Record, said: “You’re desperate for your player not to score, so I was doing as much as I could. I’m honest enough to say it hit my hand, it’s a handball and if the referee thinks I’m stopping a goal he’s got the right to give it.

“The frustrating thing is to get the yellow card afterwards.

“I don’t know what the rule is, but I’ve been booked for a deliberate handball and I think everyone can see it’s definitely not deliberate, I was just using my arms to jump.

“It’s a shame that I have to miss the second leg, yet again getting suspension for something I don’t think’s right.

“I knew it had hit my hand and it came down to whether he interpreted that as deliberate. I’ve been told the rules are that if it hits my hand it’s a penalty.

“But there was a handball in the build-up to their goal which wasn’t looked at, so the consistency is the frustrating thing. Everyone speaks about VAR, but, hopefully, next week it’ll be on our side.” 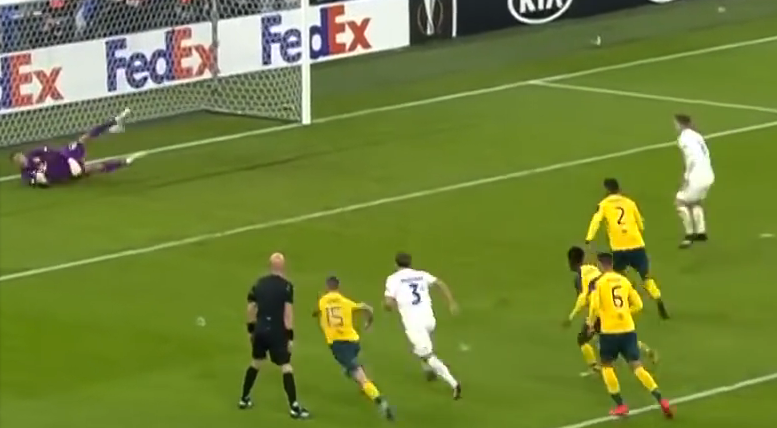 HAND IT TO ME…Fraser Forster dives to save the Danish side’s penalty-kick.

Christie admitted he’s gutted to be forced to sit out the return after coming back into Neil Lennon’s first-team plans after his three-game suspension.

He added: “Unfortunately, it’s very tough to watch. I’ve missed too many games since the start of this season, but I’ll be there supporting the boys.

“We have to take confidence of how we started and also the fact we’re playing at Celtic Park, knowing we can have a better domination of the game and dictate the tempo a bit more.

“We have a confidence coming away from home, but that’s really enhanced when we’re under the European lights at Celtic Park.

“The boys will be looking forward to that. I can’t play and help the cause, but, hopefully, the boys can see us over the line.”