CELTIC clinched the ninth title in their history exactly 113 years ago today.

It was one of the most remarkable championship successes and has gone down in club folklore with the team being forced to overcome an extraordinary obstacle course on their way to a 2-1 victory over Hamilton Accies at Douglas Park on April 30 1909.

The Hoops had won the previous four crowns and were determined to continue the sequence although they faced a daunting schedule in the countdown to silverware success.

Author Alex Gordon highlighted another glorious campaign in his tribute book, ’50 Flags Plus One’, which covers all 51 untainted titles achieved by the Parkhead club.

In another CQN EXCLUSIVE, Alex rolls back the years to detail the magnificent feat in a frantic sprint for glory.

Here is an edited chapter in his fifteenth Celtic publication for your enjoyment.

WINNING is a wonderful habit to achieve and adopt. It’s a most welcome component when you are confronted with eight games in twelve days with your ninth league championship within sight.

Couldn’t happen in the twenty-first century, of course, but that was the frenetic and improbable schedule that faced Celtic in April 1909.

The bizarre situation arose through too many Cup-ties – including replays – that meant the final month of the football season was overflowing with fixtures. The sensible solution would have been to extend the campaign. Well, you know what they say about common sense, don’t you? It’s not that common.

The Scottish League, in their infinite wisdom and showing the flexibility of a Giant Redwood Tree, were not keen to grant an extension plus contracts of many players were due to expire on the final date of the league term.

The Scottish Cup had been withheld by the Scottish Football Association following the infamous riot at Hampden on April 17 when the fans of Celtic and Rangers reacted angrily to the prospect of a third game following two draws, 2-2 in the first match and 1-1 in the replay. The supporters, mindful of the expense of another trip to the national stadium, expected extra-time to be played. Some players remained on the pitch at full-time, too, clearly believing this would be the case.

When it became obvious there would be no such addition, there were chaotic scenes. Somewhere in the labyrinth of red tape, it stated an extra period of thirty minutes would be played, but only in the event of the second replay being tied. The uproar had nothing to do with the rivalry between the sets of followers. They were united in anarchy on an unfortunate evening and unruly scenes erupted. Reports insist over one hundred people were hurt in the fall-out, fifty-four of them from the police and fire services. The stadium was damaged in the fracas and the outcome was the trophy being withdrawn for a year.

So, with this as a backdrop, maybe playing eight games in a frantic twelve-day spell didn’t appear too outrageous or nonsensical. Celtic had fallen behind in their title defence, but, because of the burden of Cup-ties, had an abundance of games in hand. Leaders Dundee had completed their thirty-four game programme with fifty points. Celtic required six points from their last four matches to retain the flag. 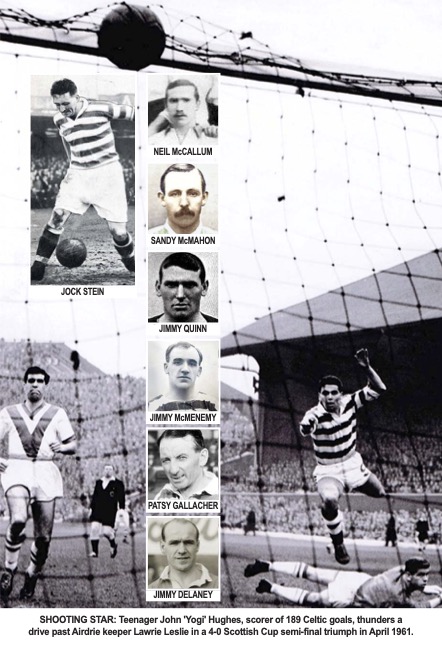 The team’s sprint for glory commenced at Tynecastle on April 19 with a 2-1 win over Hearts as Jimmy McMenemy netted a double. The players were afforded the luxury of a two-day rest before dropping an unexpected point in a 1-1 home draw against struggling Hamilton Accies, who finished third bottom, and they went into action the following day where they clicked in a 5-1 destruction of Morton at Celtic Park.

In this highly unusual climate, the club had brought in a young medical student by the name of Jack Atkinson who arrived on loan as an amateur from Hamilton Accies and made his debut twenty-four hours later on the left wing against the Greenock side. It almost goes without saying he scored two goals.

Two days later, a clearly exhausted set of players did not perform to anywhere near expectations and another point was surrendered in a 0-0 draw against Airdrie. So, with the Dens Park players kicking their last ball, Willie Maley’s men knew precisely what was required to enjoy championship success once again.

On the 26th of the month, Celtic took a giant stride forward with a 4-0 win over Motherwell as Quinn collected a hat-trick and McLean added one. Two days later, they went one better against Queen’s Park in 5-0 success where Quinn, demonstrating incredible stamina, struck another trio and McLean claimed a double.

Twenty-four hours afterwards, with the position well beyond preposterous, Celtic had to travel to Edinburgh to play Hibs on a mudheap surface at Easter Road. The home side won 1-0 and no-one was unduly surprised at the outcome.

It was all down to one game now with Celtic playing away again for the second successive day as they took on Hamilton Accies at quaint, little Douglas Park where a crowd of 6,000 turned up to see if the champions could get the win required to clinch their fifth successive flag and their ninth overall.

The players battled exhaustion and weariness against a set of players who had nothing to lose. Davie Hamilton opened the scoring for the visitors in the first forty-five minutes and Jimmy McMenemy doubled the advantage after the turnaround. There was a brief flurry from Accies when they pulled one back late in the contest.

Fortune, though, favoured the brave on this occasion when the scoreline remained unaltered as the referee blew for full-time to signal the conclusion of one of the most sensational climaxes to a season in Scottish football.

The word legends is fairly thoughtlessly and worthlessly attached to all sorts of individuals these days, but the Celtic manager and his players who manoeuvred their way through the quicksand of eight games in twelve days to win the crown surely deserve the accolade.