GORDON STRACHAN joined legends Willie Maley and Jock Stein as a manager who delivered three successive titles for Celtic at the completion of an electifying season in 2007/08.

It was a nerve-shredding climax when the championship – the Parkhead club’s forty-second crown – was won in a remarkable last-day encounter against stubborn Dundee United at Tannadice.

Author Alex Gordon captures the extraordinary drama of a thrilling climax that saw Celtic seal a memorable success in his latest book, ’50 Flags Plus One’, which is a tribute to the 51 untainted titles won by the club in their glorious history.

Here is an edited extract from the chapter in Alex’s fifteenth publication of the grand old team.

TAYSIDE was riveted with raw emotion on the evening of May 22 2008 when Gordon Strachan delivered Celtic’s forty-second championship. A thumping header from powerhouse Dutchman Jan Vennegoor of Hesselink gave the team the victory they required and so richly merited. It also brought Strachan his third successive title to emulate the achievement of club legends Willie Maley and Jock Stein.

Two days before the encounter against Dundee United at Tannadice – with the champions tied on eighty-six points with Rangers at the summit and each with one game to play – there had been the painful strain of coping with the funeral of Tommy Burns who had passed away far too young at the age of fifty-one following his courageous battle against skin cancer.

The travelling support chanted Burns’ name before, during and after the match, clearly aware that the iconic player, manager and coach had scored the winning goal that brought the championship at the same venue twenty-seven years beforehand. 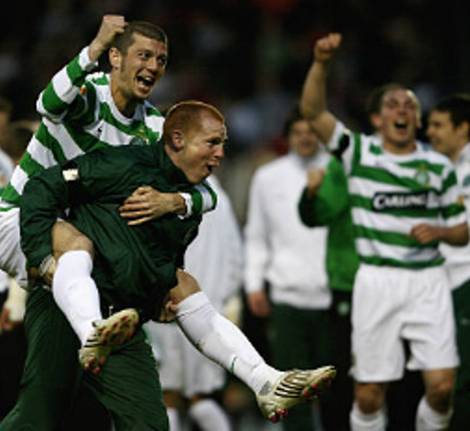 JOY BHOYS…coach Neil Lennon gives a lift to Massimo Donati while Scott Brown whoops it up.

The thirty-eighth league game would bring to a conclusion a nine-month campaign that had seen two of football’s greatest rivals engaged in an intriguing and nerve-gnawing neck-and-neck pursuit for the silverware with the finishing line now in plain sight. It had been widely anticipated goal difference would be required to settle the issue. Celtic were four goals to the good while Rangers were aware what was required against Aberdeen at Pittodrie.

With some seventy miles between the grounds, a helicopter had been required to hover overhead with the trophy. Celtic had been involved in an identical scenario in the not-too-distant past. That particular high-wire experience hadn’t ended well.

With forty-five minutes of the league season to play, both games were balanced at 0-0. Eighteen minutes into the second-half, a yell of sheer delirium bellowed from the Celtic supporters; news had been relayed Lee Miller had just put the Dons ahead. It was pandemonium as anxiety was exploded and relieved fans danced and chanted while their favourites attempted to concentrate on what was in front of them.

But there was a tell-tale quick jig from Strachan on the touchline and a punch of the air from former skipper Neil Lennon, back where he belonged as a coach.

In the seventy-second minute, Paul Hartley swirled in a corner from the left with measured perfection. Jan Vennegoor of Hesselink’s timing of his sprint into the danger zone and his leap above friend and foe were equally immaculate. The ball crashed off his forehead from six yards smack in front of goal and the whizzing sphere bulged the net behind a petrified Lukasz Zaluska. The destination of the title – and the helicopter – was never in doubt from that precise moment.

Tannadice was engulfed in joyous ferment and there was more bedlam when it became known Darren Mackie had thrashed in a second goal for Aberdeen. History has an uncanny and often infuriating way of repeating itself. Not on this occasion or this evening, though

Before a ball had been kicked in anger, the summer hadn’t been quite so frenzied on the transfer front as Gordon Strachan sought to strengthen a playing squad that had contained sufficient quality to annex a second successive Premier League crown and qualify for the last 16 of the Champions League for the first time in the club’s history, a feat beyond the scope of Martin O’Neill with greater financial resources at his disposal. 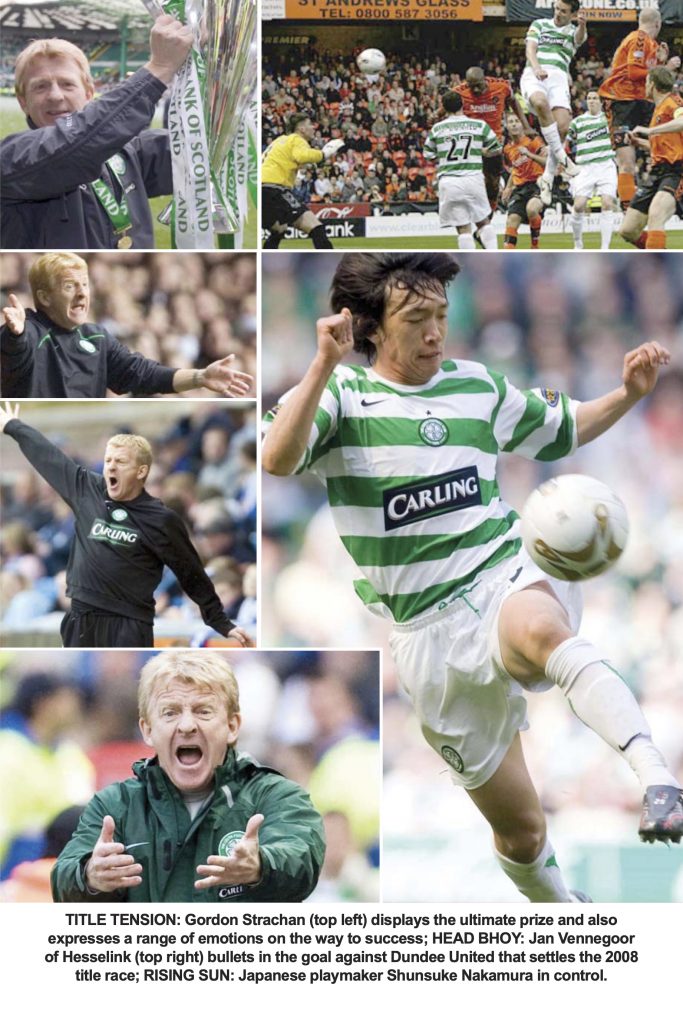 Scott Brown had already agreed his £4.4million move from Hibs and Scott McDonald was also on his way after Motherwell had accepted a £700,000 pre-contract offer in March. It was an intriguing transfer on so many levels with the Australian largely responsible for the title being whipped out of Celtic’s grasp on the notorious Black Sunday and handed to Rangers after his two-goal burst in the fading moments of the final game at Fir Park in season 2004/05. The Ibrox side had offered £350,000 for the striker in January, but the Lanarkshire side weren’t tempted at that price.

Joining at the same time was New Zealander Chris Killen, a tall, powerful frontman, who had quit Hibs at the end of his contract and agreed a three-year deal with the champions. Strachan added to his midfield pool with the £3million purchase of Massimo Donati from AC Milan.

There had been another exodus of players with Neil Lennon ending his seven-year association with the club with a move to Nottingham Forest. However, he would return in a coaching capacity before the end of the campaign. 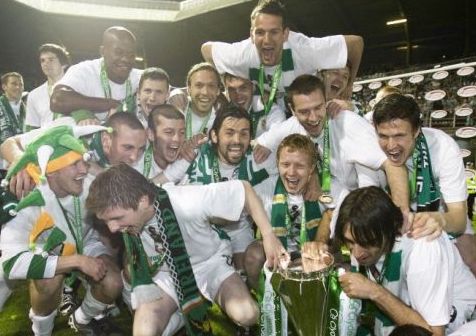 The Northern Ireland international skipper’s midfield sidekick Alan Thompson joined Leeds United. During the campaign others would leave. Kenny Miller, frustrated at the lack of first team opportunities, was offloaded to Derby County in exchange for £3million and keeper David Marshall, completely eclipsed by Artur Boruc, made a £1million switch to Norwich City.

Craig Beattie also headed across the border in a £1.25million deal to West Brom, Jiri Jarosik went further afield to Krylia Sovetov Samara in Russia for £750,000 and a bid of slightly less was enough to persuade Strachan to part with Maciej Zurawski to Greek outfit Larissa. Thomas Gravesen, old “Mad Dog” himself, went to Everton on loan.

Deep in the background, there had been rumbles of English top-flight sides taking an interest in what Gordon Strachan was accomplishing in Glasgow. Like Martin O’Neill before him, the Celtic manager had a solid reputation across the border, most notably at Southampton where he had guided the unfashionable south coast side to the FA Cup Final in 2003 where they lost to a solitary goal from Arsenal’s Robert Pires.

The possessors of envious eyes were wasting their time. Strachan was committed to the Celtic cause and was determined to continue to make progress.

The eventful Premier League 2007/08 odyssey came to a tumultuous and momentous grand finale at Tannadice.

As the players and fans celebrated Celtic’s forty-second championship, Gordon Strachan drew breath and summed up: “I’m with a bunch of guys who believed in me and I believed in them. I really do believe this is one the most satisfying nights of my life.”