The Hoops forwards failed to force the opposing keeper to pick the ball out of his net again in the 0-0 deadlock in Edinburgh after the 2-0 Europa Conference League exit in Norway.

Three hours without a solitary goal and neither Joshua Smits nor Matt Macey exactly overworked in both matches was not in the script at this crucial stage of the campaign.

Ange Postecoglou’s men blew the opportunity to go six points ahead of Giovanni van Bronckhorst’s team and there were fears the advantage would be cut to one when their nearest challengers went in 2-0 ahead against Motherwell later in the day.

However, a spirited second-half fightback by the Fir Park club, with Celtic loanee Liam Shaw playing his part, levelled the scoreline at 2-2 and the Parkhead lead remained at three points with St Mirren due in the east end of Glasgow on Wednesday. 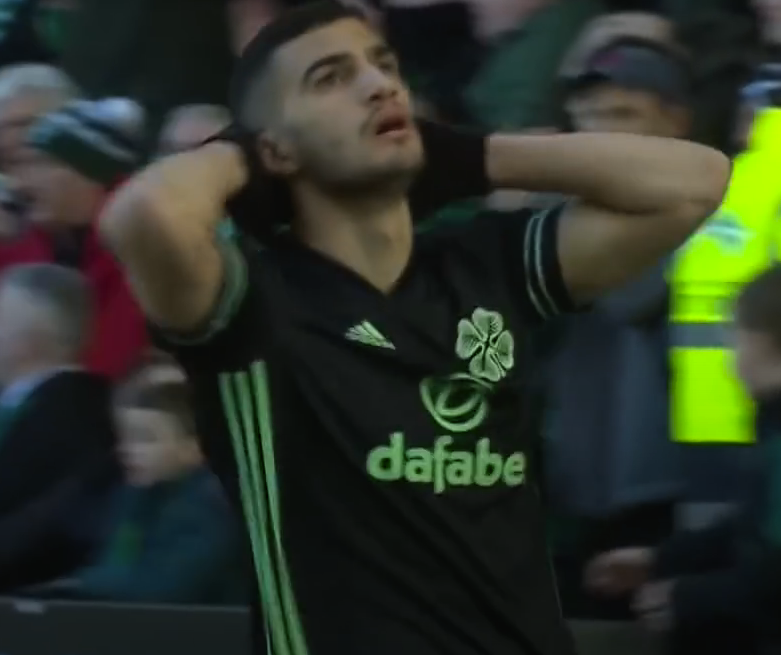 In October, Postecoglou purred on the touchline as his players swept to a 3-1 success in Leith with three early goals from Anthony Ralston, Cameron Carter-Vickers and Kyogo Furuhashi.

However, there was no such luxury on this occasion as the visitors failed to click in front of goal with Liel Abada passing up the best chance of the afternoon with a tame shot into the sidenet after he had been set free with a glorious diagonal pass from Filipe Jota in the 14th minute.

Skipper Callum McGregor, though, is adamant title tension is NOT getting through to his team-mates.

The Scotland international anchorman, one of the rare successes against Shaun Maloney’s battlers, insisted: “Obviously, when you get a bad performance and bad result during the week and you follow that up with a draw at the weekend, then, automatically, that’s what people will go to, that there’s nerves in the game, but that’s not the case.

“I think we did enough and the players have been fantastic. We have to trust ourselves and stay on the track that we are on.

“All we can do is focus on what we are doing. It wasn’t so long ago we were six points behind and you have to win and win.

“You can’t affect what goes on outside of your own building. All you can affect is what you are trying to do. Do the right things, try to get better and have calmness and an assurance that what we are doing is working. 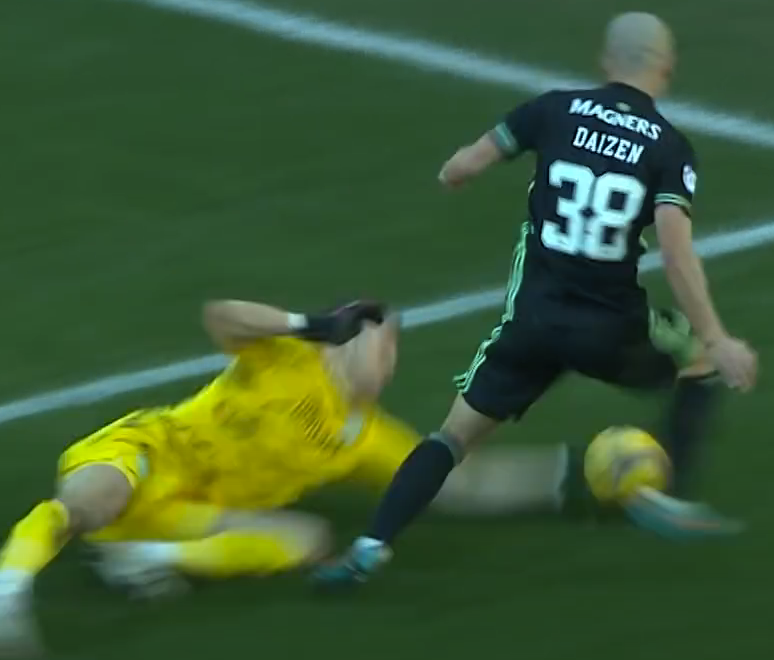 PUSH OFF…Daizen Maeda is robbed of the ball after a late swoop from Hibs keeper Matt Macey.

“We didn’t get what we deserved out of this game. But there will be to and fro between now and the end of the season, I’m sure of it.

“There are still 10 games to go, so there’s three-quarters of the season done and the boys have been fantastic until now.

“So stay calm and be focused. Keep doing what we are doing and I think we’ll get there.”

McGregor, speaking to the Daily Record, added: “I thought we were like ourselves and did enough to win. I don’t see tiredness within the group.

“The manager has chopped and changed recently, which should help us going into the latter part of the season.

“We did the things the manager asked us to and sometimes it just doesn’t fall for you. You have to try and not overthink it, as well. The boys have been excellent so far.

“A lot of them have put in a lot of good performances over the piece, so we stay calm and trust the process.

BY THE RIGHT…Reo Hatate fires in a cross that was deflected to safety by the Hibs defence.

“If you play like that most weeks, you’ll come out with enough points.

“We are now dominating games to the point where teams are completely changing their tactics against us. That’s a positive in itself.

“We just need to fine-tune the little bits and be clinical when we get in there.

“The group has done ever so well to get us to this position, so we have to stay calm and trust each other, trust the process and what the manager is asking us to do.

“I think there was enough in the game, chances, possession control, we limited them to very little in the game, as well.

“Sometimes in football, it has a funny way that you don’t get what you deserve out of a game, so we have to accept that and accept the result is not what we wanted.