EXACTLY five years ago, Patrick Roberts was firing in a double salvo to help Celtic clinch their fifth successive title.

This afternoon, the Hoops’ fans’ favourite will be trying to save Derby County from relegation to the English League’s third tier.

It’s an extraordinary about-turn in the fortunes of the winger who spent two and a half years on loan from Manchester City at Parkhead and won the hearts of the support who were desperate for the club to make the move permanent.

However, a financial agreement could not be reached and Roberts had an ill-fated temporary transfer at Spanish outfit Girona before returning to Pep Guardiola’s side. The tricky touchline performer failed to make the breakthrough at the Champions League finalists and also had back-to-back spells at Middlesbrough and Norwich City.

Wayne Rooney took him to Pride Park in January this year, but the club are now on the brink of relegation following a disastrous run of six successive defeats and a loss at home to Sheffield Wednesday today will see them collapse through the relegation trapdoor to Division One.

The strugglers, with ex-Celtic keeper David Marshall losing his first team place in recent weeks, are under extreme pressure as they step onto the relegation tightrope today.

However, five seasons ago, it was an entirely different tale for the 24-year-old star who continues to be linked with returns to the Hoops.

Roberts stepped into the spotlight on May 8 2016 in the east end of Glasgow when Derek McInnes’ stubborn Aberdeen provided the opposition, standing between Ronny Deila and the club in their quest to continue domestic domination. 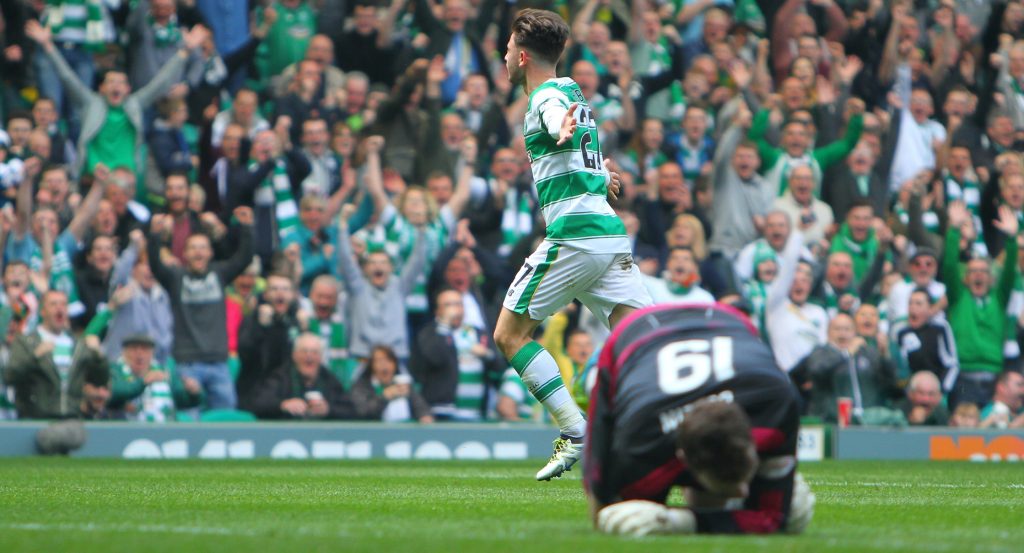 FLAG HAPPY…marksman Patrick Roberts races to celebrate with the fans after his second goal against Aberdeen on the title-winning May day in 2016.

Author Alex Gordon details another momentous episode in the club’s history in his latest tribute publication, ‘Celtic: 50 Flags Plus One’, in which he looks in detail at all fifty-one untainted championship successes.

In another CQN EXCLUSIVE, Alex provides an edited extract on another remarkable rollercoaster campaign in club folklore.

THE club’s forty-seventh championship – and the fifth in succession – was duly delivered on May 8 with a 3-2 victory over Aberdeen at Parkhead. Somehow the performance summed up fairly neatly Deila’s two seasons in charge.

There was style and substance for almost an hour with Celtic coasting three goals ahead, but then the players, with little guidance from the admiral of the fleet, somehow navigated themselves into choppy waters and just managed to dock before being holed below the waterline. A victory that should have been secured by a far greater margin had become needlessly complicated. Bobby Madden’s full-time whistle had been more than welcomed by the 47,877 crowd. 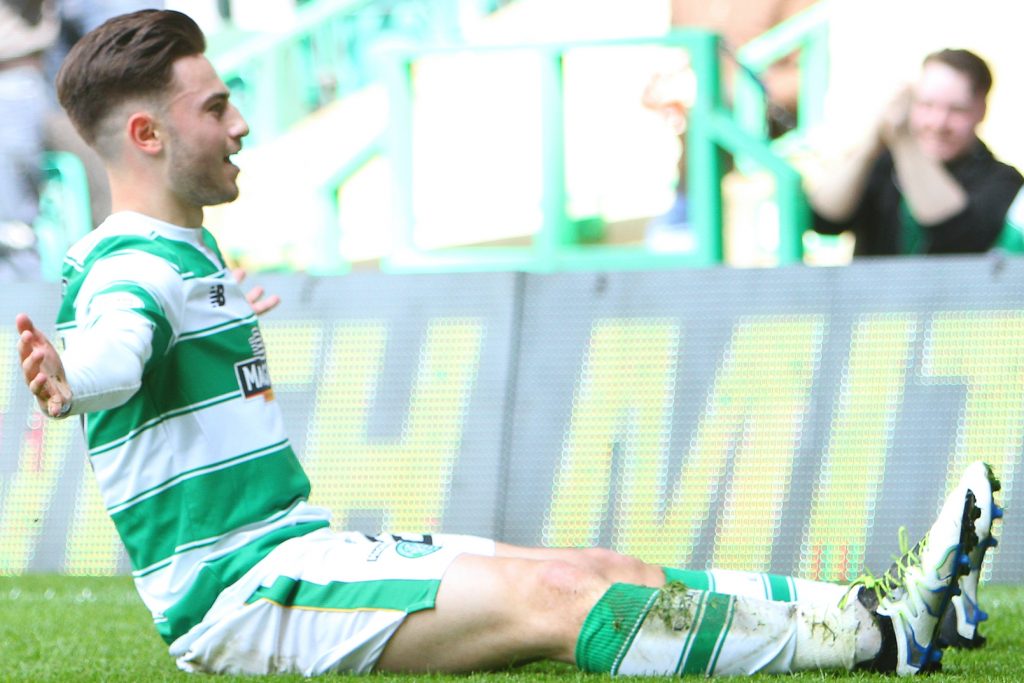 SITTING IT OUT…Patrick Roberts enjoys the acclaim of the support after his two-goal show.

Celtic were not helped by the introduction of the erratic Efe Ambrose for the injured Charlie Mulgrew and uncertainty quickly spread across the back four. Niall McGinn pulled one back in the fifty-eighth minute and the home side’s advantage was cut to one when Andy Considine netted six minutes later.

There were a few frantic scrambles in front of Craig Gordon before the conclusion and the celebrations.