Celtic Quick News on News Now
You are at:Home»Football Matters»TOM BOYD BACKS GRIFFITHS TO HIT 40
By CQN Magazine on 17th February 2016 Football Matters
CELTIC legend Tom Boyd believes Leigh Griffiths can hit the 40-goal mark this season.
The on-fire attacker claimed his 30th strike of the campaign with the opener in the 2-0 win over Ross County at the weekend.
And former skipper Boyd, when asked about a 40-goal target for Griffiths, said: “On his current form, you wouldn’t think that is too far off, either.

“He is possibly on the best scoring run of his career.” 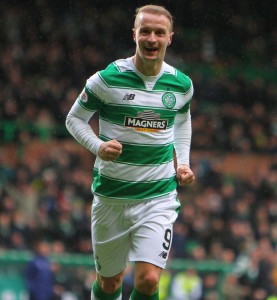 Griffiths has netted 57 goals in 92 appearances since joining the Hoops in a £1million deal from Wolves in January 2014.
Inverness Caley Thistle are next in the Scotland international’s sights when they visit Parkhead on Saturday.
The 25-year-old hitman will be looking for a different kind of hat-trick against the Highlanders after scoring singles in the champions’ wins earlier in the season, 4-2 in August and 3-1 in November.
Colin Kazim-Richards, signed from Feyenoord last month, is hoping to strike up a partnership with Griffiths in the remaining three months.
He said: “I will play alongside anyone the coach picks, but Leigh is a very good player and is scoring a lot of goals.
“Hopefully, I can make it easier for him to score and I get some goals for myself to help Celtic.”
Here are Leigh Griffiths’ 2015-16 season stats so far, courtesy of Inside The SPFL @AgentScotland on Twitter…
Starts – 31
Sub app – 6
Goals – 30
Hat-tricks – 1
Individual games – 23
First goalscorer – 14
Pens – 3
—————————————————
CQN SPECIAL OFFER!