TOMMY BURNS passed away on this date 14 years ago at the all-too-young age of 51.

In another CQN EXCLUSIVE, we publish the entire chapter of Davie Hay’s tribute to his fellow-Celtic legend which appeared in his autobiography, ‘The Quiet Assassin‘, co-authored by Alex Gordon, which was published in 2009.

Hay, former Celtic manager, player, scout and now a Club Ambassador, was a close friend of the Hoops icon. Here is his touching homage. 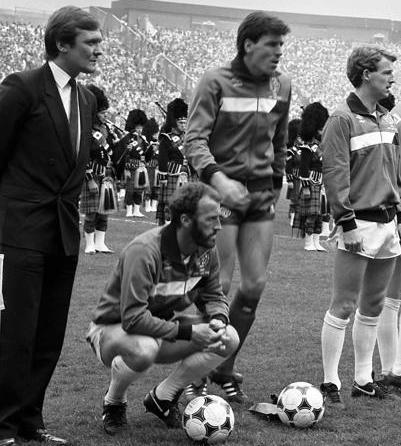 TOMMY BURNS approached me at St.Joseph’s Roman Catholic Church in Clarkston and said in a matter-of-fact manner, ‘The cancer’s back.’

There was no preamble, no warning of the information he was about impart. To passers-by, we could have been two former Celtic managers discussing the previous day’s game. How do you react to such shattering news? Tommy, of course, had already been diagnosed with the awful disease and it appeared it had gone into remission.

Now, after a chance meeting between us, Tommy had told me the news I didn’t want to hear. Sadly, one of our last meetings was at St.Cadoc’s RC Church in Newton Mearns when we were in attendance for the christening of our grandchildren, Louis and Cole.

When I looked at Tommy I saw before me an extremely courageous human being whose religion had carried him through so many obstacles in the past. Sadly, on 15 May 2008, after a brave battle, Tommy Burns succumbed to the illness. He was taken from us at the age of only fifty-one. He had so much more to contribute to life. Firstly, as a family man, a loving husband to Rosemary, a doting father to Emma, Jenna, Jonathan and Michael and a man who would have been a caring grandfather to Cole. Secondly, to all things Celtic, the club he truly loved. And, thirdly, to all of us as an inspiration.

HEAD MASTER…Tommy Burns nods in the opener in the rousing 5-0 triumph over Sporting Lisbon in 1983.

I liked Tommy a lot and it was a privilege to get to know him so well. He was a decent man and did things with a lot of style and panache. Just look at the way he played. Just recall how Celtic performed when he was manager. Everything was done with a flourish. What about that left foot? He could hit targets from all angles and ranges and it was evident even from a very early age that Tommy Burns was going to be a bit special.

I can tell you he was a 100 per cent professional when I was his Celtic manager. He had a temper, too, I seem to recall. If he didn’t agree with you, he said so. And, like a man, he said it to your face. I’ve already talked in a previous chapter about taking him off during the  1985 Scottish Cup Final while we were losing 1-0 to Dundee United. He didn’t agree with that decision and was swift to let me know as he walked past me to the substitutes’ bench.

I know he rated our 5-0 UEFA Cup triumph over Sporting Lisbon in November 1983 as his favourite European night and I have to say it is one of mine, too. Tommy gave me a lot of credit afterwards for psyching up the team before kick-off. We were trailing 2-0, of course, and I was emphasising the urgent requirement of an early goal. Actually, I didn’t have to exactly work overtime getting the players geared up for this one. With guys such as Tommy Burns around and the determination he possessed, words were often redundant.

He and the rest of the players were ready to fight their corner and I remember that being a fabulous evening of entertainment and excellent goals – one a rare header from Tommy for our first. At the end of an unforgettable and thoroughly enjoyable experience I complimented Tommy on his display. He shrugged and said: “‘I just did my bit.” You could say he was quite an unassuming kind of guy. He loved the European stage and his skills were tailor-made for this level.

It is so unfair that Celtic were not more successful than they were during his reign as boss. His classy play deserved success, but he came up against a Rangers team that was on a roll. Look at season 19995/96, for instance. Celtic lost only three domestic games – all to Rangers – and it was enough to scupper them in three competitions. 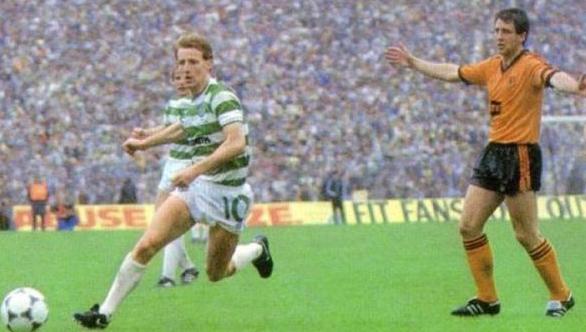 ON THE BALL…Tommy Burns in action in the 2-1 Scottish Cup Final victory over Dundee United in 1985. Ralph Milne looks impressed.

That’s unbelievably cruel. Celtic went down in the first Old Firm league encounter at Parkhead on 30 September after dominating the match for forty-four minutes in the opening half. Then Rangers full-back Alec Cleland, a guy who scored as often as we witness Haley’s Comet, went upfield, caught the defence unawares and headed past Gordon Marshall.

The second-half saw a typically determined Burns outfit throw everything at their rivals. What happened? Paul Gascoigne broke away and netted the second. It finished 2-0. The other three Glasgow derbies ended in draws, but I’m sure even Tommy might not have minded dropping a couple of points after the exhausting and exhilarating 3-3 draw at Ibrox on 19 November.

That was a Tommy Burns-type of game. It encapsulated everything he liked in football; entertaining, attacking, daring play from both sides. And there was a goal from Andreas Thom that will live forever in the memory banks of anyone lucky enough to see it. The German dynamo, another entrancing talent brought to the club by Tommy, cut it from the left and drilled an emphatic effort from outside the box past the helpless Andy Goram. At the end of the campaign, though, the league title was back in Govan and Celtic, after losing one game in thirty-six, were adrift by four points. The champions actually lost two games more, but eleven draws counted against Celtic.

The League Cup draw saw Walter Smith’s men travel across Glasgow for the quarter-final. Andy Goram was in an unbeatable mood and a high-flying save from a Paul McStay drive near the end will remain one of the most breathtaking saves I have ever seen. Celtic played well that Tuesday evening on 19 September in the east end of Glasgow, but a wee chap called Ally McCoist was to have the final say. The defence took their eye off him for a moment as a ball came in from the right and the Rangers striker got up at the far post to nod in the only goal of a tense confrontation.

Interest in the Scottish Cup ended at the semi-final stage, beaten 2-1 by Rangers at Hampden. That man McCoist got the opener when Gordon Marshall couldn’t hold a lot shot and Brian Laudrup, undoubtedly the sort of player Tommy would have welcomed in any of his line-ups, lobbed in the second. Pierre van Hooijdonk pulled one back and a great chance fell to Simon Donnelly minutes from time. Alas, from only yards out, he contrived to put the ball over the bar. Who would have blamed Tommy for giving up football forever there and then! 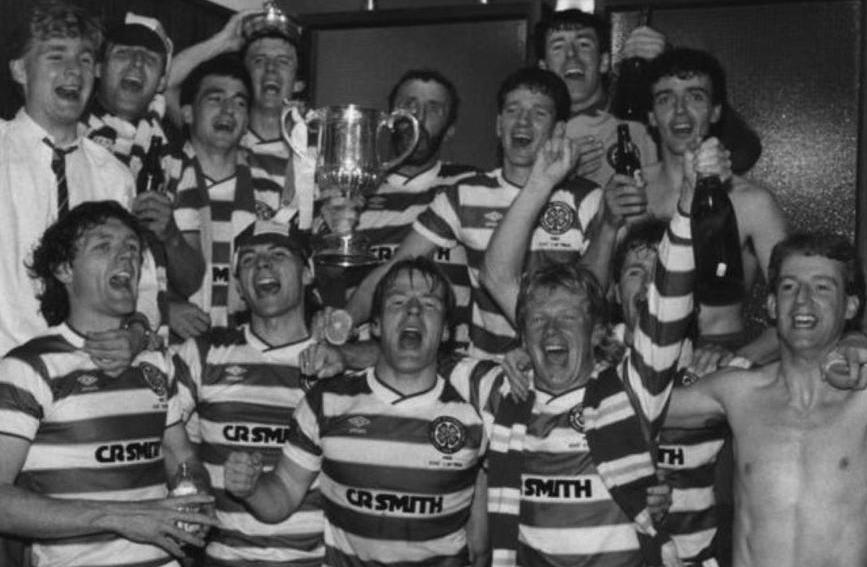 Walter Smith, after picking up a league and Cup double, won the Scottish Football Writers’ Manager of the Year award. I will always remember how he opened his acceptance speech. He said: “Thank you for this award and for all of those who voted for me.” There was a brief pause before the Rangers manager continued: “But there is another man who should be here collecting this honour – Tommy Burns.”