Celtic Quick News on News Now
You are at:Home»Exclusive Series»TOMMY CALLAGHAN: GREAT UNCAPPED CELTS (Part Six)
By CQN Magazine on 10th June 2021 Exclusive Series
CQN is turning the spotlight once again on the Celtic players who never had the honour of playing for their country.
Tommy Callaghan was Jock Stein’s third signing for the club – following Joe McBride and Willie Wallace – when he arrived from Dunfermline in 1968.
He became a key player for Big Jock and the Hoops – but was never deemed good enough to get into a Scotland international squad.
Here is Tommy’s story in another EXCLUSIVE CQN feature.
TOMMY CALLAGHAN had a superb put-down line when Bertie Auld and Co jokingly asked: “How good are you? Show us your European Cup medal.”
And Callaghan, known to his team-mates as ‘Tid’, would nonchalantly reply: “Please remember at all times, Jock Stein brought me to Celtic to STRENGTHEN the team.”
And, of course, the Cowdenbeath-born midfielder was absolutely correct in his observation. The iconic Hoops gaffer went back to his old club Dunfermline in November 1968 to sign Callaghan for £35,000 – the most Big Jock had ever paid for a player, topping the £30,000 fee to Hearts for Willie Wallace in December 1966.
Stein knew what he was getting in the unselfish, strong-running left-sided player. He rarely took the spotlight, but there was little doubt he was a player’s player. He helped out up and down the pitch and left the headlines to his team-mates. 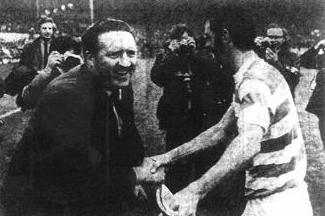 THAT’S MY BHOY…Jock Stein congratulates Tommy Callaghan after a win at Hampden.
And the wily Stein was also well aware of Callaghan’s love of all things Celtic. “When I got the opportunity, I would be on the Cowdenbeath Celtic Supporters’ Club heading for Parkhead. I was just a youngster at the time, but Celtic were my team. Signing for them was just wonderful.”
And Callaghan topped off the switch by netting an excellent goal on his debut in a 4-0 win over Partick Thistle at Firhill on November 28 – one day after Big Jock splashed the cash. Well, it was a lot of money between Scottish clubs back then.
The big-hearted performer, now 75, more than played his part in Celtic winning four league title from 1971 to 1974. Stein relied on him in major games and the player rarely, if ever, failed to respond.
Surprisingly, though, there was never the hint of a call-up to the Scotland squad. Not even the merest whisper.
Which didn’t bother Callaghan one jot as he went about playing for the club he had supported growing up in Fife.
Scotland’s loss was certainly Celtic’s gain although he did manage to squeeze in two appearances in three years for the Scottish League Select.
Okay, why is he nicknamed ‘Tid’? Simple, really. His big brother Willie also started his career with Dunfermline as a tough-tackling right-back. He was the elder by three years, so when Tommy made his appearance at East End Park he was immediately given the moniker ‘Tid’, short for ‘Tiddler’.
Who said footballers don’t possess a sense of humour?
Click Here for Comments >
Share. Twitter Facebook Google+ Pinterest LinkedIn Tumblr Email
Previous ArticleFan zones and flags
Next Article THREE CHEERS: TREBLE No.4 (2016/17)