LISBON LION Tommy Gemmell has paid tribute to Holland legend Johan Cruyff who died today at the age of 68. 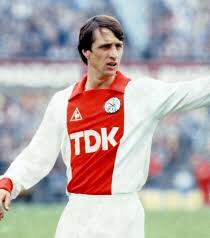 The Celtic great faced the Ajax and Barcelona superstar on a few occasions and played alongside him for a Rest Of Europe Select in a Testimonial Game for Benfica icon Mario Coluna in Lisbon in the late sixties.

Gemmell said: “I was asked to select my all-time world eleven of opponents for my autobiography, ‘All The Best’, a couple of years ago and I didn’t have to think twice about naming John Cruyff in that elite line-up.

“His was one of the first names that came to mind. If that guy had a weakness I certainly couldn’t detect it.

“He could dribble, he was strong, good in the air, could shoot, had an eye for a pass, was pacy, was fearless. Did I miss anything out?

“I played with and against him and I thought he was incomparable. If my dear old chum George Best enjoyed a snifter, that guy certainly embraced a cigarette.

“I was amazed to discover he could get through eighty to one hundred fags a day. And yet look at how fit he was. He was a phenomenon.

“Maybe I should have taken it up! To be honest, I never thought about smoking as I was growing up. As a confirmed non-smoker, I could never see the allure of shoving a weed between my lips and setting it alight.

“It didn’t do Johan much harm as a player, that’s for sure. But, of course, he went through a triple heart-bypass later on in life.

“I knew he had been diagnosed with cancer late last year, but I thought – and hoped – he had conquered the disease.

“Sadly, even the great Johan Cruyff couldn’t beat that dreaded opponent. He left us all with so many treasured memories, as a player, a manager and, of course, a wonderful human being.

“He will be missed by all and my thoughts are with his family.”