NO Celtic fan will ever forget Tommy Gemmell’s pulverising equalising goal against Inter Milan in the unforgettable European Cup Final triumph in Lisbon on May 25 1967.

The cavalier left-back was on target again three years later in the Euro showdown with Feyenoord in Milan, but, unfortunately, the Dutch came back to win 2-1 in extra-time.

However, there has never been a fuss made of his strike that claimed the fourth successive title on Jock Stein’s great side’s surge to the club’s first nine in a row from 1966 to 1974.

The championship victory was almost overshadowed as it was sandwiched in between two emphatic and spectacular Cup triumphs, but Gemmell, who passed away five years ago today in March 2017 at the age of 73, still deserves the glory for the typical whizzbang effort that kept the Hoops on course in their initial record-breaking run. It was a Monday evening, April 21 1969, against Kilmarnock at Rugby Park and the Parkhead were struggling to make an impact.

CHEERS…the legendary goalscoring left-back takes off in celebration after his late strike gave the Hoops a 2-2 draw – and a fourth successive crown.

The Celtic legend, speaking to one of his best friends Alex Gordon, told the author in his book ‘CELTIC: The Awakening‘, which was published by CQN in 2013: “We had drawn 2-2 with Airdrie at Parkhead on Saturday. I scored with a penalty-kick and Wee Bobby Lennox got the other. It hadn’t been our most memorable performance of the season.

“At that stage, we were so close to clinching our fourth successive title and possibly we were a wee bit complacent. That wasn’t like us, I must admit.

“However, we knew we could make certain of the championship when we played Kilmarnock at their place a few days later. We needed a point and I’m glad to report I got the goal that gave us a 2-2 draw and our fourth consecutive crown.

“We were 2-0 down at one stage and just couldn’t make a dent on the Killie defence. And then Frank Beattie deflected a Bobby Murdoch cross had into his own net to give us our opener, but the Ayrshire lads, as they always did against us, fought like their lives depended upon it.

“I joined the attack once again and I remember the ball sitting up nicely and begging to be hit. I wasn’t going to disappoint it. I connected and it zipped past their keeper Sandy McLaughlin low into the net.

“Job done, but we would have to put the champagne on ice with the Scottish Cup Final against Rangers due on the Saturday.”

Celtic had already beaten Hibs 6-2 in the League Cup Final earlier that month, on April 5. The game had been postponed from its original October date because of a fire in the main stand of the national stadium. 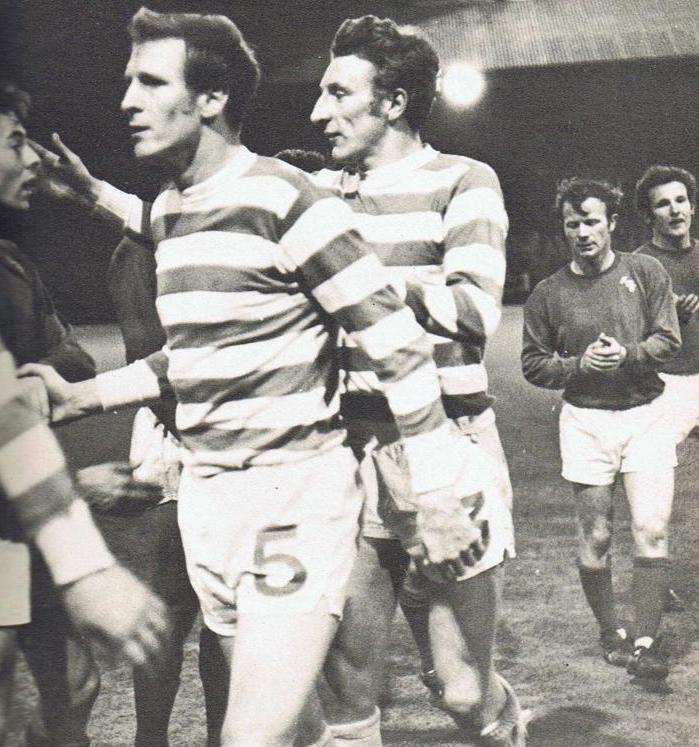 CHAMPIONS AGAIN…Billy McNeill and Tommy Gemmell are congratulated by the sporting Killie players at full-time.

Bob Shankly, brother of Liverpool’s Bill, one of Stein’s great friends, had assembled a stylish outfit that was very easy on the eye. Bobby Lennox dismantled them in a one-sided Final, netting a superb hat-trick. Bertie Auld, Willie Wallace and Jim Craig added the others.

At one stage, with Celtic leading 6-0 near the end, Stein sent on substitute John Clark for Gemmell to lap up the cheers of the support. Hibs scored twice in the fading moments and Clark laughed: “Imagine that. I was on the field for such short period of time, the opponents score two goals without reply and I pick up a winner’s medal. Great game, this football.”

On Saturday, April 26, the Hoops brought down the curtain on a fabulous season and a historic month when they hammered Rangers 4-0 in the Scottish Cup Final. Billy McNeill, Lennox and George Connelly all scored in a blistering first-half and Chalmers put an extra gloss on the scoreline after the interval.

Three trophies, one month, happy days at the Hoops!