Celtic Quick News on News Now
You are at:Home»Latest News»TOMMY v MO: ONLY ONE WINNER
By CQN Magazine on 14th April 2021 Latest News

TOMMY COYNE was Celtic’s matchwinner when Billy McNeill’s side, underdogs in the estimation of many, overcame Graeme Souness’ expensively-assembled Rangers team in the Scottish Cup quarter-final on Sunday, February 25 1990.

The Glasgow-born Republic of Ireland international striker had been forced to sit out the previous season’s silverware success at Hampden over the Ibrox outfit when Joe Miller scored the only goal of the game.

Coyne had arrived in a £500,000 switch from Dundee, but had to miss the big occasion as he was Cup-tied with the Dens Park club.

But he made up for it in front of a packed Parkhead when he slid in to knock the ball over the line from practically under the crossbar after keeper Chris Woods had touched away a low drive from Miller just before half-time.

Paul McStay had followed Roy Aitken up the famous steps at the national stadium in the previous two seasons when the trophy was being awarded following triumphs over Dundee United and Rangers and the skipper admitted: “Now that one is out of the way, we must fancy ourselves. We know we still have hard games to play, but after a result like that we are confident of going all the way.

“It would be a fantastic feeling to skipper the side to a Hampden Cup Final win.” 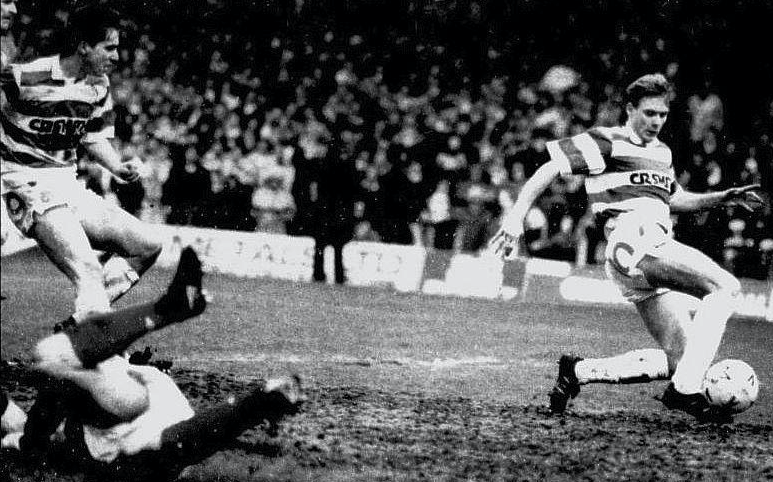 CUP WINNER…Tommy Coyne knocks in the only goal of the game with Rangers keeper Chris Woods grounded while Jackie Dziekanowski looks on.

McStay put in another accomplished performance in the middle of the park while the central defensive duo of Paul Elliott and Derek Whyte completely dominated Ally McCoist and Mo Johnston.

The former Celt, in fact, could have incurred the wrath of lenient referee Brian McGinlay with a wayward charge into the back of his ex-friend Whyte in the fading moments of the encounter as the visitors tried desperately to snatch an ill-deserved equaliser. The whistler decided to keep his cards in his pocket.

McStay added: “This win is marvellous for everyone connected with the club and especially the fans who were brilliant again. We built up perfectly for the game and any remote doubt I had that we would get a result disappeared five minutes into the match. At that point I felt we were closing them down and doing things right ourselves.

“In the event, I didn’t feel they troubled us unduly and I was delighted for Tommy Coyne when he got what proved to be the winner.”

Alas, the history books show that McStay had to wait until 1995 to be handed the Scottish Cup following Piere van Hooijdonk ‘s soaring header against Airdrie.

The Hoops failed to collect a hat-trick of successes in the national competition when Anton Rogan missed the crucial penalty-kick in the shoot-out with Aberdeen in a dramatic finale on May 12. It ended goalless after extra-time and had gone to sudden-death by the time the Northern Irishman saw his effort saved by Theo Snelders.

All eyes were on Brian Irvine who took the following spot-kick and he blasted his effort beyond the helpless Pat Bonner to take the trophy to Pittodrie on a 9-8 spot-kick scoreline.

The win over Souness, Johnston and Co still remained one of the highlights of a disappointing campaign.