Celtic Quick News on News Now
You are at:Home»Match Report»TON-UP BHOY TIERNEY AS CELTIC MAKE IT 10 OUT OF 10
By CQN Magazine on 25th February 2018 Match Report

HAIL the Celtic Centurians following a gritty, courageous performance as they made it 10 wins out of 10 against the Dons in a pulsating encounter at Pittodrie.

Kieran Tierney made certain of victory when he thrashed in the second late in the confrontation – the Hoops’ glorious 100th goal of the campaign.

The place was rocking after Mikael Lustig had been banished 15 minutes from time following two yellow cards.

Brendan Rodgers’ battlers were hanging on to a 37th-minute goal from Moussa Dembele, his fourth in six games against the same opposition this season.

And even a striker visibly low on confidence – one goal in his previous 13 games – couldn’t miss this opportunity.

James Forrest collected a slide-rule pass from Tom Rogic on the right touchline, tantalisingly swept forward, veered away from the hesitant Andy Considine and lofted over a delicate cross that completely eliminated keeper Freddie Woodman.

Dembele surged into position, craned his neck forward and made solid contact with his head to send the ball colliding into the back of the net from virtually under the crossbar.

It was a goal the Hoops richly deserved as they dominated the first-half of a meeting with a Dons outfit lacking the guile of on-loan Celt Ryan Christie and the drive of banned skipper Graeme Shinnie in the middle of the park.

In the 17th minute, Scott Sinclair curled over a menacing left-wing corner-kick that completely flummoxed Woodman as it carried to the far post before it struck the top of the bar and Derek McInnes’ men breathed a collective sigh of relief.

The champions also knocked on wood in the 35th minute as the home side once again escaped with their goal intact.

Forrest had an effort blocked and the ball rebounded to the impressive Olivier Ntcham 25 yards out.

The Frenchman bent a beautiful low drive round the packed penalty box to leave Woodman helpless, but the effort smacked against the foot of the keeper’s left-hand post and ricocheted to safety.

Celtic, in fact, should have taken the lead in the 19th minute when Sinclair played in Dembele smack in front of goal.

However, the frontman’s first touch was clumsy and Woodman managed to scramble the ball clear.

It came back to Rogic, but, unfortunately, the Aussie went for power rather than precision and smashed a shot straight at the goalie.

A minute later, a long ball from Ntcham found Scott Brown surging in behind the retreating Dons defence, but the skipper scooped the ball over the bar.

The visitors dominated the first-half and the home side’s only genuine chance came early in the game when a right-wing free-kick from Kenny McLean cleared the defence with Kari Arsnason coming in at the back post.

Doris de Vries elected to remain on his line, but, thankfully, the defender’s timing was off and the ball sailed to safety.

Then Dembele got the effort that mattered and gave Celtic a cushion going into the second-half. 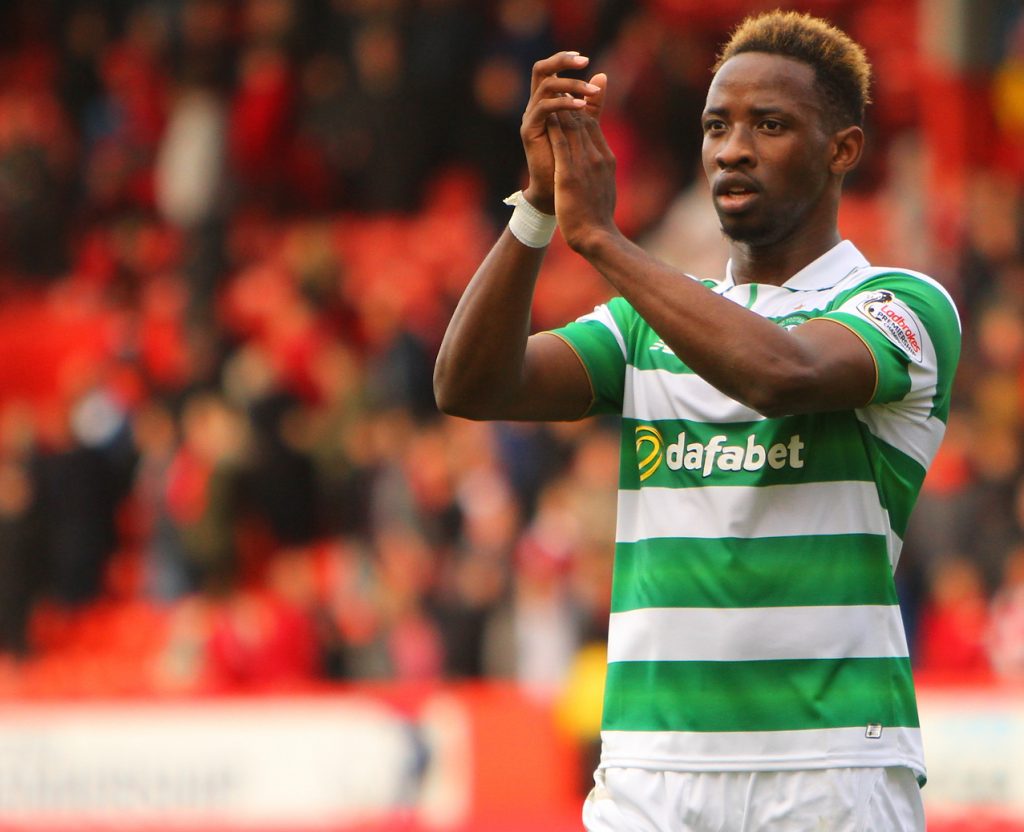 After the interval, a breakaway goal looked on when the defence cleared a set-play and Forrest galloped forward with Tierney and Sinclair taking up good positions. Unfortunately, on this occasion, the winger’s elevation was not quite as crisp or accurate and hit Shay Logan and the chance was lost.

Just before the hour mark, Jozo Simunovic flattened team-mate Kristoffer Ajer in a clash of heads and the game was held up for three minutes while the Norwegian received treatment before returning to the action.

In the 71st minute, the Bosnian international failed to clear a long ball into the box and McLean outmuscled him before battering a close-range angled shot at goal.

De Vries beat the ball away and the combined efforts of Simunovic and Ajer cleared Niall McGinn’s follow-up effort.

A minute later, Rodgers introduced Callum McGregor for the tiring Rogic, but the Irishman’s plans were thrown into disarray in the 75th minute with Lustig’s silly sending-off.

The Swede, who has been toiling for form in recent games, had already been booked in the first-half when he carelessly gave the ball away to former team-mate Gary Mackay-Steven.

Lustig then clumsily clashed with the winger and referee Bobby Madden was swift to reach for a second yellow card to dismiss the right-back.

A few minutes later, Rodgers took off Forrest to put on Jack Hendry in an effort to shut off the danger down the flank.

Six minutes later, he used his third and final substitute with Odsonne Edouard replacing Sinclair who had faded somewhat in the second period.

It looked like a backs-to-the wall situation for a team that must have been leg weary following their extertions in midweek, but the players came up with the perfect respone in the face of adversity.

They scored a second goal in the 83rd minute.

The defence cleared yet another free-kick and the ball landed at the feet of Dembele who powered forward with real threat.

Tierney matched his stride with a lung-bursting run on the left and he was picked out perfectly by the French Under-21 international.

The left-back raced onto the pass and, from 16 yards, pulverised an unstoppable drive wide of the despairing Woodman.

That was the end of the game as a contest and three well-merited points were heading back to the east end of Glasgow, but it wasn’t the end of the drama.

Logan followed up to thump the ball off the head of the stricken Celt, but got away with his stupid and needless action.

All in all, a satisfying afternoon for Rodgers and his troops as they stretched their lead to nine points again in their pursuit of their seventh successive Premiership crown.