SCOTT SINCLAIR’S long-term future at Celtic is in doubt.

The in-form English forward, who turns 30 this month, is coming out of contract after his £4.5million switch from Aston Villa in August 2016 as one of Brendan Rodgers’ first signings for the club.

However, according to a report in the Sun, Sinclair is still awaiting word from Hoops chief executive Peter Lawwell to hear if the champions will invoke the 12-month option they have on his current deal.

If the hierarchy decide otherwise, the popular former Swansea and Manchester City raider can walk for FREE.

The player has scored 17 goals this season after claiming 25 strikes during his debut campaign north of the border in which he won several Player of the Year honours.

Neil Lennon is a known admirer of Sinclair, but his own future at the club is also uncertain after his return on an interim basis following the sudden departure a week ago today of Rodgers for mid-table Leicester City.

Sinclair appeared unsettled at the start of the season when he was relegated to bit-part roles and appearances from the substitutes’ bench, but he turned his fortunes around with a back-heel winner against Aberdeen at Parkhead on September 29 after replacing the crocked Odsonne Edouard. 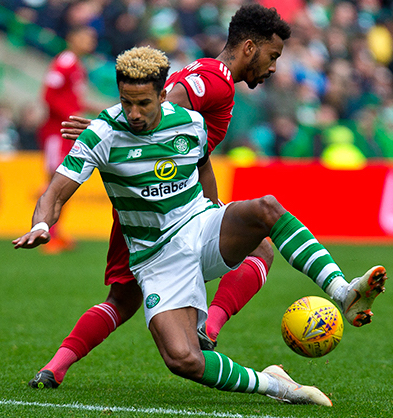 ON THE BALL…Scott Sinclair tangles with Dons defender Shay Logan.

CQN spotlighted the summer of upheaval that awaits the champions with a whole host of players poised to leave the club.

We highlighted the fact an ENTIRE team is on the brink of quitting with Dedryck Boyata leading the exodus at the end of his contract.

Others who could follow are on-loan stars Filip Benkovic (Leicester City), Timothy Weah (Paris Saint-Germain), Oliver Burke (West Brom) and Jeremy Toljan (Borussia Dortmund) who are poised to return to their parent clubs at the end of the campaign.

Mikael Lustig is in the same situation as Sinclair with the club having the right to exercise a 12-month option while Emilio Izaguirre and Cristian Gamboa will also be allowed to walk away for nothing.

Midfielder Scott Allan, who hasn’t figured at all this term, has already agreed a pre-contract with Hibs.

Veteran Dutch keeper Dorus De Vries, another early signing from Rodgers, will be on his way and Scotland international No.1 Craig Gordon is likely to consider his future after losing his first team place to Scott Bain.

Marvin Compper, undoubtedly one of the worst signings in the club’s history, has made only one appearance since his £1.3million arrival from RB Leipzig in January last year and still has 18 months left on his contract.

The title kings will discuss a deal to get him off the wages.