Celtic Quick News on News Now
You are at:Home»Latest News»TOP-EARNER KLIMALA ON A LOSER
By CQN Magazine on 17th May 2021 Latest News

HIGH-EARNER Patryk Klimala suffered defeat on his debut for New York Red Bulls at the weekend.

The former Celtic striker, who joined the MLS club for £3.5million last month, came on as a substitute at the start of the second-half in the 1-0 loss in Philadelphia.

Klimala’s wage details have been revealed showing he is picking up £15,000-per-week to rake in almost £800,000 per year in his four-season deal. He is the top earner at his new club and made his first appearance as the Big Apple outfit trailed to a ninth-minute strike from Union hitman Cory Burke. 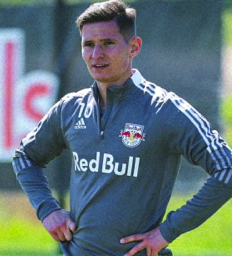 CASHING IN…top-earning Patryk Klimala who fired blanks on his debut.

The 23-year-old Polish forward, who netted three goals in his 15 months at the Hoops, failed to make an immediate impact when he collected a rebound off keeper Andre Blake, but elected to attempt a cross instead of shooting and the opportunity was lost.

Red Bulls substitute Dru Yearwood, who came on in the 76th minute, earned two yellow cards within a 13-minute span and was dismissed two minutes into stoppage time.

Klimala will be hoping for better luck with the New York club play New England on Sunday.