DERMOT GALLAGHER, the former English top-flight referee, has shot down claims by Dundee United boss Tam Courts his side were denied a penalty-kick in the 1-1 draw with Celtic at the weekend.

The Tannadice gaffer was convinced match official Kevin Clancy should have pointed to the spot following a clash between Hoops central defender Cameron Carter-Vickers and striker Nicky Clark.

The on-loan Spurs US international challenged his opponent in a robust manner that saw the forward tumble to the ground while his manager and team-mates shouted for the award.

But Gallagher pointed to a coming together seconds earlier when United’s Peter Pawlett bowled over Carter-Vickers’ fellow-defender Carl Starfelt in the build-up to the move. 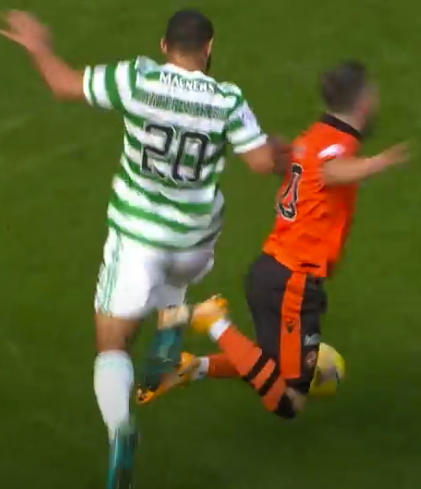 GOING DOWN…Nicky Clark takes off after a challenge from Cameron Carter-Vickers.

The one-time Premier League whistler insisted Clancy judged both incidents unworthy of a foul and was consistent in applying the laws of the game.

Gallagher, speaking to Sky Sports News, said: “The one thing I’d say about this, you ask for consistency, well I think the referee is consistent.

“I think there’s a foul on the Celtic player (Starfelt) just before.

“It’s almost identical to that (Carter-Vickers’ challenge) so he’s allowed both to go with physical contact. He didn’t give either.

“What he’s decided is that both are comings together and he’s judged both of them to be the same in a couple of seconds.”

CQN‘s match reporter didn’t think the incident even rated a mention for the very reason Gallagher flagged up. Clancy could have shut down any claims by awarding Celtic a free-kick after an obvious shove on the Swedish centre-back by Peter Pawlett.

In fact, the visiting manager should have been thanking his lucky stars his team were not down to 10 men in the first-half after Jeando Fuch’s dangerous over-the-top tackle on James McCarthy.

The match official was content to issue a yellow card, but another ref on another day would have banished the Cameroon midfielder and there would have been no argument.

McCarthy, who came in for some rough treatment from the visitors, was clearly unhappy with the challenge, as CQN reported. The Republic of Ireland international didn’t appear for the second-half with Ange Postecoglou taking no risks while replacing him with Ismaila Soro.