GORDON STRACHAN is on his way back to Celtic along with his former star striking double-act Chris Sutton and John Hartson.

The trio have joined forces as the nine-in-a-row champions prepare for the launch of the ‘Pass to Paradise’ – the fans’ Virtual Season Ticket – for what Neil Lennon insists will be a “monumental season”.

Strachan was the manager in 2005 after succeeding Martin O’Neill and he had Sutton and Hartson leading the team to the title at the end of an exciting campaign.

Scotland’s title kings, who have won 51 flags in their glorious history, will kick off their bid for 10 in a row when they take on Hamilton Accies in the season 2020/21 opener at Parkhead on Sunday, August 2.

And the club have been working hard behind the scenes to make sure everything is running smoothly for the big kick-off.

They issued a statement to keep their supporters up to date with everything that is going on. It read: 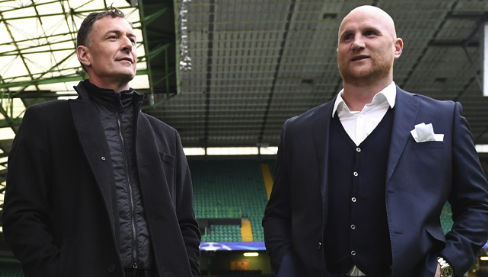 TIC TALK…Chris Sutton and John Hartson will join forces again for Celtic TV at the start of the new season.

Our priority remains getting fans back in Celtic Park and filling the stands with our world famous support, but until it is safe to do so, we have invested in the ‘Pass to Paradise’ streaming platform to deliver the best possible match experience for our Season Ticket holders through their Virtual Season Ticket.

As well as a new open-air studio, we are delighted to announce that some of the biggest names in the industry will be joining us as the new season gets underway.

Our matchday line-up for the season ahead will include Chris Sutton, John Hartson, Gordon Strachan, Michael Stewart and BT Sport’s Rory Hamilton on commentary. These stars will join our existing Celtic TV presentation team and will feature across the season.

You will receive your ‘Pass to Paradise’ login details very soon as well as a schedule of test matches, allowing you to access the streaming platform before the season starts in earnest.

Get set-up for the new season today by making sure we have the most up to date contact details for you:

Our ‘My Celtic Network Guide’ is available to download if you are new to online ticketing.

The Champions are about to embark on the most important season in the club’s history and while we cannot get you into Paradise, we will do our very best to bring Paradise to you.