THE transfer window will close in four days’ time and the clock is ticking on Neil Lennon’s efforts to strengthen his Celtic squad for what he terms a “monumental” campaign.

It’s obvious the champions urgently require a left-back to share first-team responsibilities with Greg Taylor now the blundering Boli Bolingoli has been packed off to Turkey on a season-long loan.

CQN has been looking at the marketplace to bring the latest transfer updates.

The nine-in-a-row champions have made a move for Spurs’ left-sided flyer Ryan Sessegnon, who plays football much in the same adventurous manner as Jeremie Frimpong on the opposite flank.

The London club paid £25million to whisk him from Fulham last summer, but the player has failed to impress Jose Mourinho and looks to be on his way out with a loan the ideal solution. He was pushed further down the pecking order following the recent arrival of Sergio Reguilon from Real Madrid.

Reports insist the Hoops have made an approach, but 20-year-old Sessegnon, who has made only 12 appearances for Spurs since his big-money switch, is also on the wanted list of West Ham, Brighton and Leeds United, as CQN reported yesterday.

Finances are likely to present a stumbling block, though, which could scupper a move. 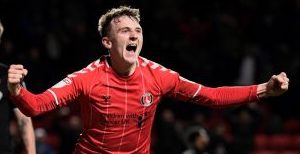 UP IN ARMS…Alfie Doughty has something to shout about.

The Parkhead side also have Charlton Athletic’s left-sided midfielder Alfie Doughty in their sights and have already had two reported bids for the 20-year-old rejected by the third tier club.

The Hoops hierarchy are believed to be putting a third financial package together for the highly-rated youngster, this time around the £800,000 region.

Doughty appears keen to shift to Scotland and will be able to sign a pre-contract in January with his deal at the London club expiring in June next year.

Leeds United’s Barry Douglas has also been mentioned for the No.3 position and the former Scotland international has not played for the Premier League new boys this season.

Sampdoria defender Omar Colley has also been linked, but it has now emerged the centre-half is a target for London duo West Ham and Fulham, according to a report on an Italian website.

It seems certain the player will quit the Serie A side before Monday with the England capital his more likely destination.

And there have also been reports from across the border stating there is interest from Lennon in Stoke City winger Tom Ince, son of former Liverpool and England midfielder Paul.

The 28-year-old does not figure in manager Michael O’Neill’s long-term plans and will be allowed to move on. West Brom, too, are monitoring his situation, according to teamTALK.

* DON’T miss the unbeatable match report from Sarajevo v Celtic this evening – only in your champion CQN.