CELTIC face a “treacherous” route through the Champions League qualifying campaign – but they can NOT afford to fail for the third consecutive season.

That’s the firm warning from former Hoops frontman Chris Sutton who has warned his old club they must avoid the banana skins in the revamped rounds ro reach the cash-rich group stages.

Last year, the wheels came off the campaign to get through to the glamour evenings of Europe’s elite competition when Neil Lennon’s men crashed 4-3 to Cluj in Glasgow after returning from Romania with a well-earned 1-1 draw.

The previous term saw Brendan Rodgers’ outfit fail miserably against a mediocre AEK Athens side as they were held to a dismal 1-1 draw at Parkhead before toppling to a shocking 2-1 loss in the Greek capital against a team that lost all six of their section games.

Sutton has warned his ex-colleague Lennon to tread carefully and, speaking to the Daily Record, said: “Facing three one-off ties before the two-legged play-off round to get to the group stage is not ideal – but nothing is ideal right now and UEFA have had to find a way to pack in a lot of football in to a short space of time. 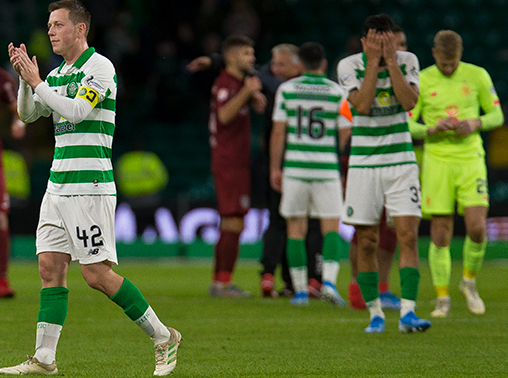 “It’s understandable, but it doesn’t half take away the safety net. There can be no Lincoln Red Imps nights now, that’s for sure. Celtic will be walking a tightrope in the qualifiers and there won’t be much room for a dodgy 25 minutes, never mind an off night.

“When there are two legs you always feel confident of taking care of business in the home leg, even if the way result is not quite the best.

“Teams have said over the years they’ve found Celtic Park to be an intimidating environment and you can go back to my time at the club to see how strong we were at home.

“That fear factor will be gone behind closed doors, but motivation shouldn’t be a problem for the Celtic squad.

“They also can’t complain about getting caught cold. I know it’s a staggered start due to restrictions, but they will have about six weeks of pre-season under their belts and, hopefully, the Premiership will get under way on August 1 as planned.

“It will be treacherous, but Celtic cannot afford – in every way – to miss out on the group stage for a third year in a row.”