Celtic Quick News on News Now
You are at:Home»Flashback»TREBLE TREBLE: ‘PHENOMENAL. HE DESERVES IT,’ BROONY’S REACTION TO BOSS LENNY
By CQN Magazine on 25th May 2020 Flashback

SCOTT BROWN is convinced Neil Lennon is the right man to lead Celtic to nine in a row and beyond.

The champions pulled off a truly remarkable feat of winning the treble treble with their dramatic 2-1 triumph over a gallant Hearts side at Hampden yesterday.

When Odsonne Edouard plonked the ball behind keeper Bobby Zlamal in the 82nd minute he made certain the ninth piece of domestic silverware in a glorious three-year sequence was once again heading for the Parkhead trophy cabinet.

The champions will now draw breath in the summer and start all over again in July when the Champions League qualifiers kick off.

And skipper Brown, who lifted his NINETEENTH Hoops honour at the national stadium following the latest victory, believes Lennon is the man to lead the team to greater glorious.

The 33-year-old midfielder spoke to the Scotsman about the reaction from his team-mates when they learned the Irishman had landed the job on a full-time basis after coming in for Brendan Rodgers in February in an interim capacity.

Brown said: “We all found out on Twitter and all the lads are diving about in the changing room. We went out, got the gaffer and brought him back in. The cheer the manager for getting the job – it was phenomenal. He deserves it. It has been a hard one since he came in, but he’s the only man in my eyes for the job. 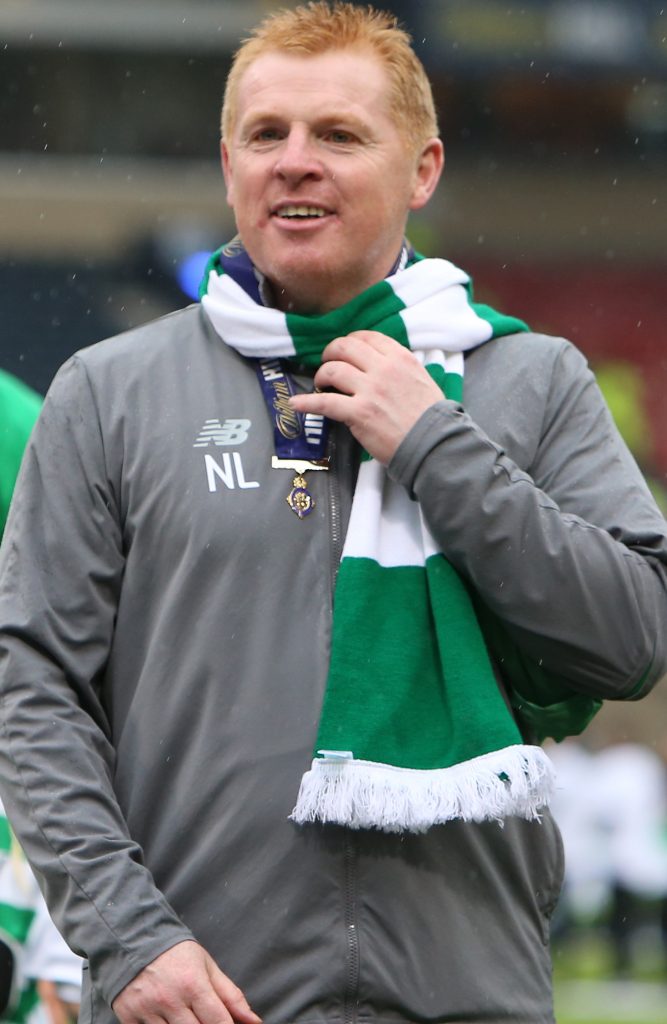 “He has had to win two trophies and yet again he has shown that he knows how to win trophies. He’s a fantastic man manager and he’s been fantastic since he came in. He speaks well and every single one in that changing room loves him.”

Having been at the helm as the club kicked off their eight in a row run of Premiership titles, Lennon, who quit Hibs in January, has been given the role of trying to ease the Hoops towards nine and then the coveted and magical 10-in-a-row.

Brown added: “I don’t think there is a better person for the job. The pressure this job brings on everyone, for us to do eight in a row, for him to push us towards, hopefully, nine, for me shows he’s the right man for the job for the club.

“It’s a great appointment at a great time. We need to push on next season. The Champions League is the big one at the start, we need to make sure we continue the form as we have been.

“The recruitment of players is going to be a thing, there will be a change in the team because of what Brendan had and what Neil is going to go out and do. I’m sure it will be a breeze.

”He has won us the league and won a semi-final and a Cup Final. That shows the kind of man he is.

“He could have distanced himself from the job because of what Brendan did. But when he got called, he answered that call.”