Celtic Quick News on News Now
You are at:Home»Latest News»TROPHY PROCESSION – A WARNING FROM THE PAST
By CQN Magazine on 1st November 2020 Latest News

ABERDEEN will attempt to halt a Celtic silverware procession in the delayed Scottish Cup semi-final at Hampden this afternoon.

The Parkhead men are two games and possibly three hours away from completing a truly extraordinary quadruple treble, their TWELFTH domestic honour in an unprecedented period of domination.

The legendary Jock Stein led the club to their first-ever clean sweep in the glorious campaign of 1966/67 when they lifted their second successive title, beat Rangers 1-0 in the League Cup Final, with Bobby Lennox scoring the matchwinner, and followed that up with a 2-0 Scottish Cup Final success over Aberdeen with Willie Wallace on target twice.

Celtic were favourites to repeat the following season, but their march towards even more glory was derailed in the first round of the Scottish Cup when they crashed 2-0 to Dunfermline – who eventually lifted the trophy by beating Hearts 3-1 – on a gloomy January 27 afternoon at Parkhead 1968.

However, there were still wild celebrations in the east end of Glasgow three months later when Celtic edged towards their third championship on the trot – and the club’s 23rd crown in total.

It was one of the most dramatic, enthralling and nail-biting races for the crown in the Jock Stein era, as author Alex Gordon emphasises in his latest book, ‘Fifty Flags Plus One’.

In another CQN EXCLUSIVE, Alex takes up the story with an edited extract from the tribute book:

On the afternoon of April 20 1968, Rangers fans danced on the Rugby Park pitch as their side claimed a 2-1 victory over Kilmarnock and news had been relayed Celtic had been held 1-1 by Morton in the east end of Glasgow. Someone had jumped the gun. Indeed, there was an almighty struggle going on several miles from that part of Ayrshire, but the last shrill of referee Bill Paterson’s whistle had yet to be heard above a clamorous din.

It was deadlocked at 1-1 as Celtic piled forward, frantically firing all sorts of balls at a variety of angles into a packed Morton penalty area. John Hughes recalled: “We had opened the scoring fairly early when Willie Wallace headed in and we all thought: ‘Right, here we go’.

“Big Jock always stressed the importance of getting that second goal on the off chance something occurred, a mistake, a deflection, a bad bounce, a dodgy call from the ref. Suddenly, a game that is well within your control can get away from you.

“We’ve all seen the better team come off the pitch with nothing to show for it.”

FLAG No.23 IS ON THE WAY…Bobby Lennox scores the last-gasp winner against Morton keeper Andy Crawford in April 1968.

The game was sailing along without the semblance of turbulence of any sort and then, suddenly without preamble, the ground was enshrouded in an eerie chill on the stroke of half-time when Joe Mason scored for the visitors. Hughes adds: “You reach a stage in a game like this when finesse goes out the window. We were a passing team, as everyone knew, and there was a lot of inter-play among the players as we sprayed the ball around, keeping possession and probing for openings.

“Not on that day when we realised we were about to surrender a point and hand the initiative to the team across the city. Half-chances came and went and we just could not get that ball over the line.

“We pummelled the Morton defence that day, absolutely pulverised them, but it looked as though fate was against us. We were all aware it was getting close to the final whistle. I saw the ref checking his watch and thought: ‘Oh, please, give us another five minutes’.’’

Any side with Bobby Lennox hovering around the danger zone will have a chance of a goal. The unassuming Saltcoats man had gone into the match on the back of a phenomenal sequence of eighteen goals in twelve successive league outings. Was he about to fire a blank against Morton? With less than a minute to play, we got the answer and the anxious wait was over for thousands of witnesses, each and every one of them fraught with anxiety. 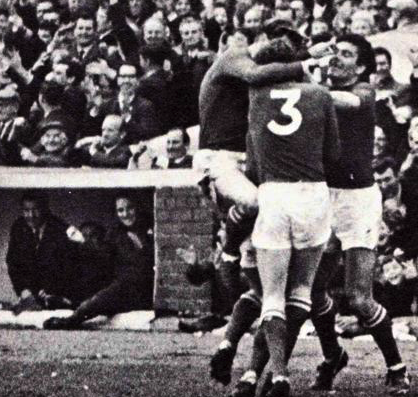 “It’ll never win a Goal of the Season award,” smiled Big Yogi. “It might not even have been a contender for Goal of the Game, but it didn’t really matter. There it was, the ball in the net and we were all running around and hugging each other.

“As I recall it, a cross came into the box, it was half-cleared, fell to the feet of Wee Bobby and I think he simply nudged it over the line from a couple of yards at the back post. It was sheer bedlam. We trotted back up the pitch, Morton kicked off and the referee blew for full-time. Aye, it was that close.”

Two goals from Lennox made absolutely certain as Stein’s men fought back from an interval deficit to win 2-1 against Dunfermline at East End Park the following week. Ttitle No.23 was back home in Paradise.

* ‘CELTIC: 50 Flags Plus One’ celebrates the club’s remarkable fifty-one league championships in a glorious history. The book will be published this month. Watch CQN for details.