BREATHTAKING skill overcame brute strength as Celtic swept past the rugged challenge of Hearts’ boot boys at Tynecastle this afternoon.

The Edinburgh side halted the Hoops’ phenomenal 69-game unbeaten sequence in December when they swarmed all over their opponents and capitalised on an uncharacteristic slack performance.

Craig Levein tried the same tactics again, but this time to no avail.

It looked as though skipper Scott Brown had been clearly targeted as a marked man by the hosts, but, at the end of a mainly ferocious confrontation, the captain sauntered off with a big smile of his face.

Once again, the master of all he surveyed. And that must have been a massive source of annoyance for the Hearts players and their followers. 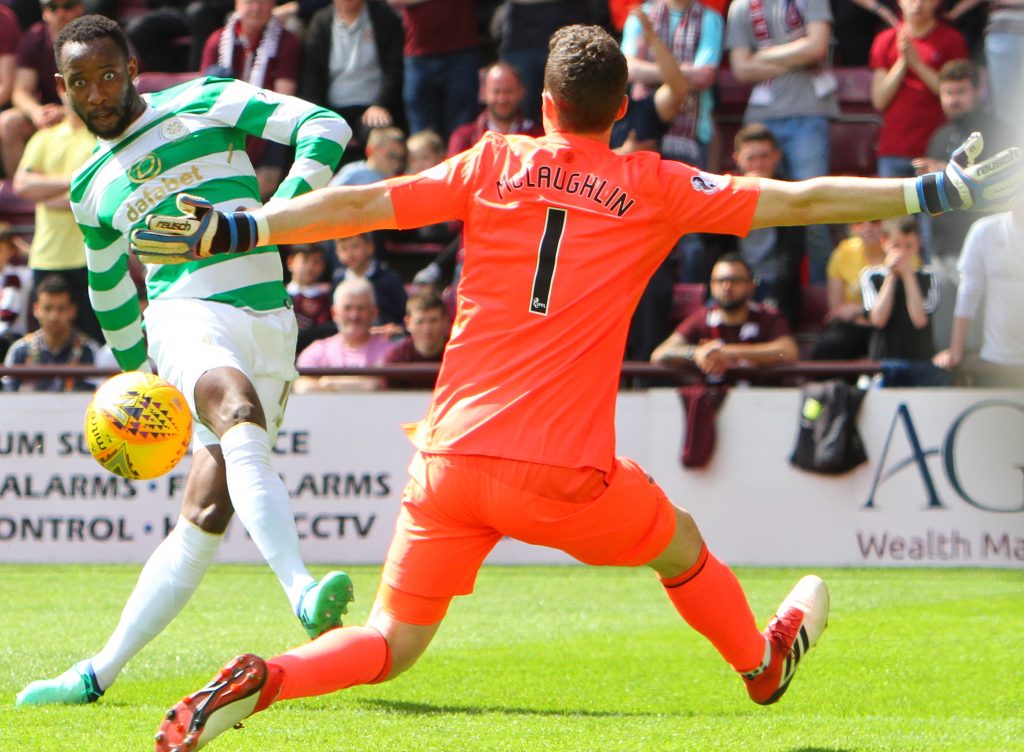 THE EYES HAVE IT…Moussa Dembele sweeps No.2 past Hearts keeper John McLaughlin.

Kyle Lafferty walloped the home team into the lead, but the champions responded with attitude on this occasion and Dedryck Boyata levelled before the interval and Moussa Dembele and substitute Scott Sinclair added to the scoreline in the second period.

Brendan Rodgers waited at the interval to have a chat with referee Bobby Madden as the teams left the pitch. His first question could have been: “Do you have a clue about the laws of the game?”

The match official made a series of baffling decisions that left the Hoops boss, players and fans more than just a little mystified.

Steven Naismith assaulted Brown with a stamp on his groin off the pitch in the ninth minute and, remarkably, Madden saw nothing untoward and waved play on.

There should have been little debate – it was a red card offence and the former Sevco player was extremely fortunate to escape.

Shortly afterwards, Naismith left James Forrest writhing in pain after his right boot made contact with the winger’s left ankle, but once again, according to the ref, there was no wrongdoing.

Madden did book Hearts trio Ross Callachan, Laffery and Joaquim Adao, as well as the Hoops’ Callum McGregor, in a towsy first 45 minutes where the home side were firing into challenges with a fair bit of verve and gusto all over the pitch. 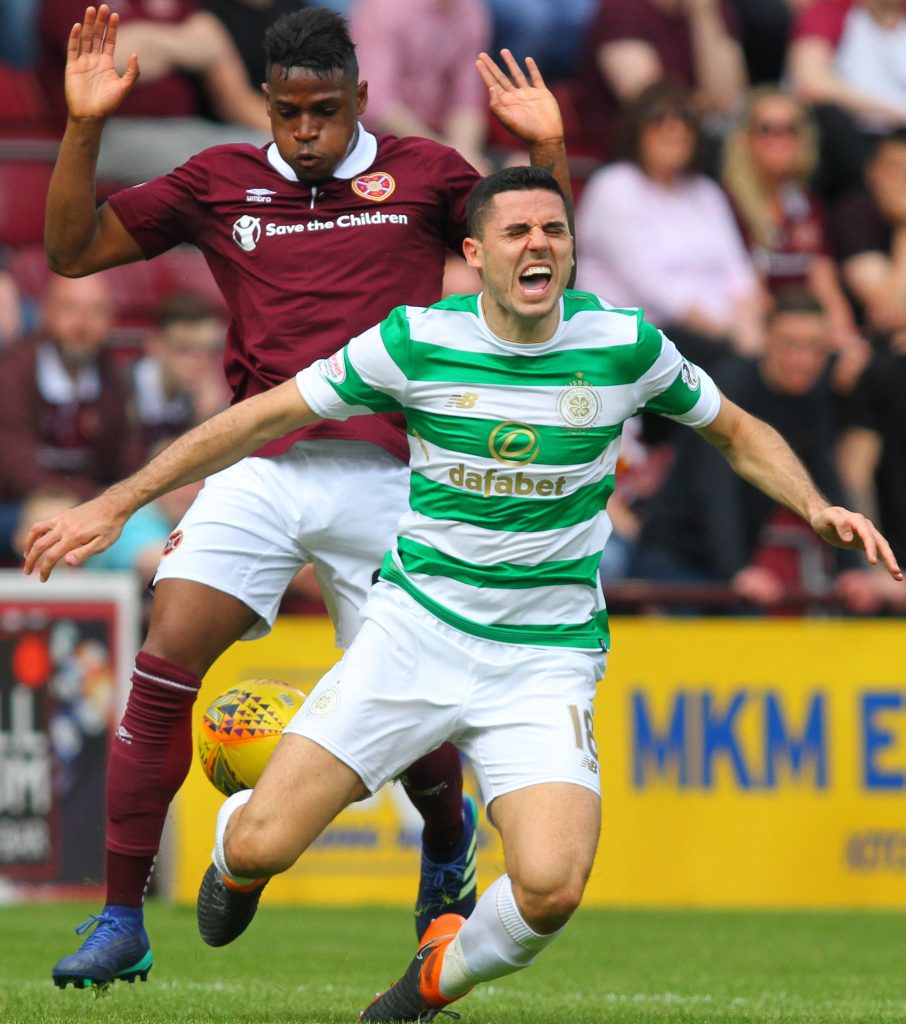 OUCH! Tom Rogic winces in pain as he is tackled from behind by Joaquim Adao.

Nothing wrong with that if it is within the letter of the law, but it looked as though the Edinburgh players were taking advantage of the apparent leniency of the man in charge.

In the 15th minute, the ungainly Lafferty clearly pushed Mikael Lustig and the ball hit off his shin to go over the byline. The Swede wasn’t too enamoured when Madden awarded a corner-kick.

It was the home side’s turn to complain when John Soutar forced the the resultant kick over the line from close range, but the ref had already blown for a foul on comeback keeper Scott Bain.

Hearts did have the ball in the net again in the 18th minute – and this time it did count.

Brown was unhappy as Naismith backed into him and left him sprawling on the turf in the build-up to the goal.

Madden wasn’t interested, the ball dropped to Lafferty who played it onto Lewis Moore and raced into space to collect the return.

Bain didn’t have a chance as the Northern Ireland international made perfect contact with the ball to send a shot screaming high into the net.

But Celtic had a quickfire response three minutes later when they levelled following a sweet free-kick from Olivier Ntcham who ran Tom Rogic close for CQN’s Man of the Match award.

The French midfielder flighted an exquisite diagonal free-kick to the far post and Boyata raced clear of Lafferty to get his head to the ball and send a superb effort swirling across John McLaughlin into the top left-hand corner of the net.

In the 24th minute, Forrest released Dembele and he rushed his final shot and hit the outrushing keeper.

Three minutes later, the petty Naismith kicked the ball against the grounded Lustig who had been floored by a barge in the back from Lafferty. Madden saw nothing.

On the half-hour mark, Forrest was again the architect as he released Dembele and he cleverly lobbed Soutar before lifting the ball over McLaughlin, but his cheeky effort was just off target and bounced off the top of the crossbar to safety.

The French Under-21 marksman had better luck six minutes after the turnaround when Celtic claimed a sublime second goal.

Lustig robbed Moore on the touchline and knocked a pass to Rogic, who, as ever, had found a pocket of space in which to work.

The Aussie picked out Dembele with a marvellous pass off the outside of his left foot and the striker brought it down with assured ease, steadied himself and then rolled an effort wide of the exposed McLaughlin. 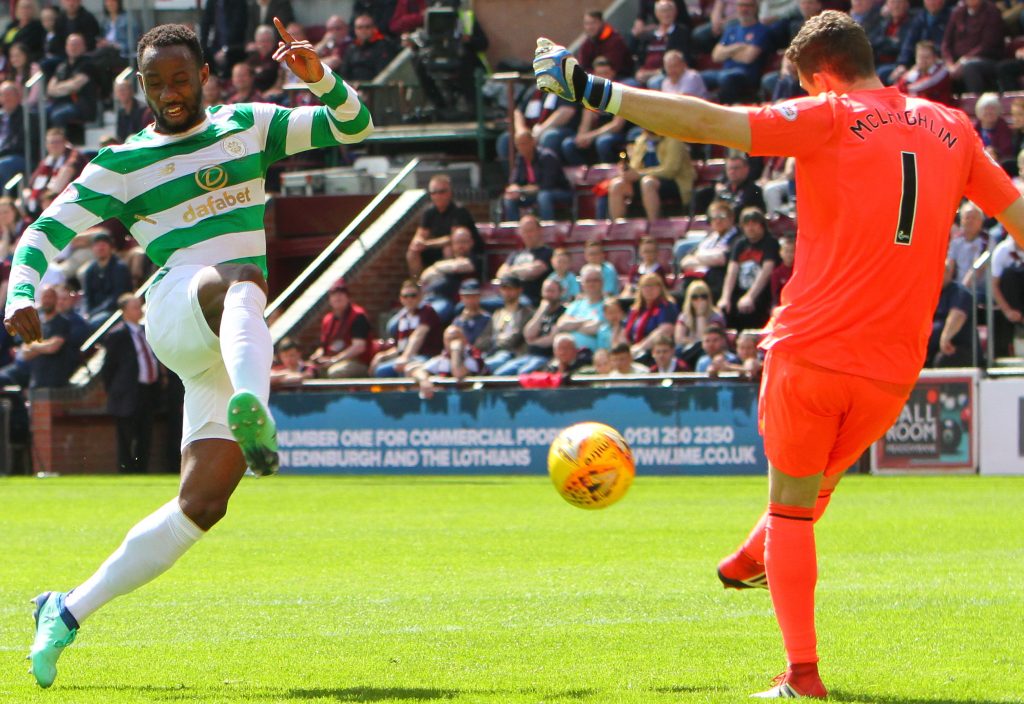 McGregor spurned an opportunity to score a third two minutes later when Brown and Edouard combined to set him free on the left, but he fired his left-foot drive waywardly into the sidenet.

Edouard then limped off to be replaced by Sinclair and shortly afterwards Dembele was taken off with Stuart Armstrong, who clearly needs game-time, coming on.

In the 62nd minute, Sinclair set up Forrest on the edge of the box with a cute backheel, but the raider’s swerving drive swept wide of the far post.

Sinclair and Forrest then combined to allow Armstrong to have a free shot at goal, but he clattered his effort off McLaughlin, a defender hit the rebound off Rogic and the ball bounced back to strike the base of the upright in a crazy moment of ping-pong football in the penalty box.

In the 82nd minute, Patrick Roberts came on for Rogic who received a standing ovation from an appreciative travelling support.

Two minutes later, the little Englishman displayed some mesmerising footwork on the touchline to leave two defenders kicking fresh air, but Forrest wasted the move by whipping his shot over the bar.

Four minutes into stoppage time, Celtic got the third goal they so richly deserved as their true grit performance was rewarded.

Armstrong shimmied his way past three tackles as he surged in from the right before rolling a pass in front of Sinclair on the six-yard line.

The flamboyant attacker, who had gone 16 games without a goal, made no mistake as he happily blasted it into the net.

Now it’s Kilmarnock on Wednesday night and Aberdeen at Parkhead on Sunday as the curtain comes down on a seventh successive Premiership-winning campaign.

And then all eyes will be on Hampden and the Scottish Cup Final on May 19 with history beckoning for Brendan Rodgers and his unstoppable Hoops. 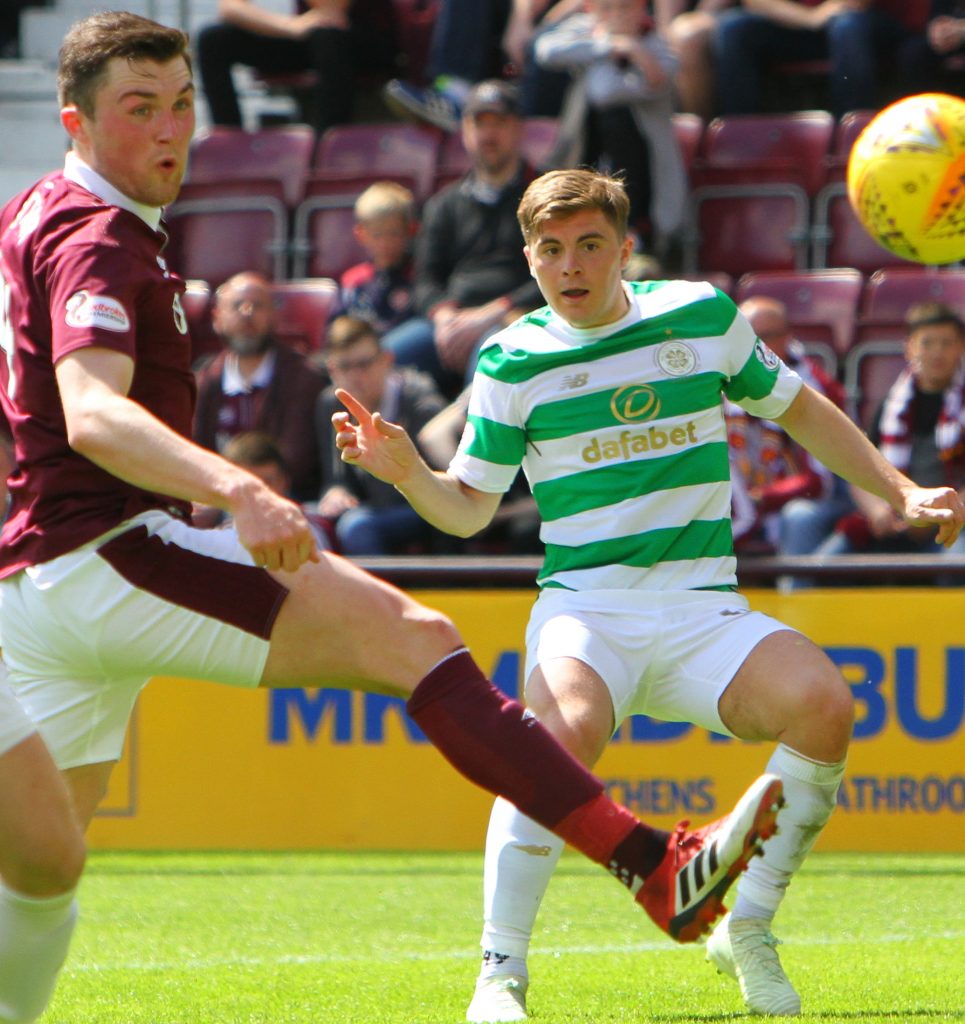 SO CLOSE…James Forrest whips a shot past John Soutar, but also just wide of the post. Pictures: Geo.