That is the sensational report in a national newspaper this morning that claims the under-pressure Ibrox club will take stringent action following an unacceptable flare-up after the Scottish Cup semi-final exit.

Thirty-eight-year-old striker Miller, who was an unused substitute, is out of contract in the summer and will be told his Ibrox career is over.

According to the report, the remainder of his deal will be paid in full and then he will be shown the door.

Wallace, 30, has had a wretched campaign with injury and hasn’t made a first team appearance since September.

There are now doubts if the Scotland international defender, who wasn’t stripped at Hampden, will play again for the side.

Under the headline ‘GERS AXE LEE AND KENNY’, there are claims Wallace, who still has a year to run on his contract, vented his anger and frustration towards caretaker manager Graeme Murty after the humiliation.

He has been accused of showing the boss a lack of respect with his outburst. 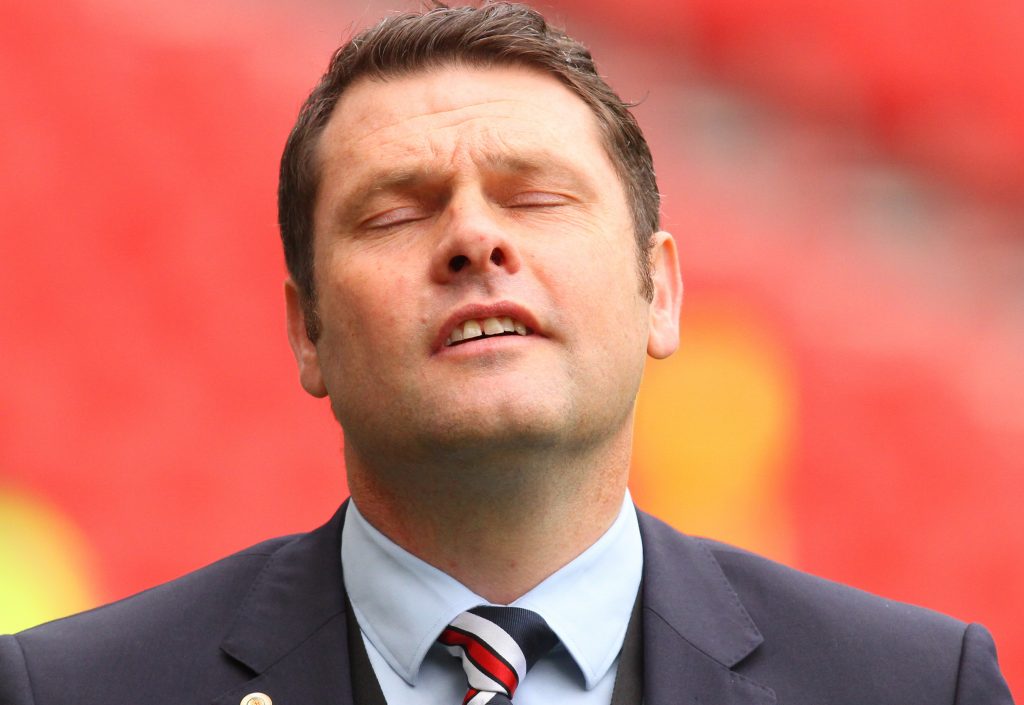 UNDER-PRESSURE…Graeme Murty’s hopes of getting Ibrox manager’s job are in tatters.

Miller is believed to had his say, too, and Murty refused to accept the criticism of the players.

In his aftermatch press conference, he admitted: “There was emotion, anger, disappointment — all the things you’d expect after a game like that.”

Now, though, there are claims Murty has held talks with Ibrox directors and decided he wants Miller and Wallace out of his squad for the remaining five games of a troubled season.

The former Under-20 youth coach, who took over from the axed Pedro Caixinha in October, will also have to deal with dissent displayed by a raging Andy Halliday and Daniel Candeias when they were substituted against Celtic.

There were also claims warring pair Alfredo Morelos and Greg Docherty had to be pulled apart as they came to blows in the tunnel at the end of the game, as reported in CQN yesterday.

In the midst of the turmoil in Govan, it looks almost certain Murty has blown his chance of getting the manager’s position on a permanent basis.