DAVID TURNBULL’S £3.25million move to Celtic is in jeopardy after another day of high drama in the transfer saga.

The deal was expected to finally get the green light yesterday, but an issue was flagged up during his second medical.

The 19-year-old Motherwell midfielder travelled to Manchester for what was expected to be the completion of formalities.

However, a red flag was raised by medics to leave the proposed switch in the balance with talks now set to continue today between the champions, the Fir Park outfit and the player’s representatives to try to find a solution. 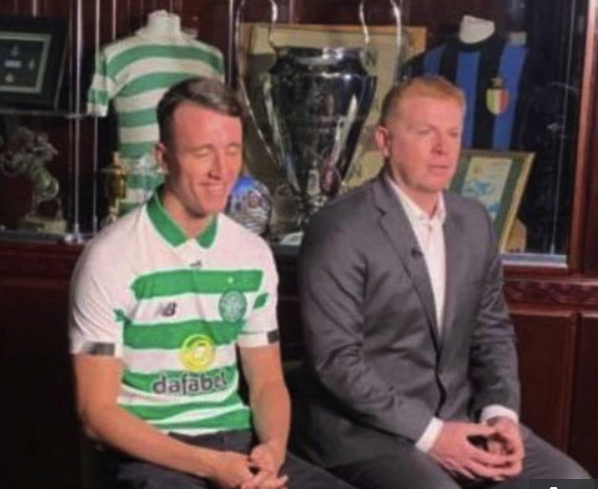 BEFORE THE HITCH…David Turnbull with Neil Lennon ib the Celtic boardroom on Friday.

Complications have arisen from day one in the proposed switch with Well accepting the Hoops’ original offer, the club failing to agree personal terms with the Scotland Under-21 playmaker, newly-promoted Norwich City entering the scene to invite Turnbull to Carrow Road and the youngster emerging to perform a remarkable U-turn and insist Parkhead was his preferred destination.

It looked as though the deal would be rubberstamped last Friday with the player photographed wearing a Celtic shirt alongside manager Neil Lennon in the club’s boardroom.

Fresh concerns grew when the move wasn’t signed off over the weekend and speculation intensified when he failed to join the team’s pre-season traing camp in Austria, as CQN reported yesterday. It’s still conceivable Turnbull WILL join the Hoops – and there are reports of the top prospect being confident that will be the case – although it is highly likely the terms of the deal will have to be renegotiated.

An agreement could be thrashed out within the next 48 hours to allow the SFWA Young Player of the Year to finally pen a four-year contract.