Celtic Quick News on News Now
You are at:Home»Latest News»TURNBULL: ‘YOU WILL SEE MORE AS HE GOES ON,’ INSISTS DELIGHTED BOSS
By CQN Magazine on 28th September 2020 Latest News

DAVID TURNBULL eased into the Celtic pattern when he came on as a substitute at the interval for Ryan Christie in the 3-0 victory over Hibs at Parkhead yesterday.

The talented midfielder is attempting to make up for lost time following the collapse of his move from Motherwell last summer after a problem was detected in his knee during his medical at Parkhead.

However, Turnbull’s wish to play in the green-and-white hoops was granted last month when the champions’ £3.25million bid was accepted for the Scotland international Under-21 playmaker.

The youngster looked at home when he was introduced, tested Easter Road keeper Ofir Marciano with a rasping 25-yard drive and set up Mohamed Elyounoussi for the third goal following first-half strikes from Callum McGregor and Albian Ajeti.

Neil Lennon was delighted with the player’s display – and promised there is more to come as a monumental campaign unfolds. 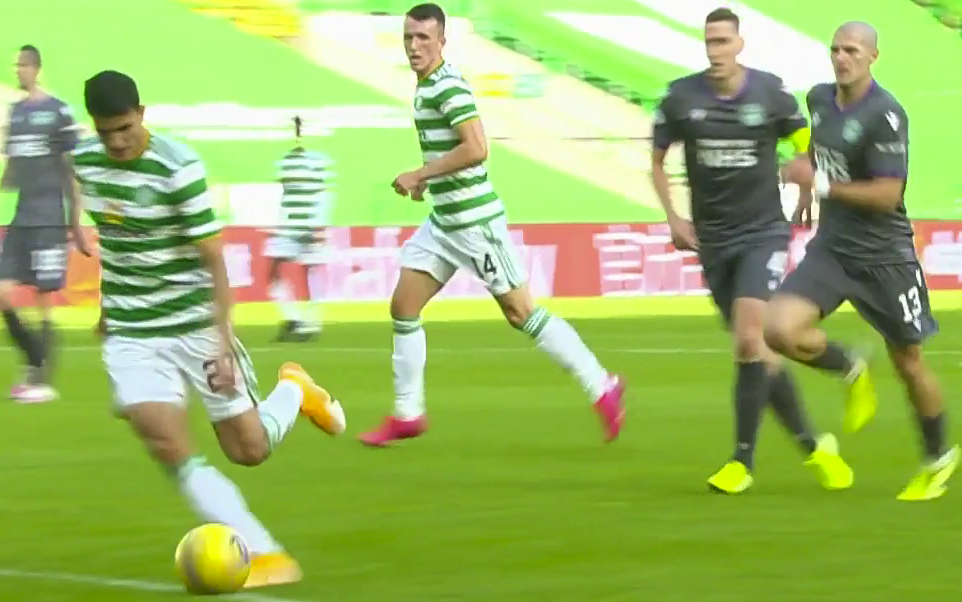 THAT’S MY BHOY…David Turnbull looks on after his pass releases Mohamed Elyounoussi for No.3.

The Hoops boss, speaking to the Daily Record, said: “He did well. Showed great vision and looked comfortable in his environment. He has a bit of work to do. But I was really pleased with his contribution for the third goal and he looked assured out there.

“We think he is a very talented young Scottish player and we are delighted to have him. You will see more as he goes on.”

Lennon also took the time to praise some of Turnbull’s new team-mates when he added: “Jeremie Frimpong was back to form on Thursday night and brilliant. He provides so much enthusiasm and energy and quality to the team. He was outstanding.

“Albian Ajeti and Mohamed Elyounoussi are good players, so I have no qualms about leaving Odsonne Edouard out and giving him a break. He came on and looked good.

“Elyounoussi had another very good game. Intelligent play off the ball and a good finish for the third goal. I am delighted with him, as well.”